The club members had a close connection to the Montreal Lacrosse Club and in those early years they used the Lacrosse Grounds near Crescent street between Ste Catherine and Sherbrooke for cycle training and holding races. 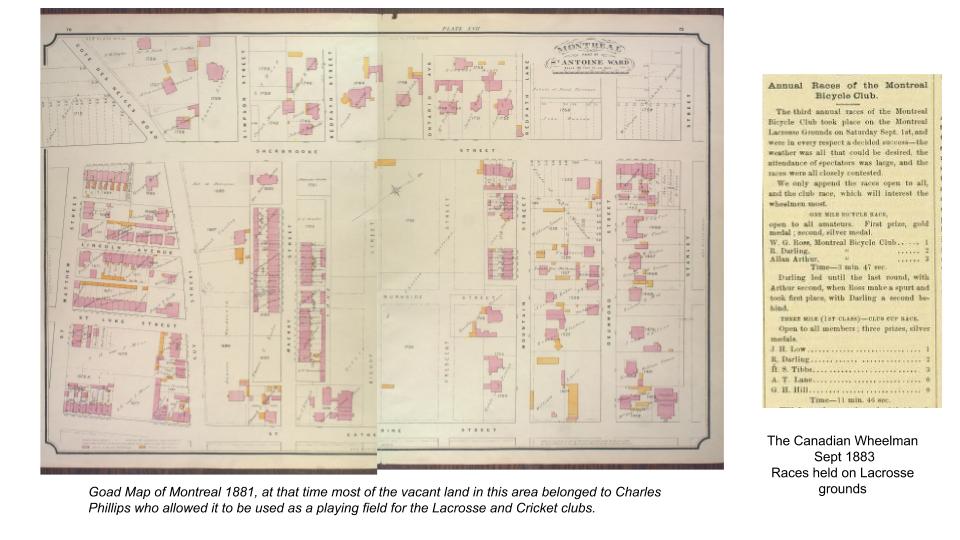 This early cycling venu is now bisected by the Claire Morissette bicycle path on de Maisonneuve Boulevard as it passes by Concordia University.  The Montreal Bicycle Club held annual races on these grounds starting in 1880. 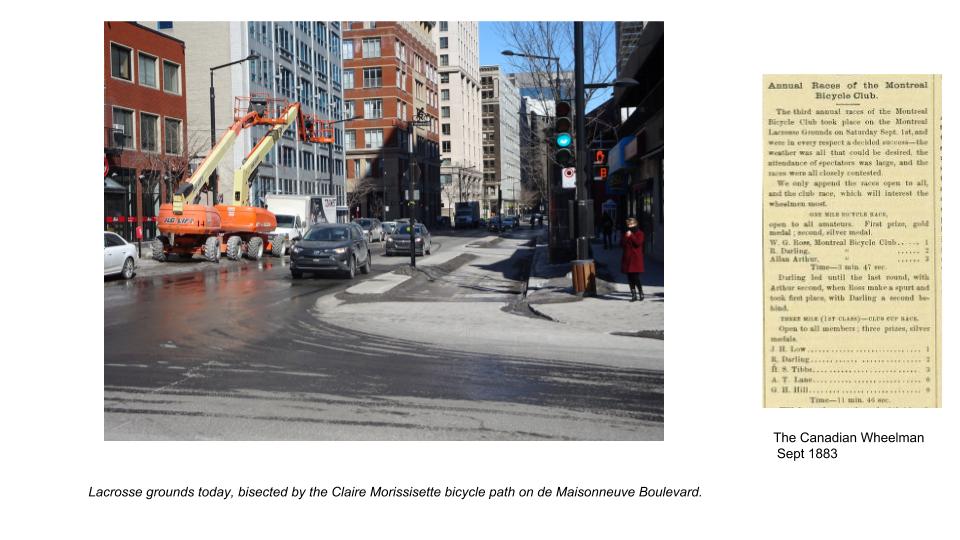 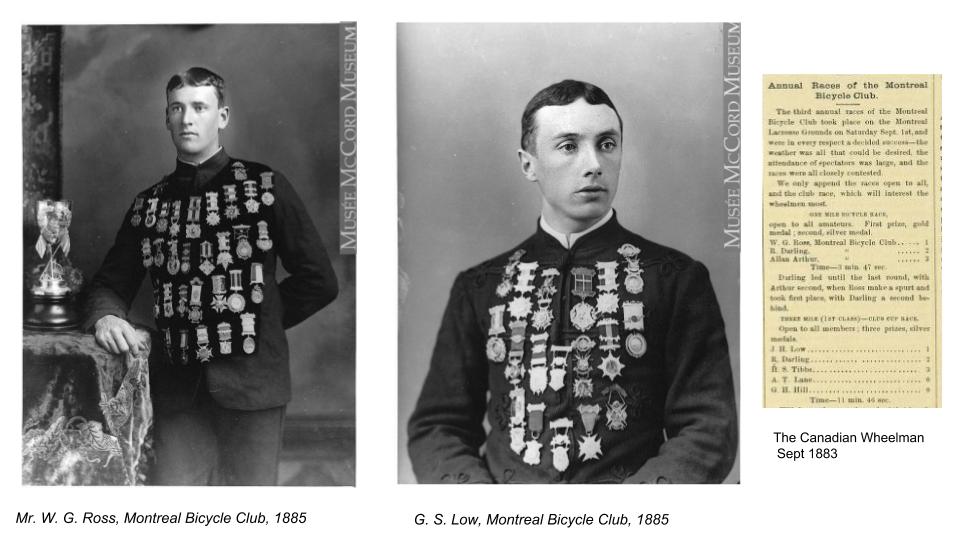 Club events such as rides. races, parades, and social excursions were published as Fixtures in newspapers and clippings were all kept in the minute book.  The club kept accurate records of the rides, their attendance and distance travelled. They had about 3-4 fixtures per week from May to October.  A typical ride would be to Lachine, around the mountain or to the back river. The riders placed an emphasis on putting on a “good show” and would move in tight formation, all high above the onlookers, at human powered speed never seen before.  Bicycle bells would automatically ring after every so many wheel rotations to draw attention to the riders. 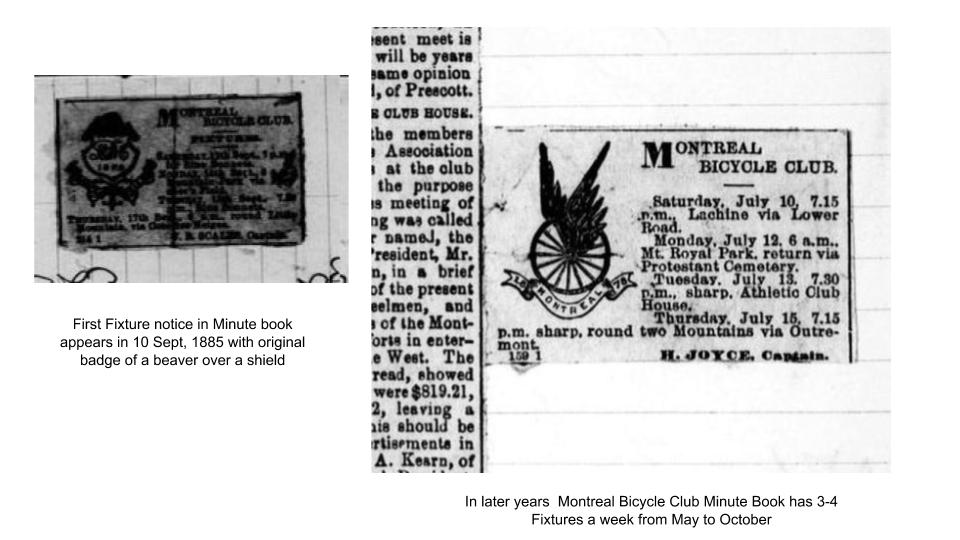 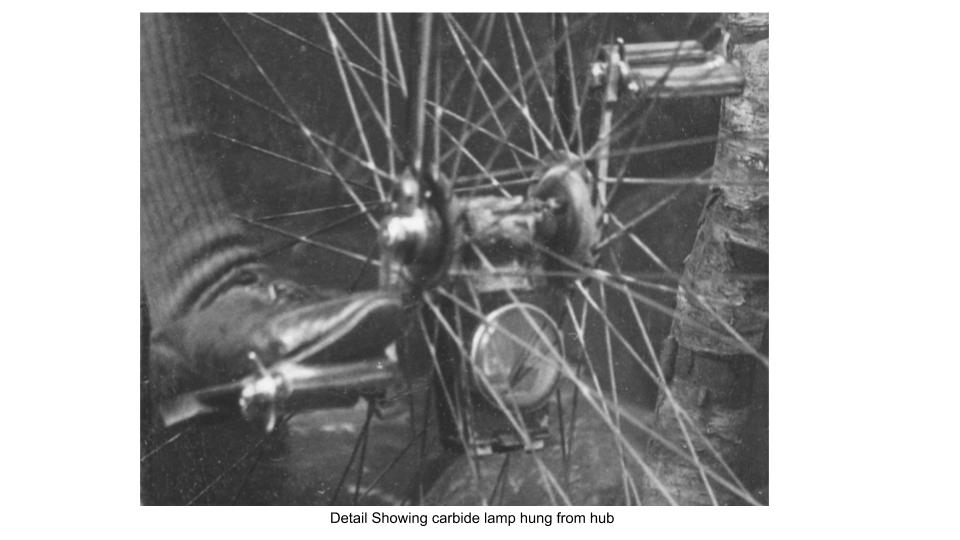 High  Wheel bicycles, in addition to being fast, were also expensive, difficult to ride and very dangerous. In order to mount the machine, one would run alongside, then climb up on the peg to reach the seat. Not having brakes, in order to dismount, one slowed the machine by applying back pressure to the pedals, then climbed back down onto the peg before the machine stopped.  Going over the handlebars, which were referred to as headers, were common occurrences. When going downhill, the bicycle might go so fast that one’s feet could not keep up with the pedals. The recommended practice at this point was to put your legs over the handlebars and coast. That way, if a header occurred, there was a better chance you might not actually land on your head. 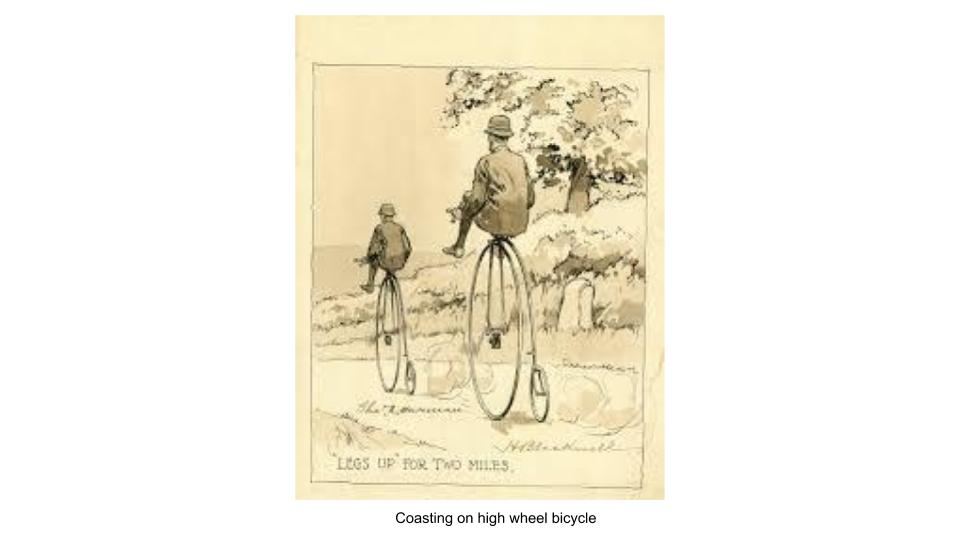 Cycling in the High Wheel era was a risky sport undertaken by wealthy athletic and daring male riders. The first club photograph from 1882 includes a bugle and the club mascot.  Sometimes, on excursions, they carried the club Dawg, Disraeli with them, noting that he would fearlessly “ride like a man”. 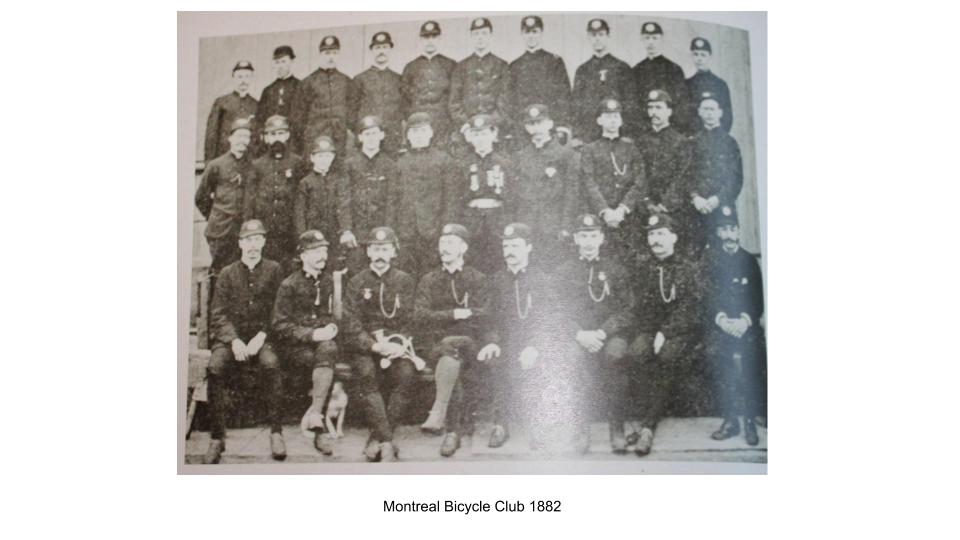 This traditional view by historians that the high wheel era was an exclusive male domain is starting to be challenged however.  Last fall a new book on Louise Armaindo and the High Wheel Racers of Nineteenth-Century America was published. This slide shows a Montreal Gazette article of a 100 mile race held in April 1882 won by Louise Armaindo.  Although she was a French Canadian born near this city, she left home to join the circus and became a trapeze artist before becoming a professional athlete. It was the only time she raced in Montreal, the bulk of her racing was done in the US.  Charles Pratt, as the editor of the League of American Wheelmen (LAW) magazine, was a vocal opponent of bicycle racing by women in particular and wrote of how much he disliked Louise’s performances. He regarded it as something similar to a circus freak show. 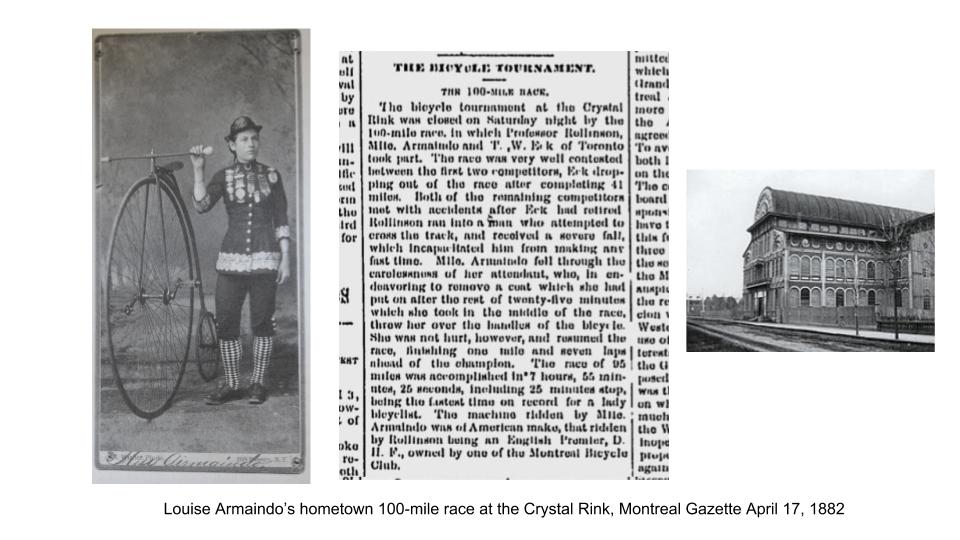 The MBC joined other cycling and sporting organizations shortly after its founding. Indeed, they were closely associated with the creation of these organizations.  First the LAW in 1880, they sent 5 members to Boston to take part in its first annual meet. Next year, in 1881, they merged with the Montreal Snowshoe, and Lacrosse clubs to create the MAAA. This merger took place  in order to purchase a combined clubhouse, the former Montreal Gymnasium building on Mansfield street. The year after that, in 1882, they attended the founding meeting of the Canadian Wheelmens Association in St Thomas Ont,  joining that group in 1883, after a year’s hesitation about leaving the LAW. 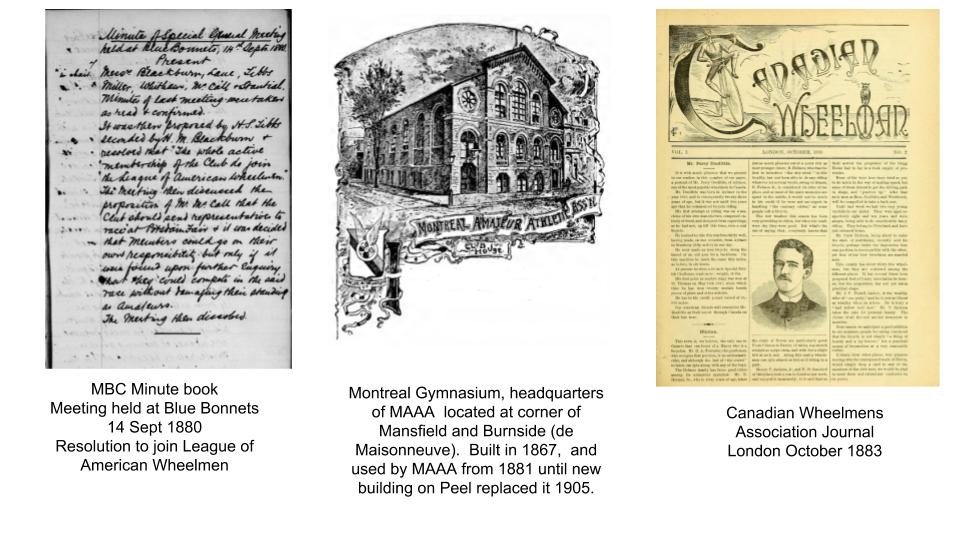 The CWA published a monthly journal and organized annual “Meets” in different cities across Canada. The host city would invite Wheelmen from clubs across the country to come and join them for a series of events held over the Dominion day weekend.  The Montreal Bicycle Club hosted the Meet in 1886, then for a second time in 1894. Every year the MBC would send a delegation to the annual Meet, and arrange specially priced rail transport to the host city.  The Meets had bicycle parades through the host town, a series of track races, road races, musical rides, and demonstration polo matches all on High Wheelers. 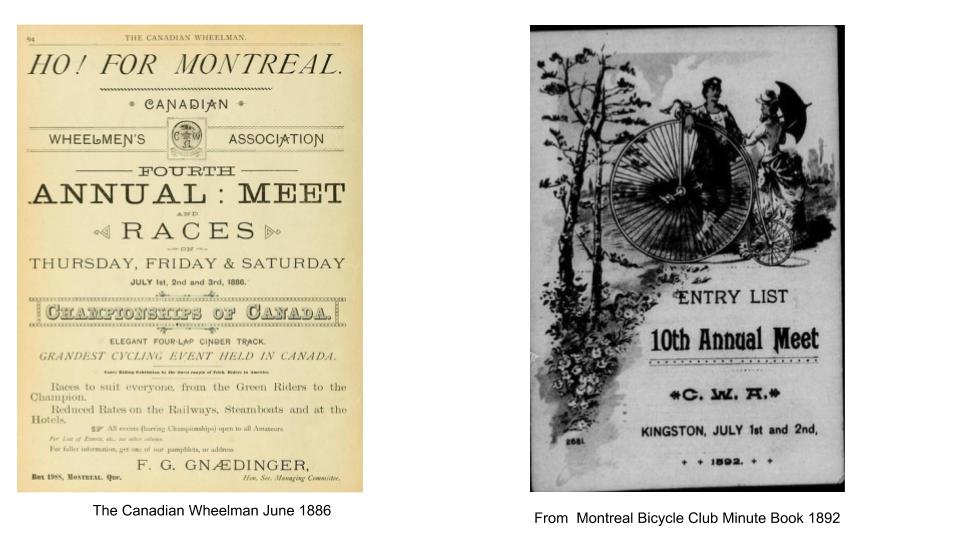 However, because of the High Wheel's danger and difficulty in riding, tricycles or an early form of safety bicycle known as the kangaroo were also used. 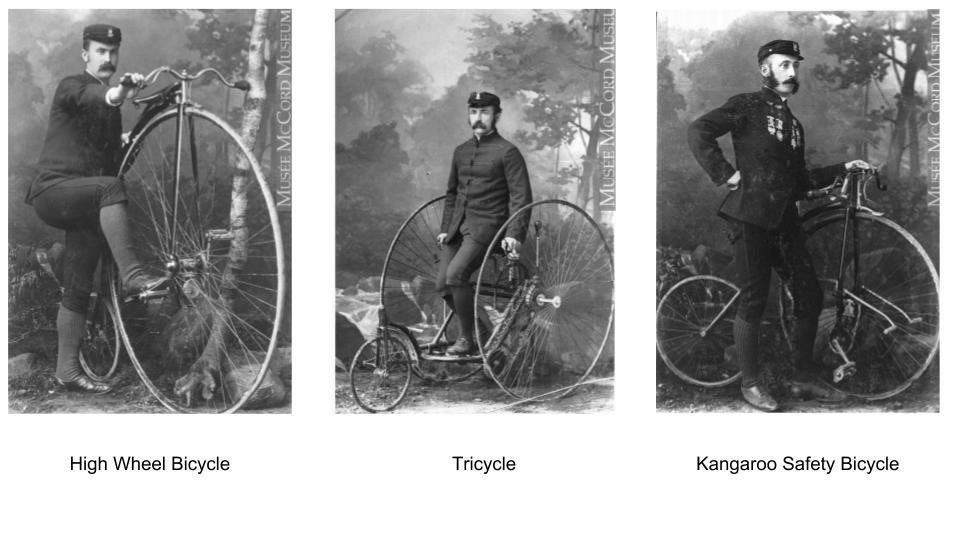 Sometimes the club’s events became etched in family history.  On June 15, 1887 a penny farthing hill climbing competition was held on Cote des Neiges.  Some of the best riders from the Montreal Bicycle Club attended, yet all were defeated by the hill, except one plucky, small, 10 year old, boy, Bertie Lane.  It was reported in the newspaper at the time .

“Just below the crest of the hill, his little legs seemed to stop momentarily, and ere the conveyance might topple over, suddenly he was at it again and had accomplished the ascent in 10 minutes, 20 seconds”.

Sadly he died at a young age, succumbing to influenza when he was  15. His obituary noted the hill climbing competition and credits him as the first person to cycle up Cote des Neiges hill, up which thousands labor, even to this day. 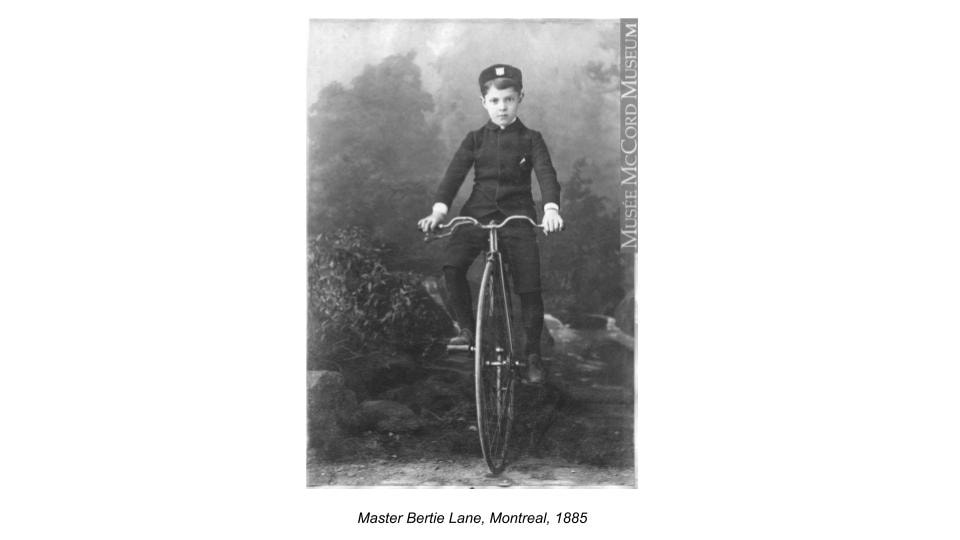 In 1888, the 10th anniversary of the club’s existence, a magnificent silver cup for road racing was donated by Messrs Theo and Fred Gnaedinger.  It now is housed in a glass case in the MAA lobby. Cup road races were held between downtown Montreal and Lachine or Pointe Claire. 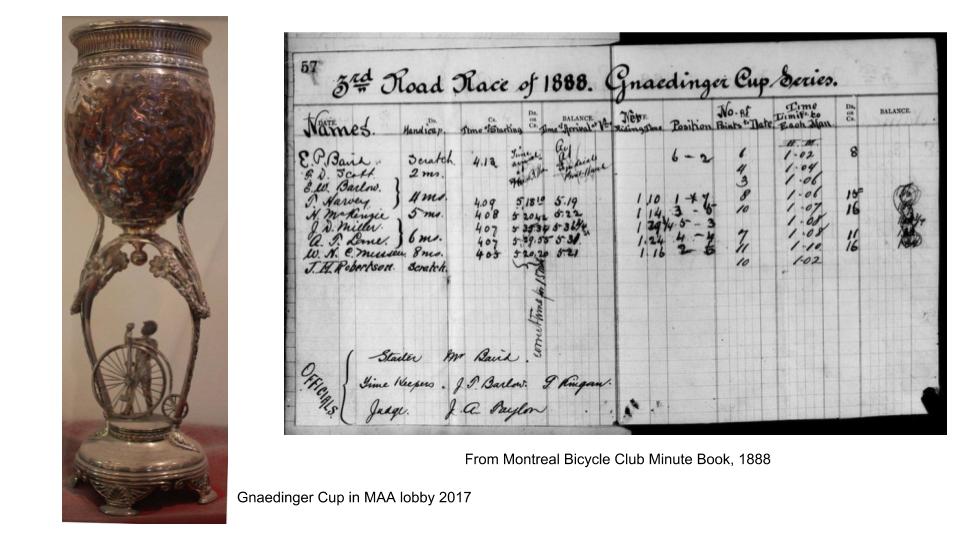 During this high wheel era, epic travels such as Thomas Steven's round the world trip from 1884-1886 were widely reported. Steven’s trip was financed and promoted by Colonel Pope and Charles Pratt.  Members of the Montreal Bicycle Club were spokespersons for cycling and it was expected that they be aware of Steven’s around the world progress and be ready to discuss it. 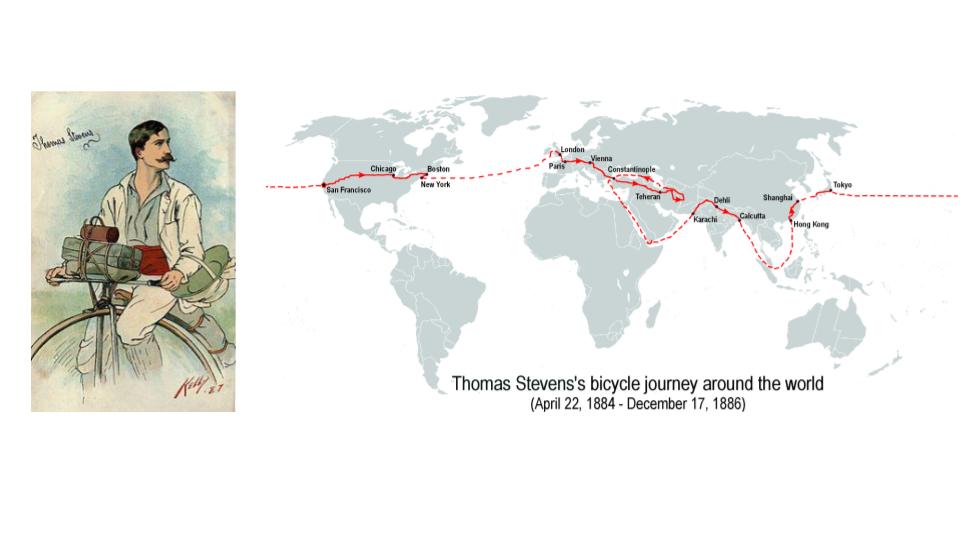 In the same year, 1884, a more modest yet still impressive long distance bicycle trip was recorded by the Canadian Wheelmen’s Association.  A Mr Jenkins from Ottawa passed through Montreal on a high wheel bicycle trip to Matane Quebec.  From Ottawa to Montreal he had a tricycling companion. Then, because the roads were impassable he picked up a ferry from Sorel to Quebec city, and then continued along the shoreline of the St Lawrence as far as Matane. 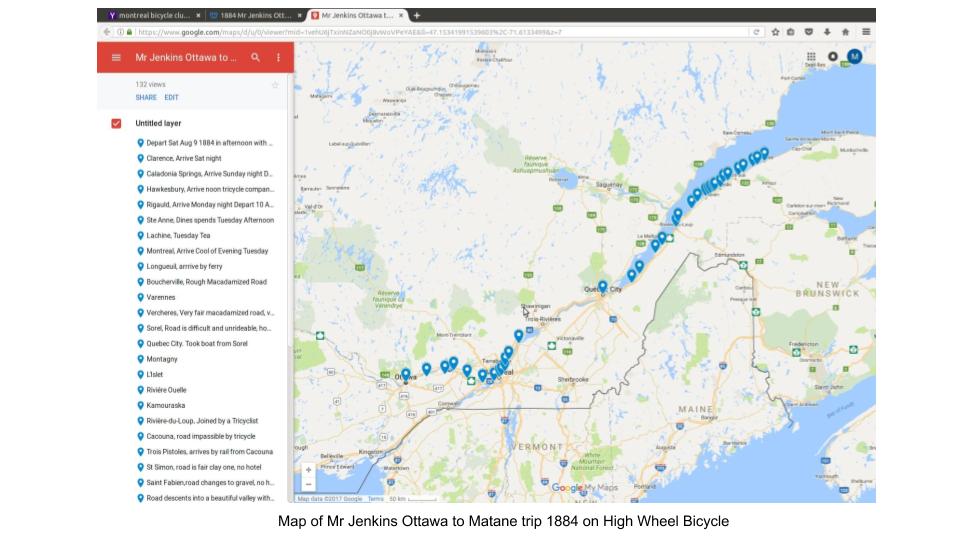 He returned by rail on the Intercolonial Railway. 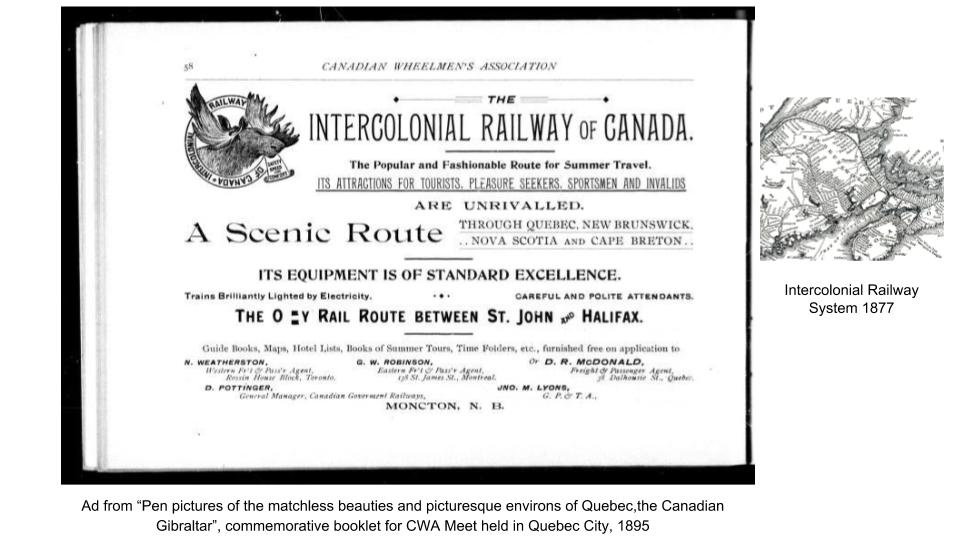 In Summary, during the elite High Wheel bicycle era, the Montreal Bicycle Club was a small yet well known club, by then the oldest in North America. The first two clubs, in Boston and Bangor had been very short lived. The Montreal club wore distinctive uniforms at all public events. As a part of the MAAA, they owned one of the best sporting clubhouses in North America. Track races were held at McGill, the Lacrosse grounds or the Blue Bonnets horse track which at that time was located near the present Montreal West train station.  Handicap races were popular, weaker riders starting ahead so that everyone might finish at the same exciting moment. For most members however, club membership involved getting together and participating in the Fixture rides in and around the Montreal area every few days.  The more serious members would travel to a different city for the CWA Meet each year on Dominion day. 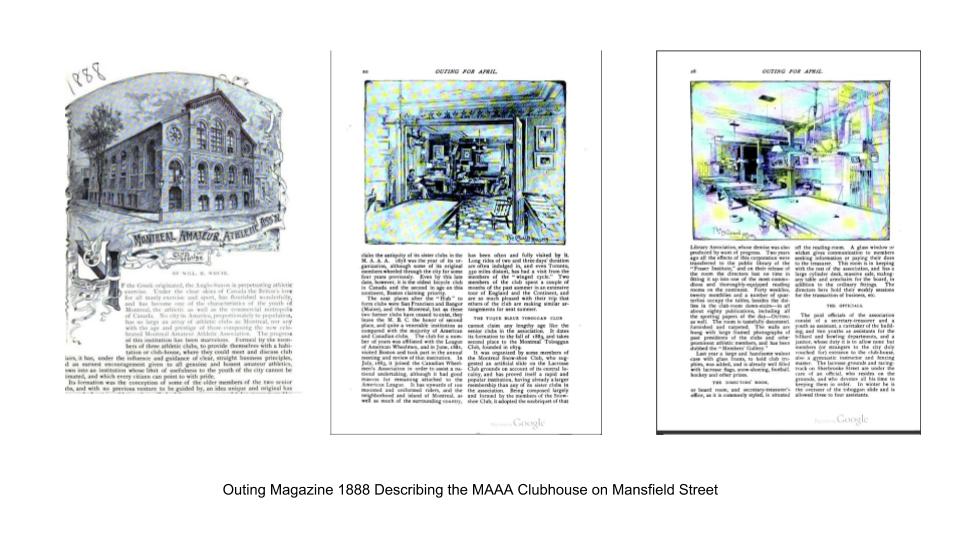