Montreal Cycling History
The Bicycle Craze of the 1890's

Suddenly almost anyone, man or woman, could ride a bicycle and the bicycle craze of the 1890’s was born. (note this tandem bicycle is steered by the man in the rear) 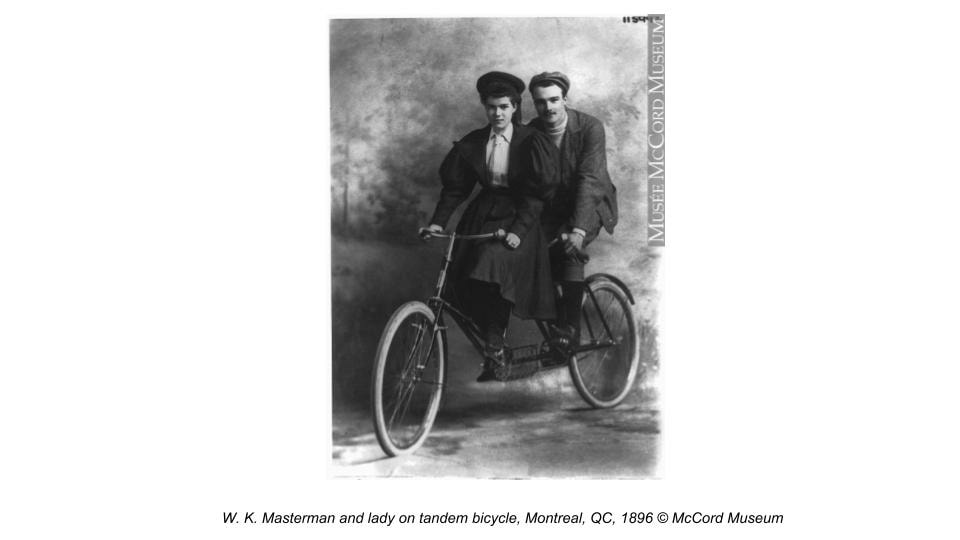 All over the world, interest in cycling exploded.  In Montreal an entire issue of the Montreal Star was devoted to cycling. This was not unique to Montreal, the New York Times also devoted entire issues to cycling. 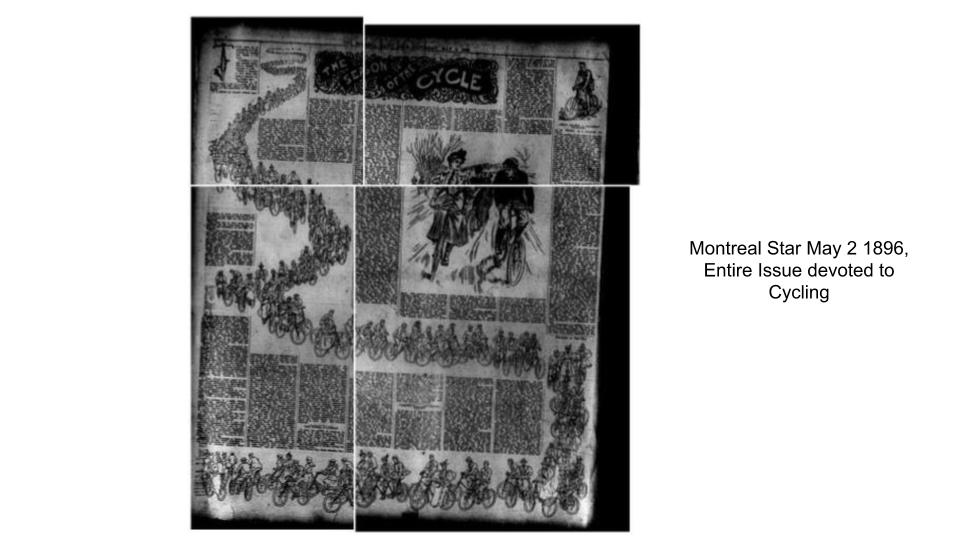 This explosion of interest resulted in additional bicycle clubs in Montreal as stated in this 1896 article about cycling in Montreal which appeared in the American cycling journal Wheel and Cycling, These new clubs did not feel obligated to follow the same traditions outlined in the original Montreal Bicycle Club minute book. For example instead of military style uniforms, a wide variety of different styles were chosen, one very much like a prison uniform of black and white horizontal stripes as illustrated in this cartoon. 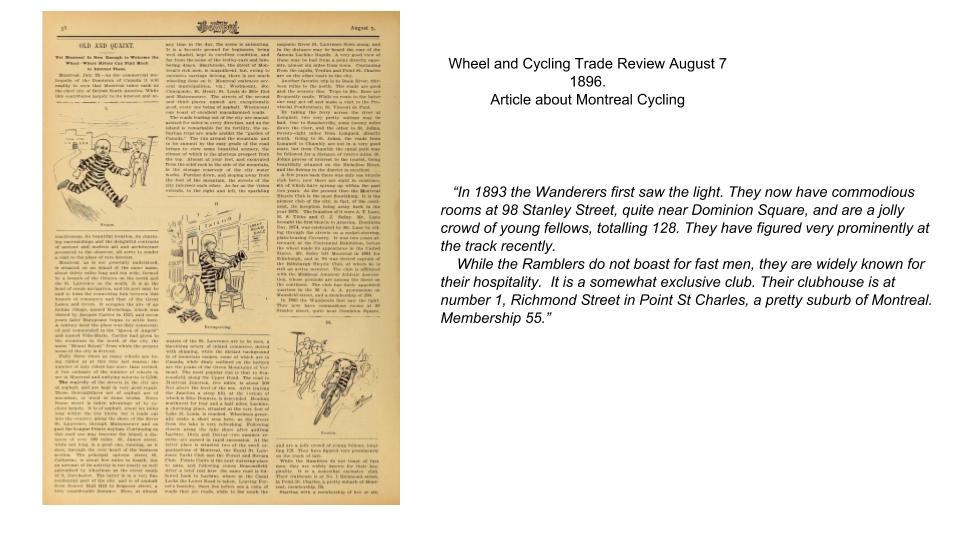 This 1896 article estimates that there were 6500 bicycles in Montreal, as well as 7 new bicycle clubs in addition to the original MBC. The Wanderers located on Stanley street near Dominion Square had much racing success. The Ramblers, who were noted for their hospitality were located on Richmond street in Point St Charles. The YMCA on Dominion Square had an associated club, as did the Victoria Rifles regiment. St Mary’s at 35 members was the smallest club mentioned in this article. The City club  was notable in that it permitted women to have full membership. Finally this article states that the Voltigeurs was the only primarily francophone cycling club in Montreal. Their clubhouse was located in old Montreal at the corner of Notre Dame & St Francois Xavier.

Cycling interests sometimes combined to form a political force. When a $5 tax was to be  imposed on bicycles, the various club members succeeded in having it reduced to $2. This tax could be avoided further by getting a bicycle license in Westmount rather than Montreal. In this city it cost only 50 cents. 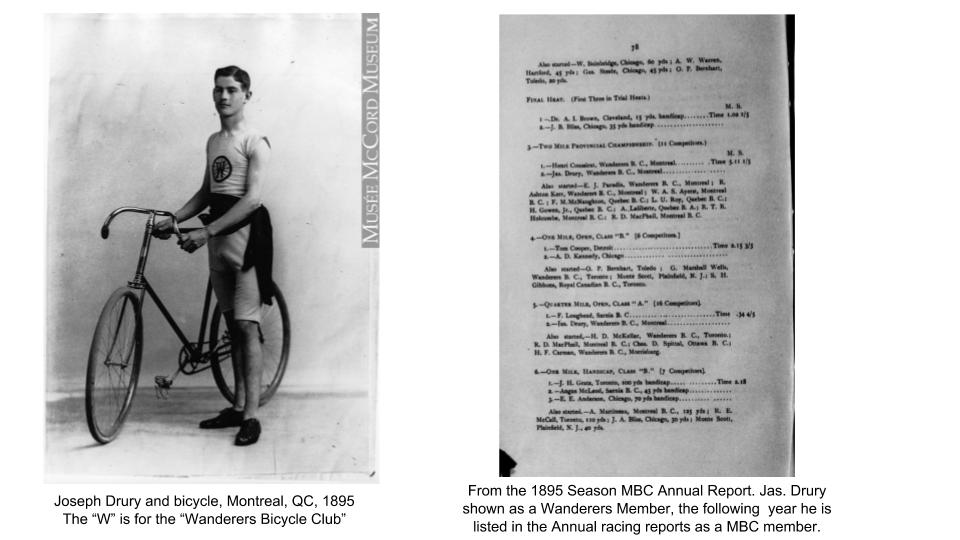 By the mid 1890’s the League of American Wheelmen had one hundred thousand members, there were approximately one thousand of bicycle clubs throughout this continent. American racing champions such as Arthur Zimmerman were household names.  Today Zimmerman is best remembered for the controversy he created when he competed in England as an Amateur despite the fact he had received valuable non cash prizes for different competitions. 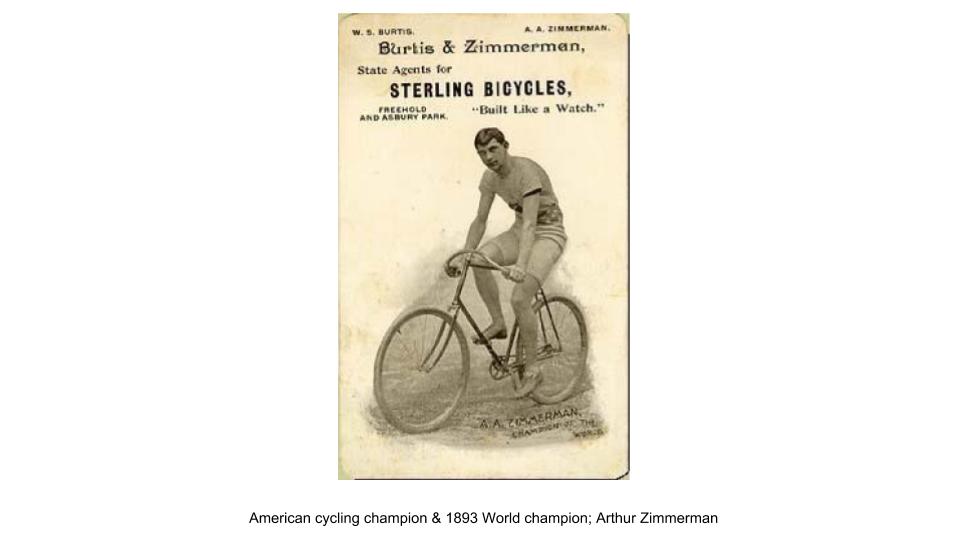 Professionals competed in endurance six day races held in many cities across North America. The most prominent 6 day race, at Madison Square Gardens attracted huge crowds and this race was the premier sporting event in America.  In the 1890’s top professional cycling racers could earn 10 times that of any other sport. 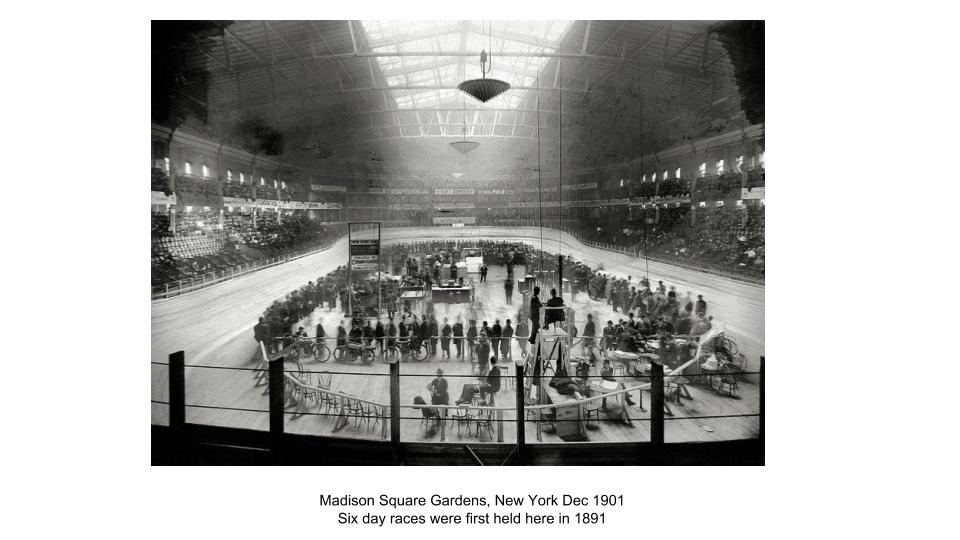 However, because indoor professional cycle racing did not survive beyond the 1930’s in North America, there is little memory of that era’s racing today in this continent’s popular imagination.  At the start of the Safety Bicycle era, to be considered as the best cyclist in the world one had to be either the national champion of the UK, or to have won the Madison Square Garden Six day race or be the holder of a world record one mile time. 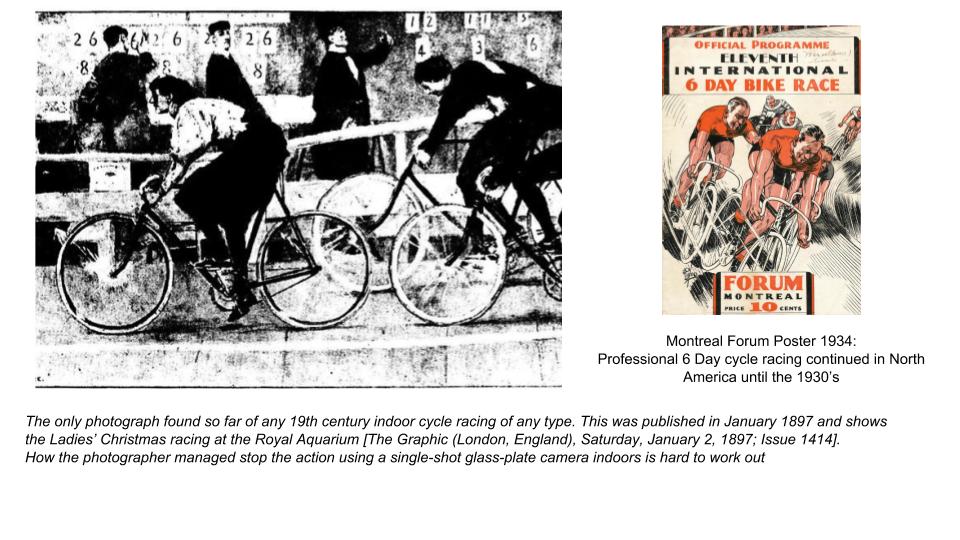 Bicycle racing events at the MAAA grounds were also widely attended, note the 1893 newspaper sketch in the  Montreal Star. 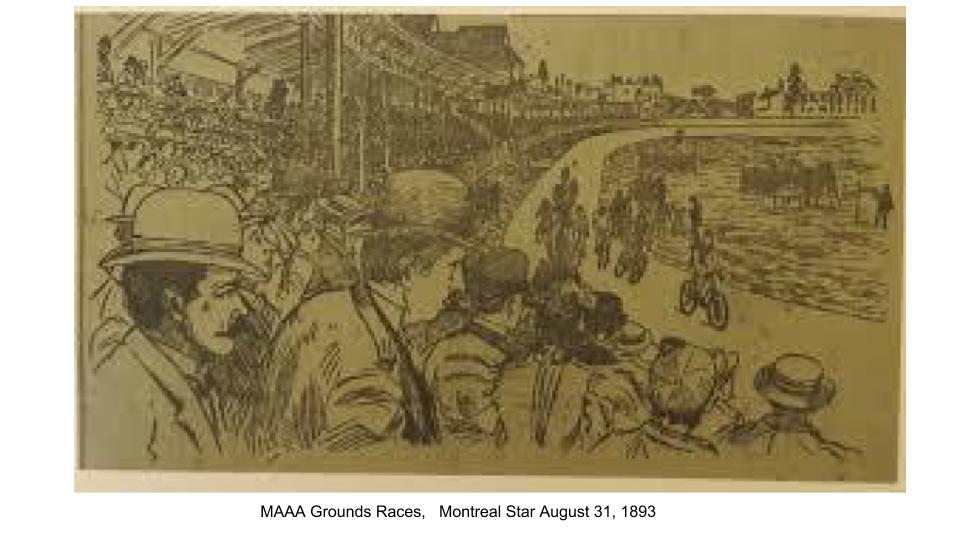 Pictures of the crowds can also be seen in details from the 1897 Notman composite photograph of the Montreal Bicycle Club members.  Although a slightly banked cinder track was considered ideal for cycle racing in 1890, due to the intense competition for record times this type of track quickly became obsolete for establishing new records.   Soon the racing members of the Montreal Bicycle Club longed for a the highly banked, wood velodromes that had the best performance times. 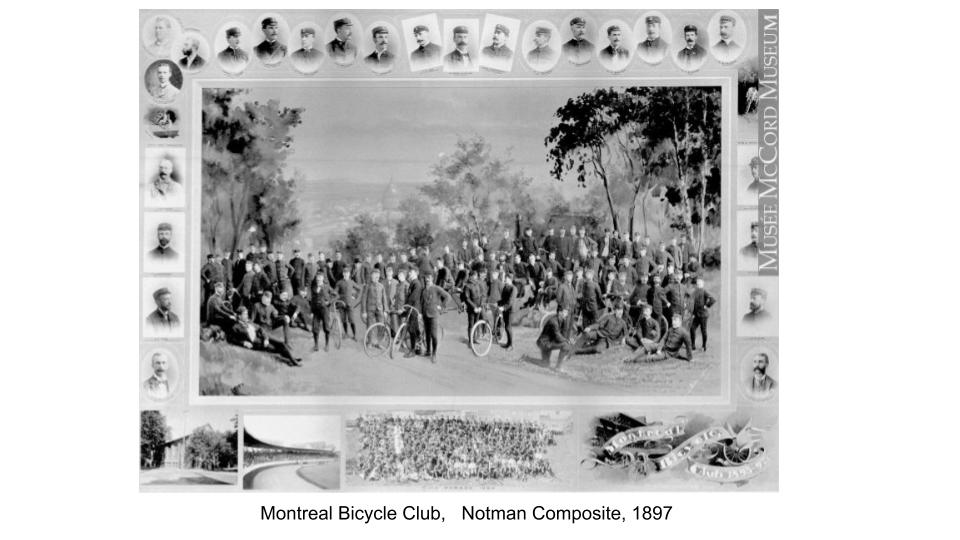 In 1892 in order to promote the sport, Henry Sturmey of the UK founded the International Cycling Association (ICA). It’s role was to hold an annual cycling world championship and enforce a common definition of Amateurism  which each country defined differently. The first world championship was held in 1893 in Chicago to coincide with the World's Fair. 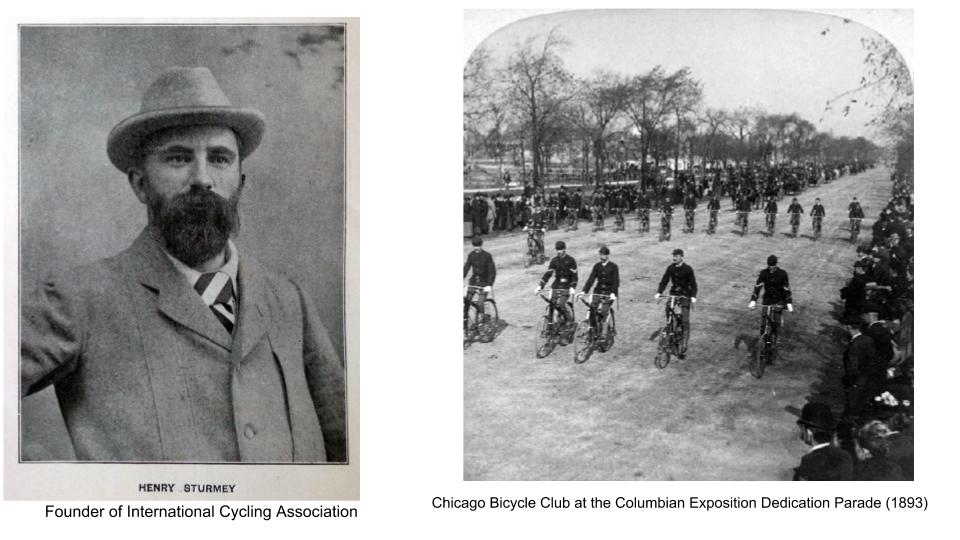 Only amateurs were permitted to compete and Arthur Zimmerman won this championship and then joined the professional ranks. 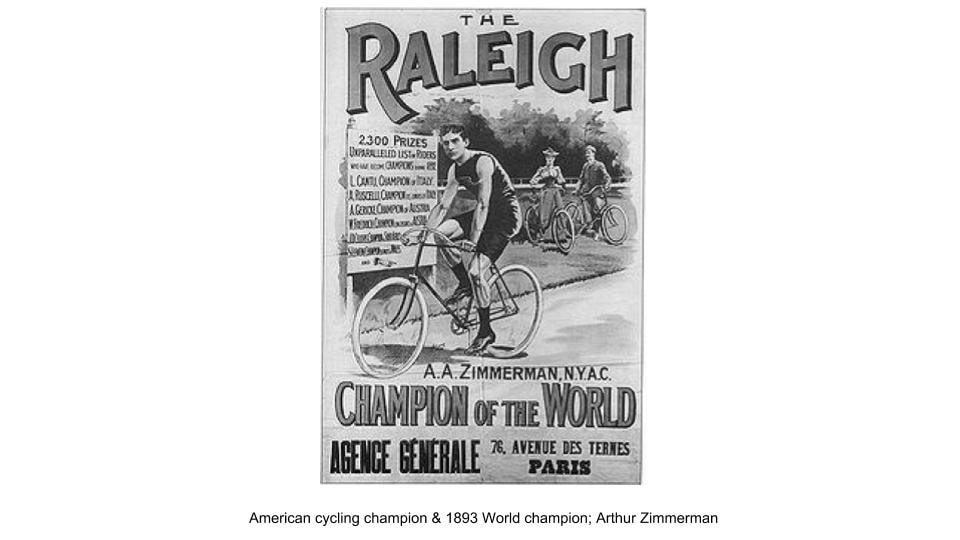 In Chicago there also occurred a chance meeting between ZImmerman, and a young Black trick rider, Major Taylor.  Shortly after that meeting, Taylor, a 14 year old boy almost equaled the one mile world record time at a local race.  Birdie Munger. a professional cycle racer, who also built some of the best racing cycles, took Taylor under his wing and the two became lifelong friends and business partners. 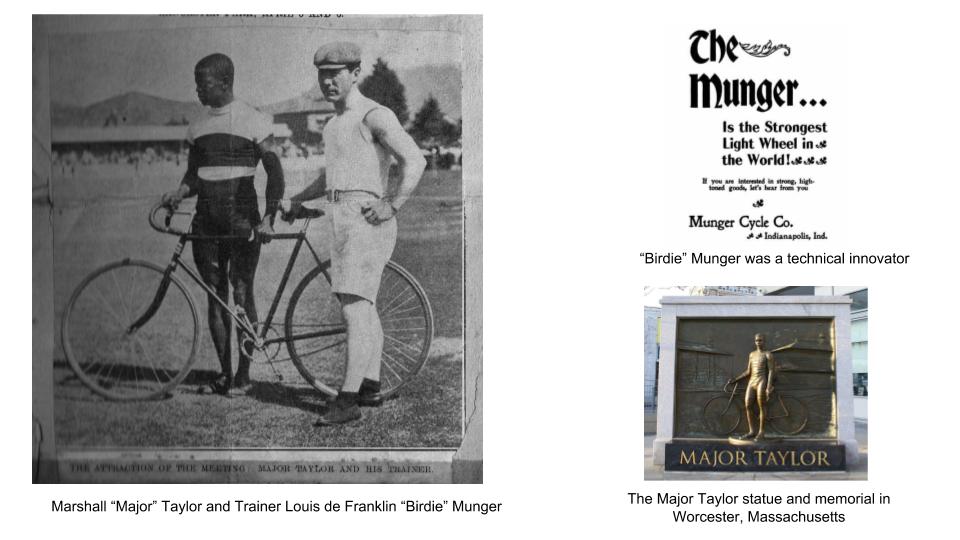 However, this was also a time of racial segregation in the United States. In 1894  a group of Southerners managed to get the League of American Wheelmen to ban black cyclists from becoming members. 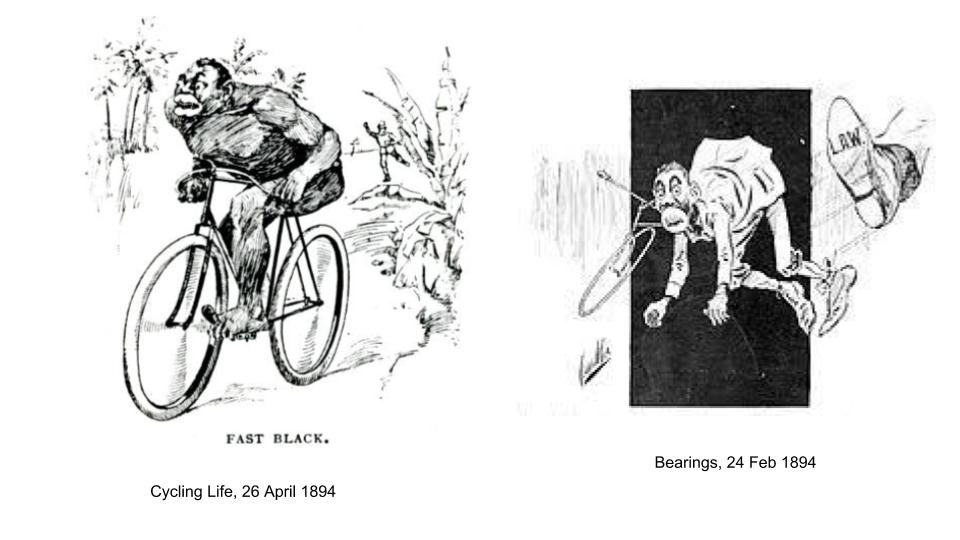 That same year, 1894, A.T. Lane became president of the Canadian Wheelmens Association. The CWA  at that time had 2000 members and the vote for president was tightly contested. A.T. Lane received 764 votes to Dr Dolittle of Toronto with 753.  Montreal won the bid to host the CWA annual meet and in order to promote the event A.T. Lane organised a Sarnia to Montreal relay ride. 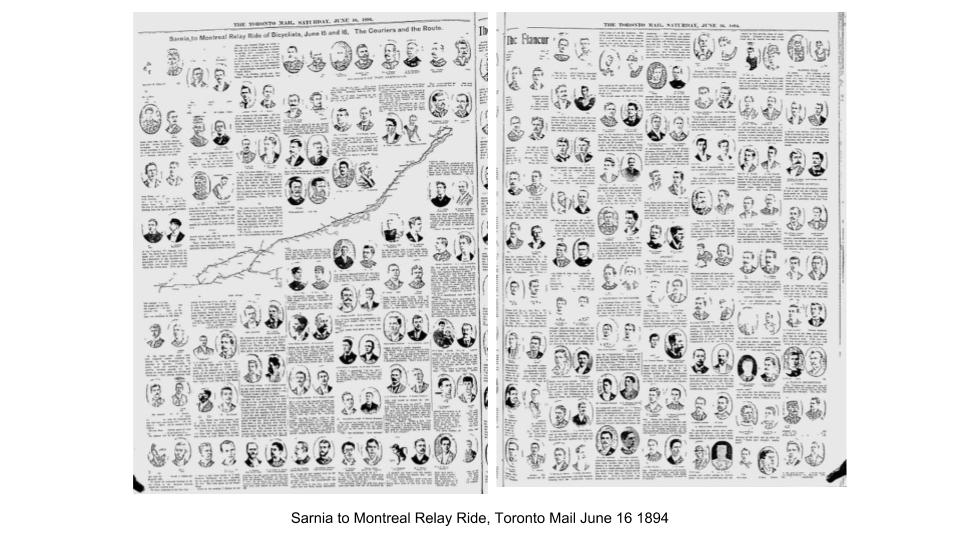 The relay riders carried a letter, passed from one rider to next, requesting better roads. This was signed by 11 mayors along the route.  The ride was accomplished in 33 hours. 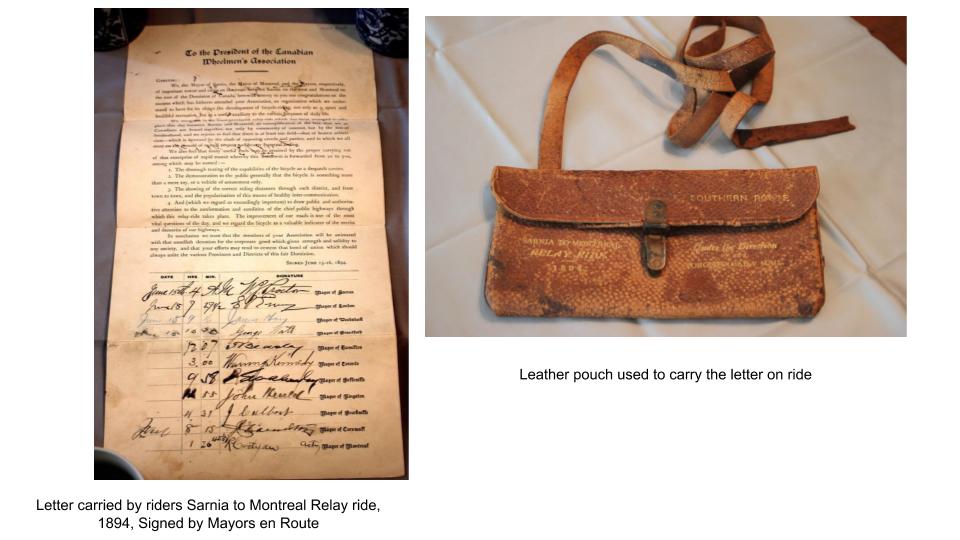 The 1894 CWA annual meet, was hosted by the Montreal Bicycle club at the MAAA grounds in Westmount. For the event, a commemorative booklet entitled “Our City, Our Sports” was published.  It gives a history of Montreal, a summary of all the sports of that era, a poem praising Montreal written by a future mayor of Westmount W.D. Lighthall, a custom printed detailed map of the city as well as many pages of vintage bicycle and travel related advertisements.  A.T. Lane kept the newspaper clippings of his son Bertie’s obituary in his own personal copy of the booklet. 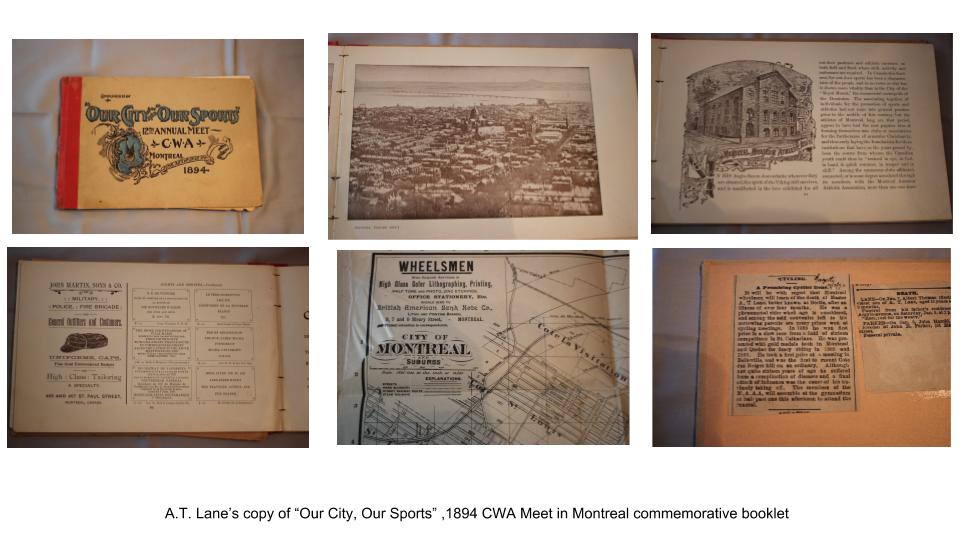 At the annual meet, nearly 1000 Wheelmen showed up Sunday morning at the MAAA clubhouse, the Montreal Gymnasium, and marched to St James Church to attend a sermon.  That afternoon there was a ride to Lachine, for a dip in the St Lawrence. Monday morning there was a trip down the rapids, in which 500 Wheelmen participated, followed by a parade. 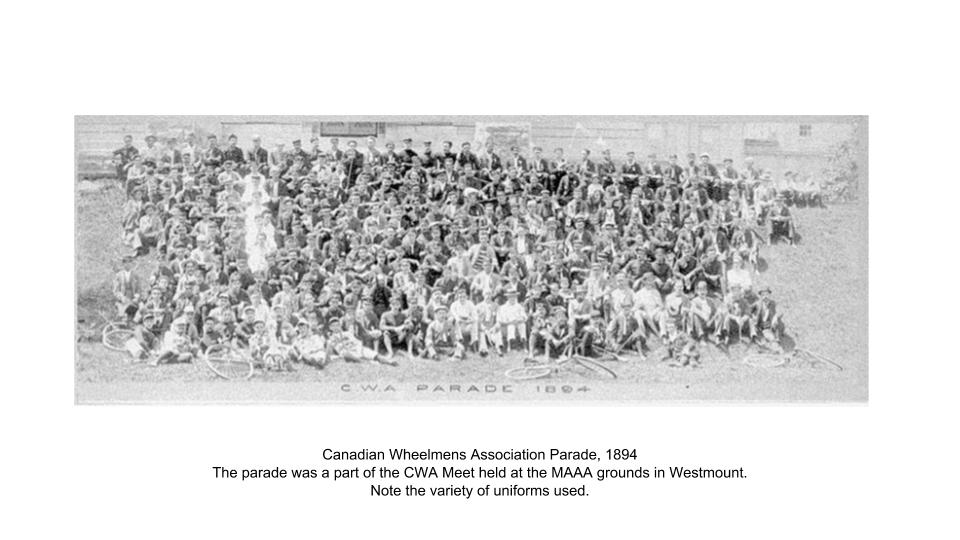 Over the next few days, a series of races was held at the MAAA grounds.  The CWA Meet finished with a presentation of prizes, accompanied by music played  Victoria Rifles, along with a demonstration bicycle polo match, all of which were held at the Victoria Skating Rink. 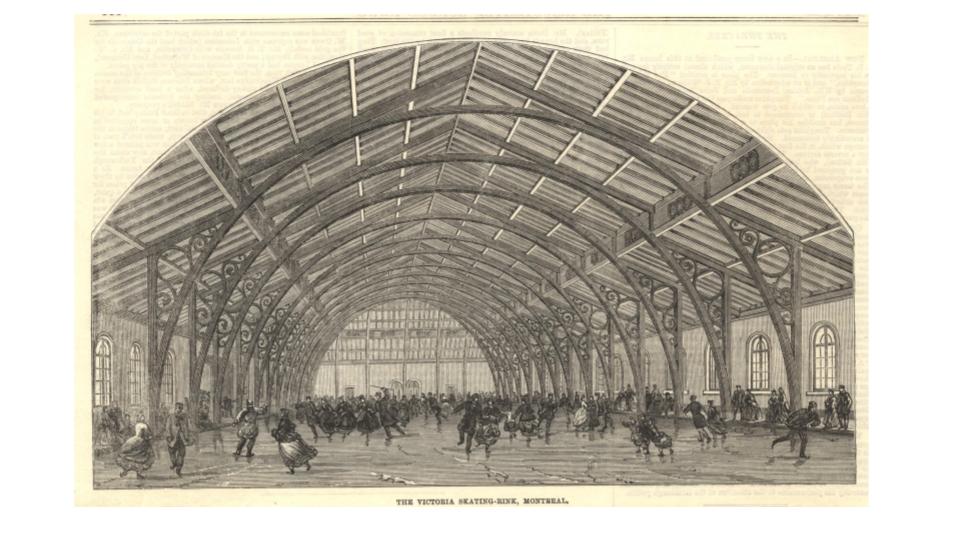