Present : A.T. Lane,   Minutes by A.T. Lane
Length of ride 12  km
Route
A.T. Lane did a ride through downtown Toronto to Union Station on the way home to Montreal.  He made notes of what the bike paths in the city were like.  The designers of Avenue have given no thought to cyclists, Davenport road has a painted line bike path that looks pretty good.
Bloor street east of University / Avenue road does have some painted line paths or bike chevrons. This is better than Sherbrooke street in Montreal.
Bloor street west of University / Avenue road has a protected bike path.  There are a few bus stops that are shared with the bike lane.
The Bloor street path ends at Shaw street. Shaw is a one way street with a bike path in the opposing direction.
College street is interesting in that it has both a trolley and a bike path.  In the narrow portions the non-rail lane has bicycle chevrons.  Cars tend to drive on the rail lane leaving the bike chevron portion to cyclists.  When a trolley appears, the cars and bikes share the lane.
In the wider portions of the street, there is a lane for each type of transport.  Given that electric, steel on steel transport is so efficient streets like this may become common in the future.
Most streets in Toronto that have trolleys do not have bicycle paths, forcing people to ride on sidewalks.
Toronto's Union station, which has undergone renovations recently, now has an elevated street with bicycle chevrons by the entrance.  Some improvements to encourage sustainable transport are being made.

However, Via rail has only one daily  train that has a baggage car to transport bicycles going from Montreal to Toronto.  For some reason, going from Toronto to Montreal the service is even worse, it is only available only on Weds, Fri, Sat and Sunday!  This is hardly the actions of a national rail system facing a climate change crisis!!!
5 September Angus Yards

Present : A.T. Lane & H.S. Tibbs  Minutes by A.T. Lane
Length of ride 30 km
Photos
Route (partial)
A.T. & H.S. met at the Shaika Cafe. We dicided to go north of the mountain to the Angus Yards and return on the south side of the  mountain.
On the north side we saw various improved painted paths, a  new roundabout being built, and looked into how the bicycle path that runs beside the rail line could be extended westwards. 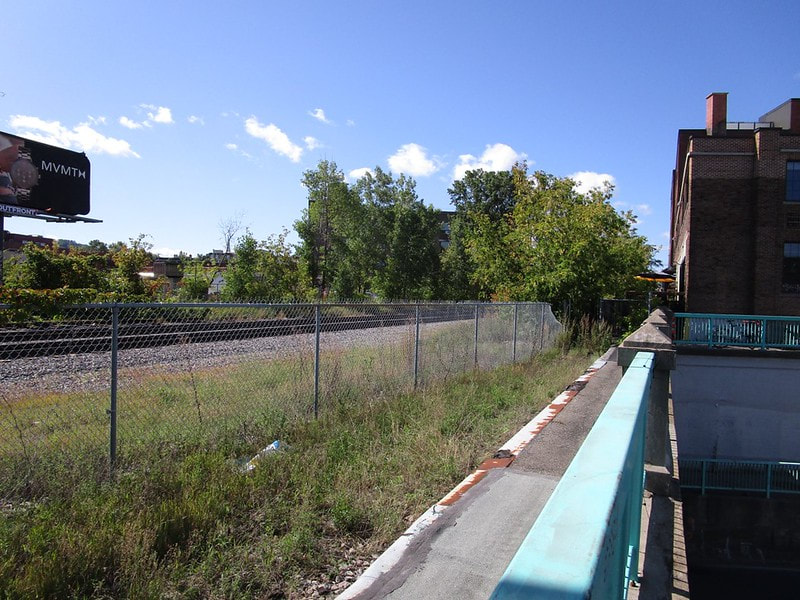 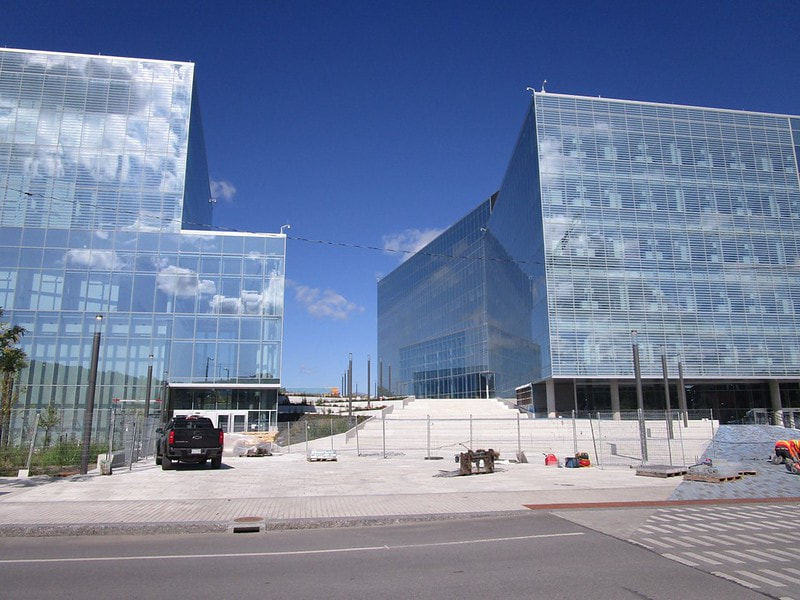 Bike path that could be extended westwards to new UQAM campus.
8 September Kahnawake

Present : A.T. Lane, W.G. Ross, Alice Hawkins, G.T. Bishop, Dorothy Cole, & Maria E. Ward Minutes by A.T. Lane
Length of ride 69 km
Photos
After taking the ferry to î le St Bernard, the members biked into Kahnawake.
Taking care to note as they always do, the state of the bicycle paths and any aspects of local history they find interesting.
East of the Mercier Bridge, they traveled on a gravel road beside the Seaway, eventually leading to port storage area.
Entering Ste Catherine, they admired a recently renovated park and its useful facilities.
Continuing eastward along the South Shore, Dorothy again met members of her fan club.
Crossing the Seaway at the St Lambert Locks, they made their way back to Montreal.
10 September  Making the Falaise our Own

Present : A.T. Lane, H.S. Tibbs, Alice Hawkins, Louis Rubenstein, Amelia Bloomer, & Mrs McCormick Minutes by A.T. Lane
Length of ride n/a
Photos
Taking a tour of the Falaise,  the members quickly came upon the nearly renovated living room suite.
Continuing on in the forest they made their way to the Bande Verte.
After a full day of playing Woodsmen rather than Wheelmen ( or women), they relaxed on the Living Room Sofa.
15 September Grand Prix de Cyclistes Montreal 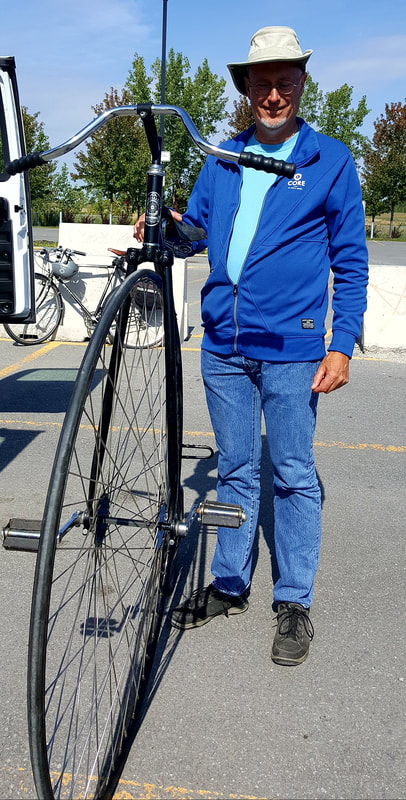 The two members stopped by TAZ to pick up the Penny Farthing Bicycle.  After one close look they decided it was too foolhardy to try riding it.
20 September PARK(ing) Day in Westmount 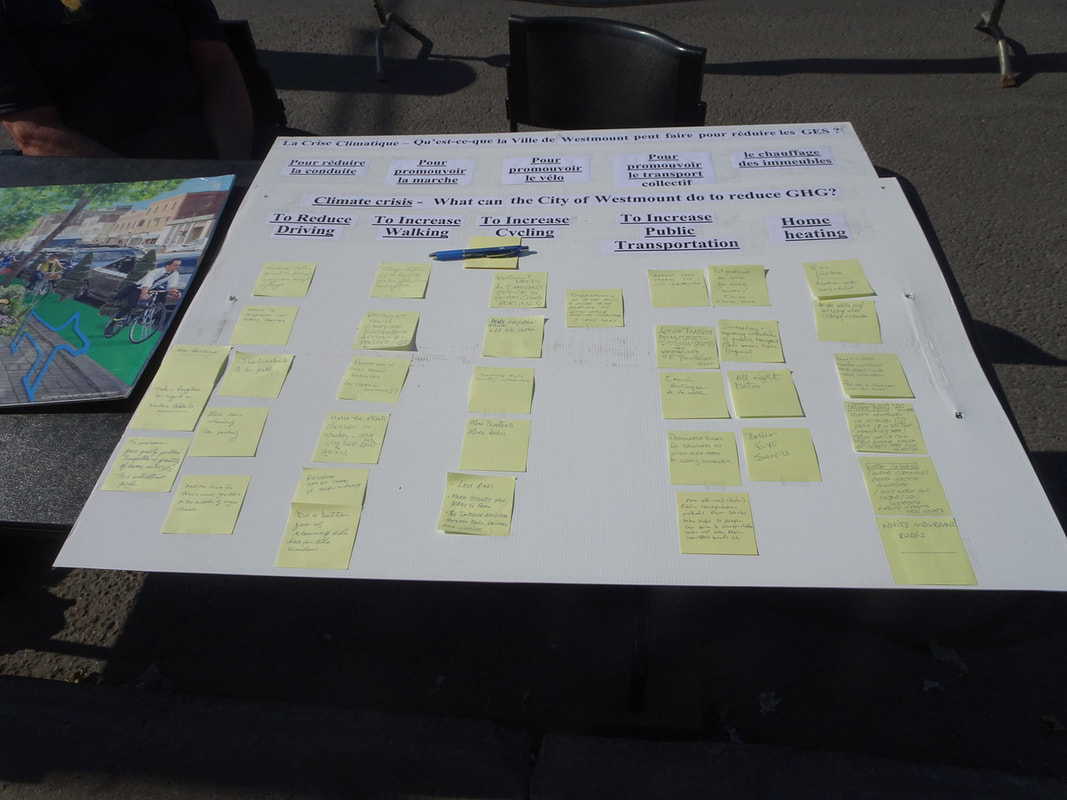 PARK(ing) Day in Westmount was at the corner of Sherbrooke and Prince Albert.  Passersby were asked what they thought the city of Westmount could do to reduce GHG's.  Post-it notes of their ideas were put on a board.
27 September Greta in Montreal

Present : A.T. Lane & H.S. Tibbs  Minutes by A.T. Lane
Photos
The members met at the Shaika Cafe to discuss plans, then headed out along Sherbrooke Street to join the march.  Along the way they spoke to some like minded persons and stopped for a few selfies.
While waiting for the march to start, they took the time to check out the crowd scene as well as some more notable signs.  Greta D'Arc !!
Of course since we are in the midst of an election, some of of the pictures are political.
But most of the pictures remained with Greta and her ideas of what could be done.
On the way home, the downtown was closed to traffic, which was a dream come true.  Thank you Greta!!!
28 September Falaise Pass By

Present : A.T. Lane, Louis Rubenstein & Karl Kron  Minutes by A.T. Lane
Distance cycled 10 km
Photos
Route
After meeting at the Shakia for a ride out to the ferry to Pointe Aux Trembles, them members took a look at the rain and decided in favour of a shorter run.  They checked out if the garbage from the Falaise clean had been removed, (yes, it had) and stopped at the 2nd Cup for more discussion.

The September 28 report closes the September Fixtures on a sensai level the younger generation of cyclists should aspire to attain.  Namely, when one has attained a certain level of maturity after decades of pedaling a certain total number of vélo-kilometers in all weather conditions and one's personhood is firmly established, one may on occasion detour from the posted route to the nearest coffee shop to sit out the rain.  Woe to the young grasshopper who smirks.