3 October Fixture Ride  Along the River

Present :  H.S. Tibbs,  Louis Rubenstein, G.T. Bishop, Henry Strumey, Daisy Greville & A.T. Lane Minutes by A.T. Lane
Length of ride: 54 km
Map of ride
Photgraphs
The members chatted for a while at the Shaika Cafe before heading out to Lachine.  G.T. Bishop recounted his recent trip to such bicycle paradise's as the Netherlands while Tibby warned us of heavy fines given recently for disobeying the "use the walk NOT the green light" sign at Claremont Ave our city uses rather than a separate bike light.  G.T. mentioned that in the Netherlands all the traffic light intersections that have  bike paths also have separate car, pedestrian and bicycle lights so there is no ambiguity as to when to cross.

After passing under the tunnel at the bottom of Devil's hill, we had a surprise encounter with Henry Sturmey who joined us for the ride out to Lachine. 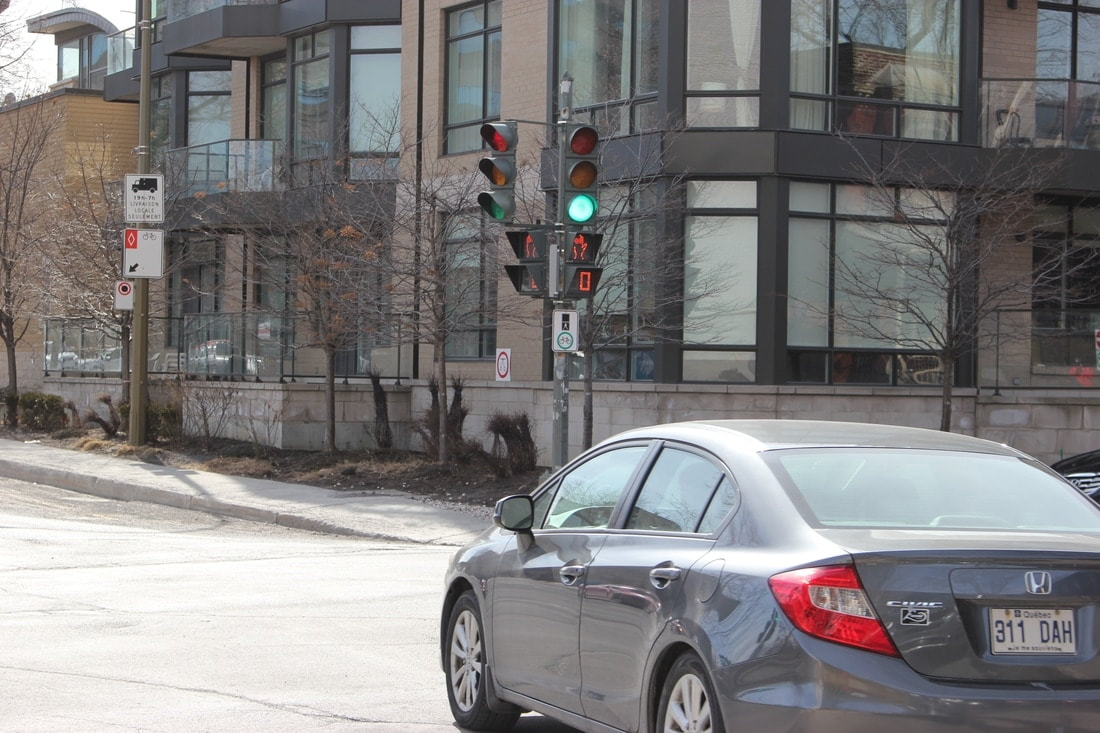 $127 dollar ticket if you bicycle through this green light at Claremont Ave.  Note the "use the walk NOT the green light sign". 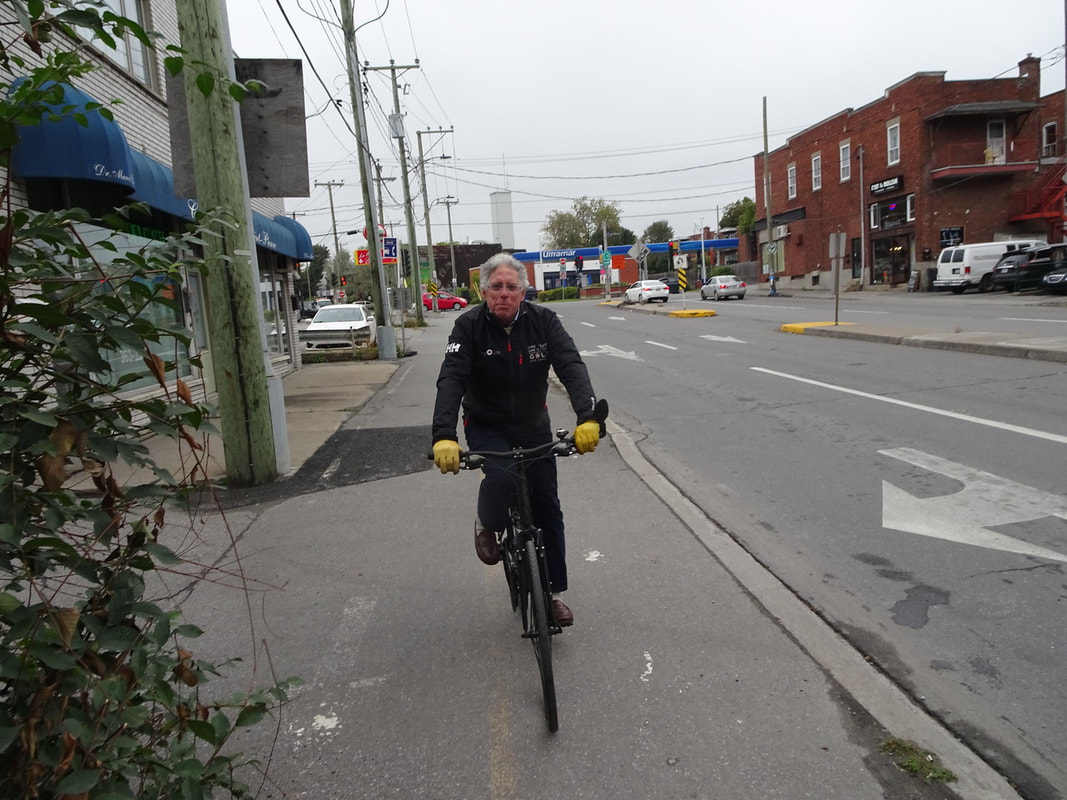 We continued on along the Lachine Rapids, passing late season surfers, viewing the progress of the new Champlain bridge, and finally returning to Montreal.
10 October Fixture Ride  around Miron Quarry

Present :   Louis Rubenstein, G.T. Bishop, & A.T. Lane Minutes by A.T. Lane
Length of ride: 45 km
Map of ride
Photgraphs
The members met at the Shakia Cafe and discussed the recent NDG city council meeting as well as what are the various local cycling rules as they waited for the rain to pass before commencing their ride.
We started questioning everything along the route. Do plantings obstruct the ability of drivers to see cyclists?  Why not have bike lights at all bicycle path intersections with traffic lights?
Even really big questions, such as our place in the universe. 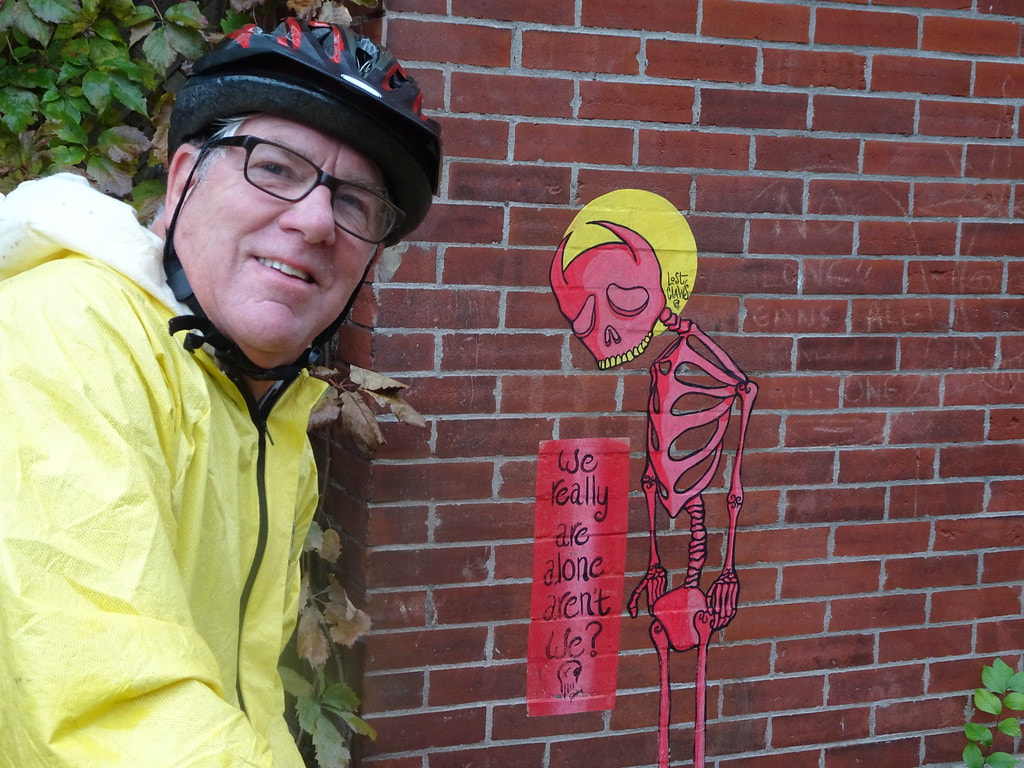 Then came our stops, a visit to TAZ, the Indoor Soccer Stadium, and the circus museum at TOHU.
25 October End of Season Fixture ride to Angus Yards

Present :  H.S. Tibbs,  Louis Rubenstein, G.T. Bishop, W.G. Ross, Karl Kron, Daisy Greville & A.T. Lane Minutes by A.T. Lane
Length of ride: 26 km
Map of ride (return only)
Photgraphs
Meeting again at the Shaika Cafe the members headed out along the Lachine Canal to the old Port.  The weather  was just above 0 deg C and some bowed out along the route.  After warming up at the Angus yards, the remaining members returned via different routes home, Tibby took advantage of the fall colours to take some photos of Mont Royal.