Present :   A.T. Lane, W.G. Ross,  H.S. Tibbs, Karl Kron,  Louis Rubenstein & G.T. Bishop Minutes by A.T.  Lane
Length of ride: 30 km
Photographs
Map of ride
After showing some support for the protest of Bill 21, the members again gathered at the Shaika Cafe and discussed the non - trip to Washington.
H.S. Tibbs reviewed the construction by-pass between Dawson College and Alexis Nihon, while Louis and W.G. inspected the new path along Avenue du Parc-La Fontaine.
New paths and construction vehicles seemed to be everywhere.
Completing the non - Pick Up, followed by lunch nearby.
On the way back the members looked for signs of Spring and alternative places for lunch.
4 April Twin Peaks
Present :   A.T. Lane, Minutes by A.T.  Lane
Length of ride: 16 km
Map of ride

First ride of this type of the season.  The weather was sunny, yet still very cold and windy.  A fair bit of ice and snow on the Olmsted road remains in the lower portion of Mont Royal.
6 April New Champlain Bridge

Present :   A.T. Lane, H.S. Tibbs, &  Karl Kron  Minutes by A.T.  Lane
Length of ride: 32 km
Photographs
Map of ride
The members met as usual at the Shaika Cafe, on the way to view the new Champlain Bridge, they noticed that one cannot cross the Lachine canal near Atwater market, or the northern path on Nun's Island, fortunately it is still possible to get on to the Ice Bridge.
After crossing the Ice Bridge they stopped and took some photos of the construction of new Champlain Bridge nearby.
Returning on the path to Old Montreal, they encountered more bridges, more ice, horses and finally lunch.
10 April Mostly Coffee and Snow 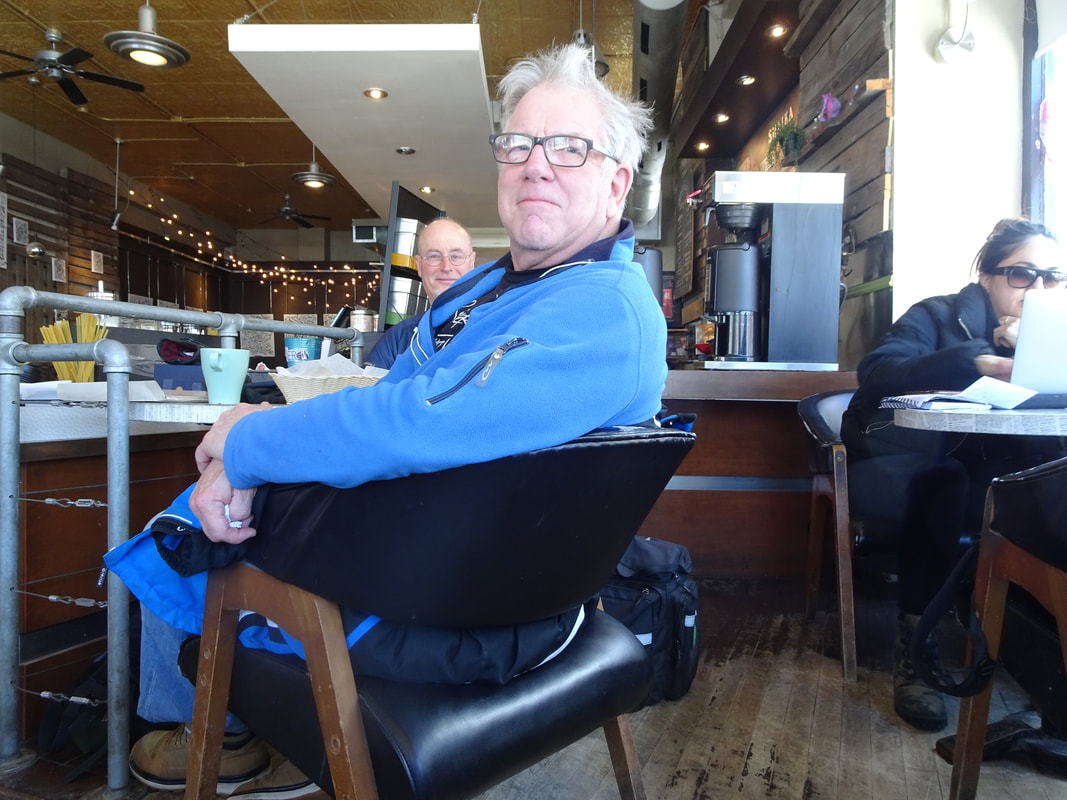 The ride to PSI cycle was postponed due to the snowstorm knocking out power in Laval. Mostly we drank coffee.
13 April Ride along the Lachine rapids

Present :   A.T. Lane, H.S. Tibbs, Daisy Greville, Dorothy Cole, Larry &  Karl Kron  Minutes by A.T.  Lane
Length of ride: 39 km
Photographs
Map of ride
Meeting at the Shaika Cafe, the members set out for Lachine, still a bit of ice along the way.
Stopping at some scenic vistas along the river, observing the results of traffic mayhem, struggling with muddy conditions, and admiring some murals they eventually had lunch on Wellington Street.
17 April Psi Bike

After meeting at Shaika the group had much discussion of the best way to get to Psi, and had a flat tire on the way.
Great lunch and demo!  Thanks to all!!!!
18 April Westmount Historical Association Presentation on the Montreal Bicycle Club

The members met at the Shaika Cafe then rode out to Pointe Claire and had lunch.
25 April Angus Yards

After much caffeine induced conversation, and admiring of the repaired bicycle seat, the members headed toward the Angus yards.
After fixing a flat along the way, and overshooting the Yards by passing by the Olympic Stadium, they took in the sights and had lunch. 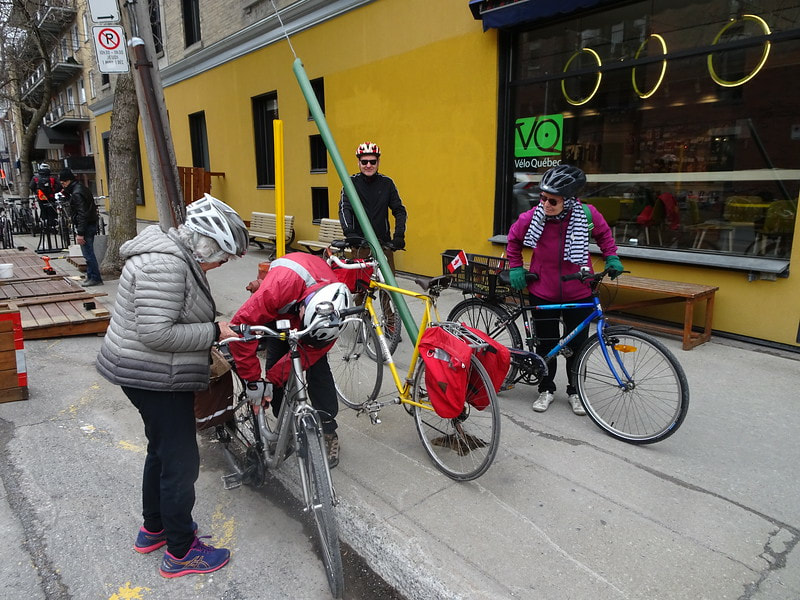 On the return, they photographed some memorable murals, as well as notable bicycles and picked up some BIXI maps.