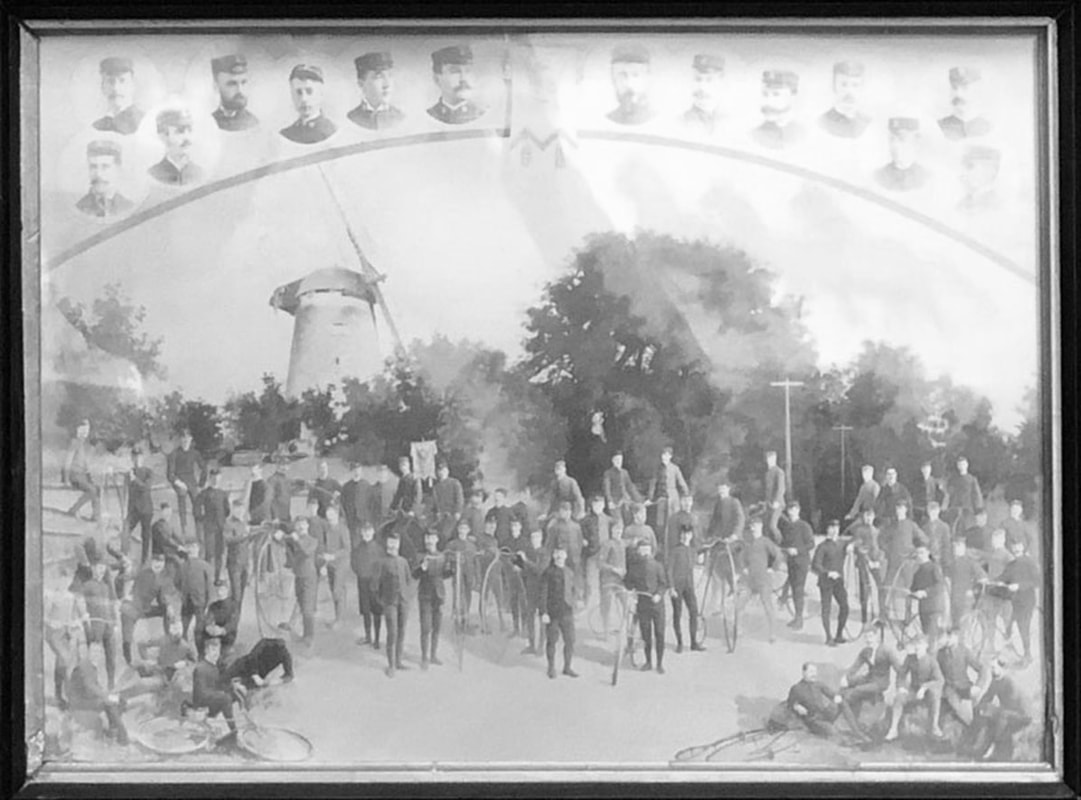 1892 Montreal Bicycle Club Notman Composite Photograh
This 1892  Notman photograph came to our attention via an email sent to us in April 2020 from a rare book dealer in Pennsylvania.  It set off a flurry of study by the club. 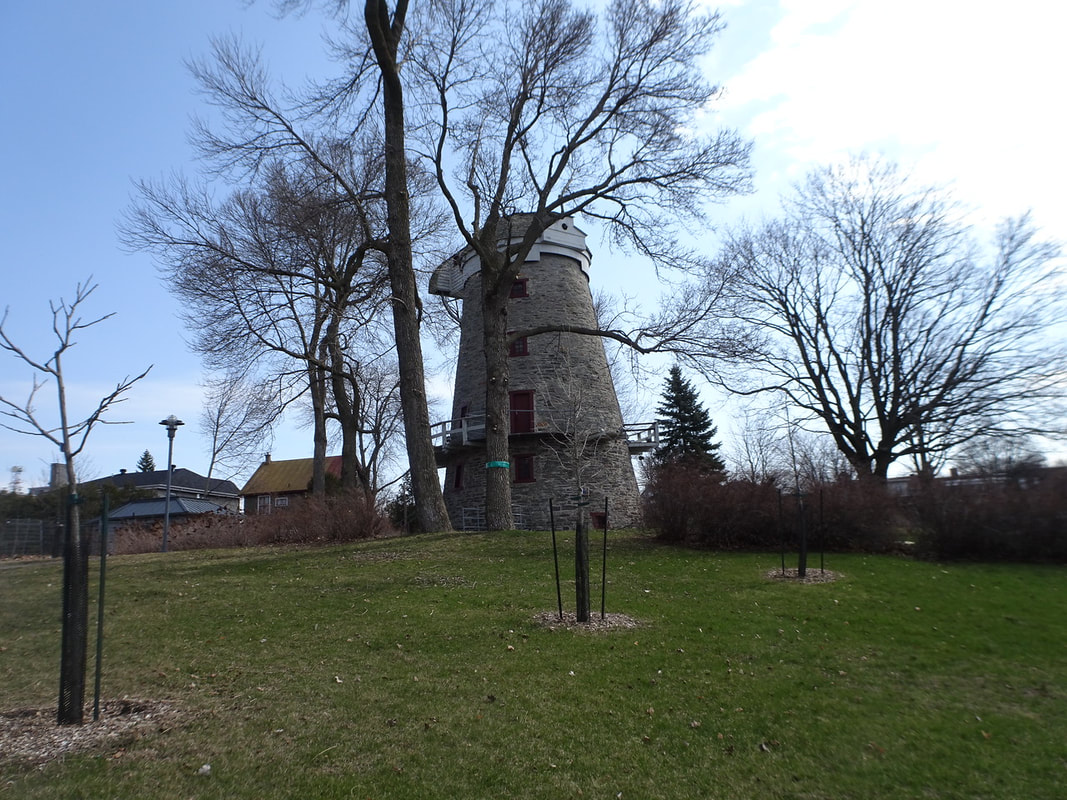 Moulin Fleming in Lasalle April 12, 2020
The composite's background is the Moulin Fleming in Lasalle and  is used as a symbol for that city.  The windmill, rebuilt in 1827 originally had four blades however it was no longer in use  by the end of the 19th century and by 1892, the year of the composite photo was taken, the windmill lost two of it's blades.  Sadly there are no blades at all on the windmill now.
The 1886 photo shows a building to the lower right of the windmill.  According to the historical this would have been the wood shed (no. 7) .  This shed is not present in the 1892 composite, and the composite's utility poles appear to have been built sometime between the two photos.
The 1891 Montreal Bicycle Club minute book reported the following officers: president A. T. Lane,  first vice G. Kingan, second vice H. Mackenzie, secretary A. Harries,  treasurer  W. S. Weldon, captain Louis Rubenstein, first lieutenant D.S. Louson, second lieutenant F.E. Adams, committee W.G. Ross, E.W. Barlow, D.S. Louson, J.E. Walsh.  Their photos as well as two others should appear in the upper vignettes (12 officers are mentioned and there are 14 vignettes).

Vignettes, with rank and name 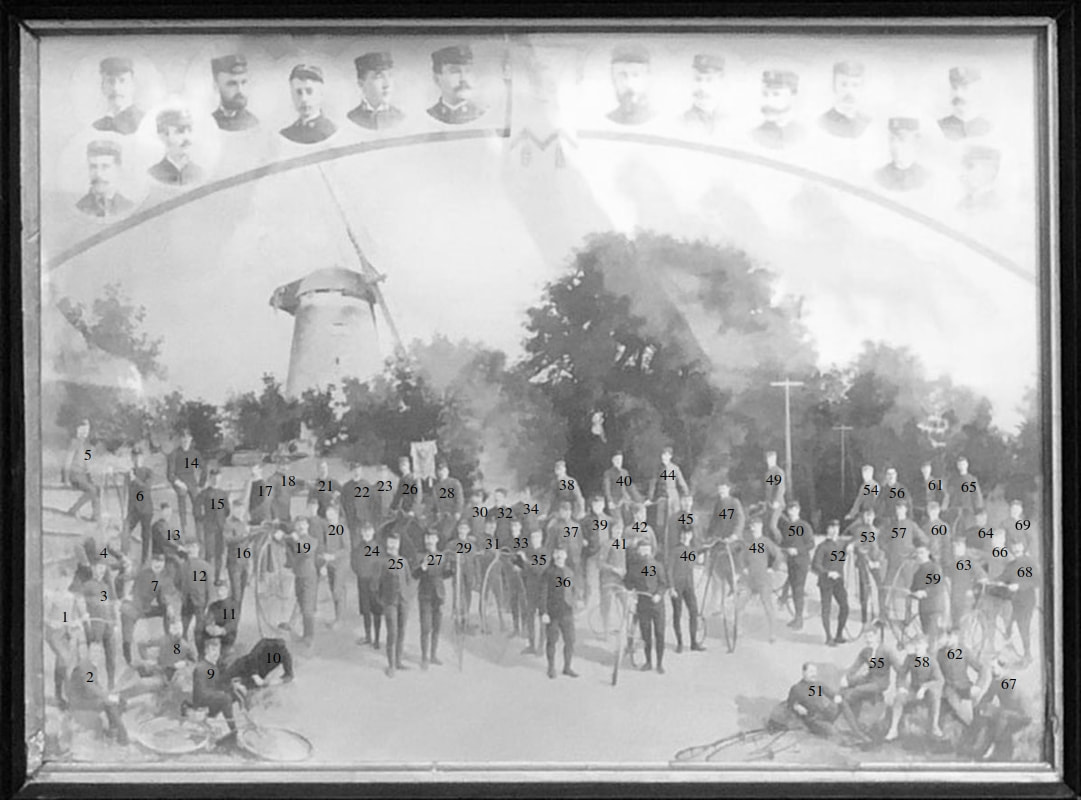 Main Group Names
(NOL is Not On List of 1891 ticket sellers)
List of 1891 Notman Composite Individual photos not found in overall Composite
This composite was taken during a transition period between High Wheel (ordinary) and Safety (modern style) bicycles.  The Montreal Bicycle club held races for both categories at the MAAA Grounds.  An advertisement from that era shows Louis Rubenstein promoted the new Safety Bicycle. 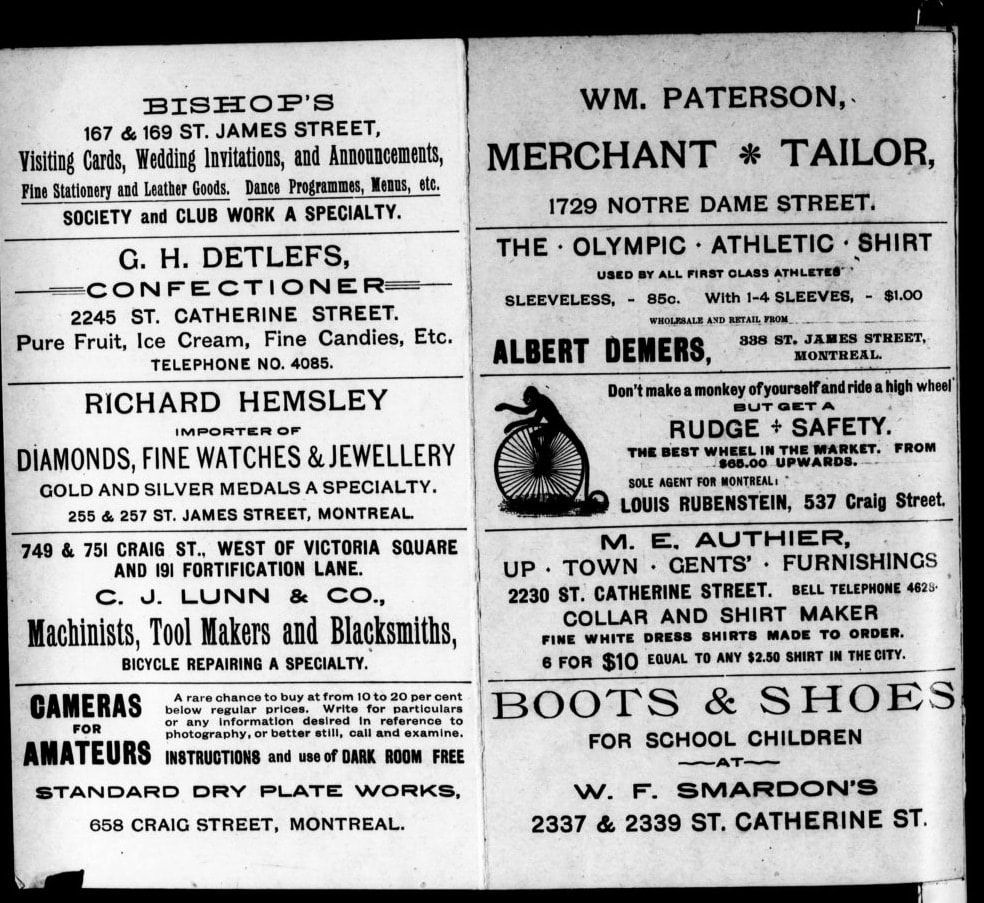 The Club Photograph was taken during the transition from Ordinary (High Wheel) bicycles to Safety (modern style) bicycles.  The following poster shows races held by the the club during this period.  The club minute book also has a hand written  list of which members sold how many tickets to the races.  It provides an indirect club membership during the time of the photograph. 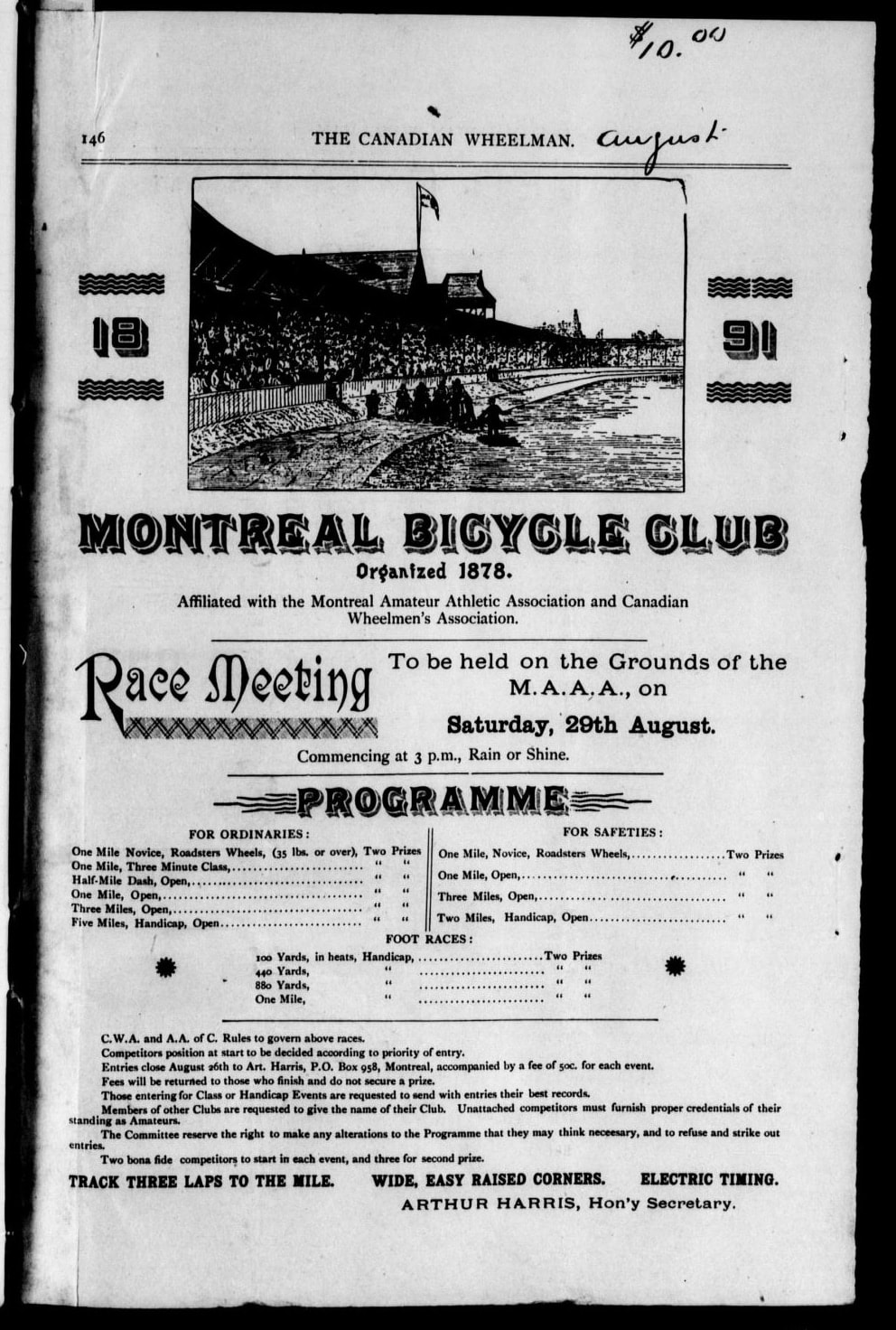 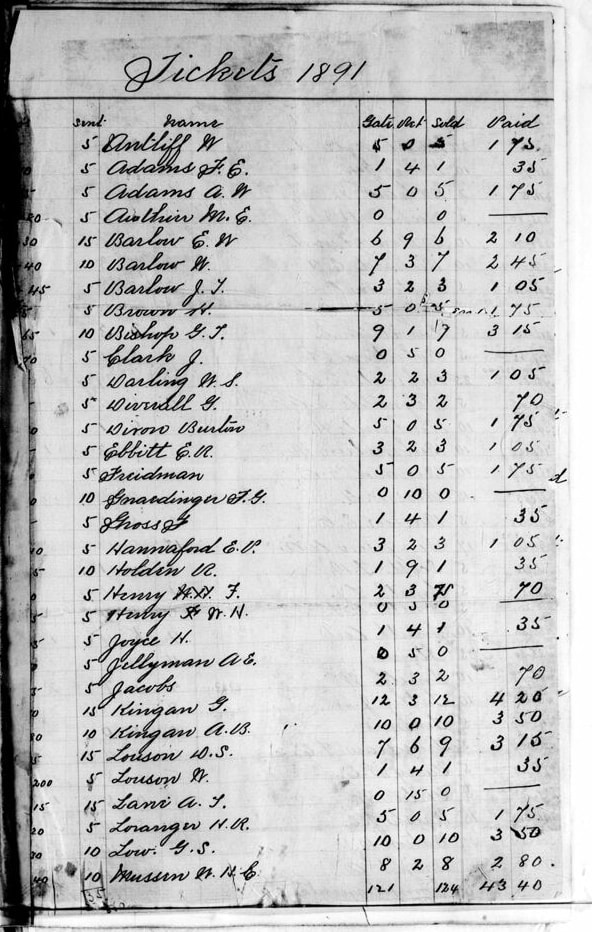 First page of list of Members who sold tickets to the August 28, 1891 races.
Some of the club members were also on the first team to win a Stanley Cup in Hockey. 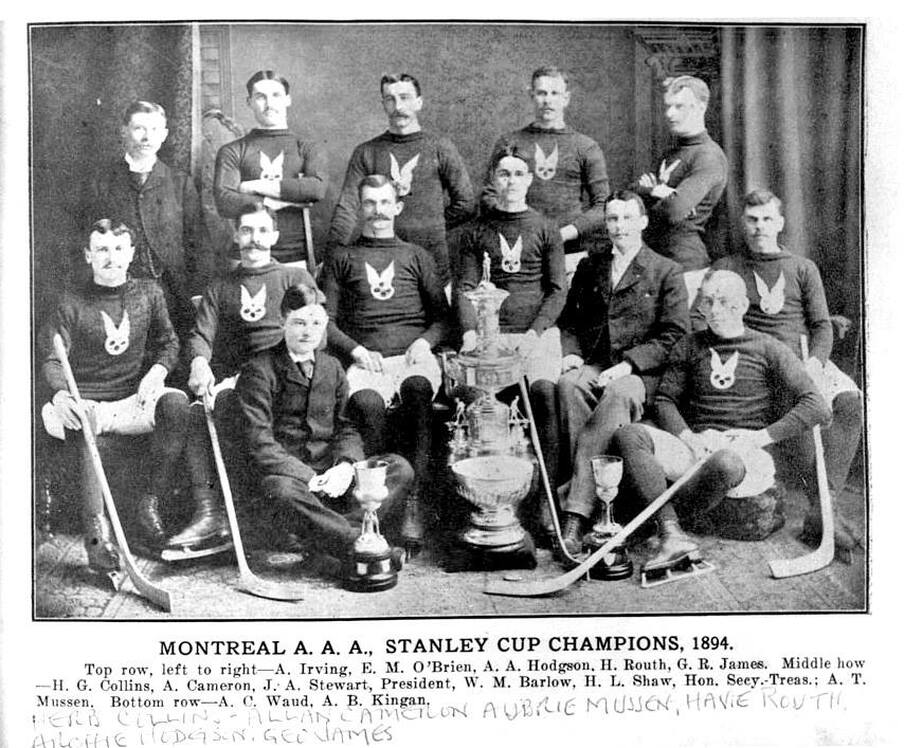