Present :  W.G. Ross, Louis Rubenstein & A.T. Lane Minutes by A.T. Lane
Length of ride: 92 km
Map of ride
Photgraphs
The members met at Vendome station, with Louis getting on at Montreal Ouest, for a train ride to St Jerome and  a day cycling on the the P'tit Train du Nord.
After a few knee poses for the camera, they got into the more serious business of cycling up the path and taking pictures of rivers along the way.
They went as far as Val David, in time for lunch, then cycled back in time for the 15:45 train back to Montreal. 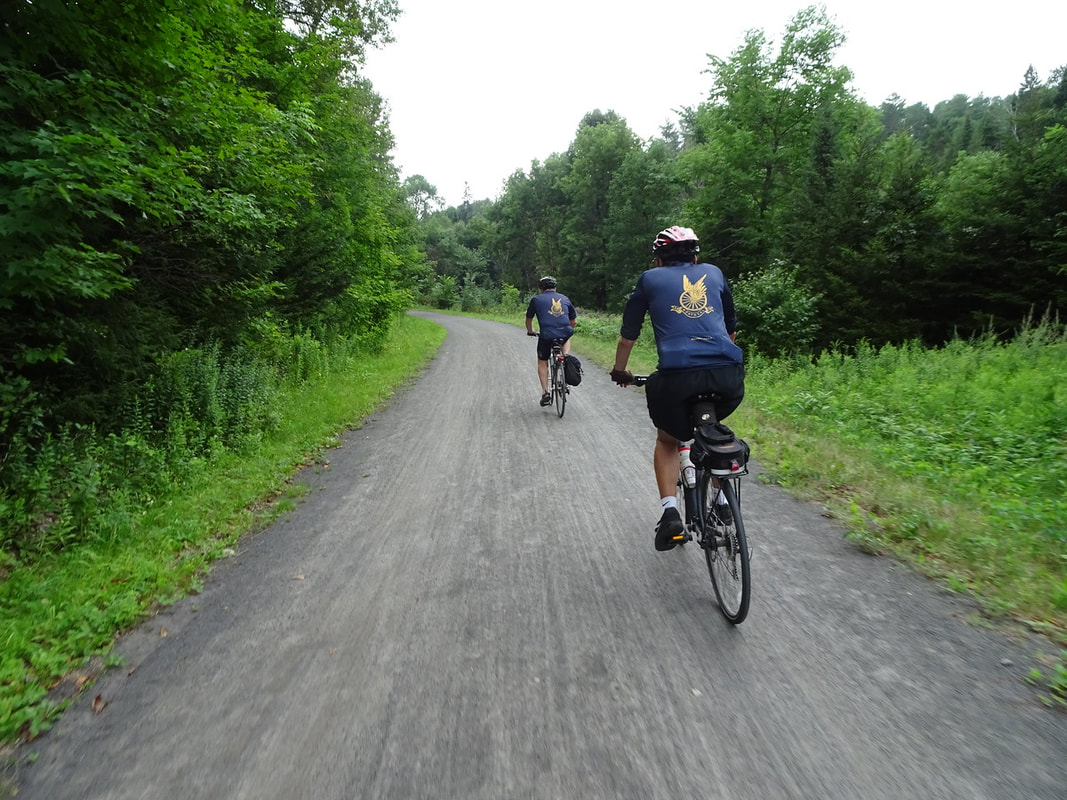 Present :  H.S. Tibbs,  Dorothy & Phylis Cole , Louis Rubenstein & A.T. Lane Minutes by A.T. Lane
Length of ride: 28 km
Map of ride
Photgraphs
,After Welcoming the new member, Phylis Cole (The Hearty One) the members set out to st Helen's Island, stopping to Kibbitz along the way with some fellow bikers they knew.
Osheaga, the music festival was on at St Helen's island, so they made there way along the river. They spotted a fox along the way.  Riding beside the river path led to a discussion of where exactly was Suzanne's place near the river?
After passing over the Jacques Cartier bridge, they explored the recently added eastern extension of the de Maisonneuve bike path.  Hopefully Sherbrooke will follow someday. 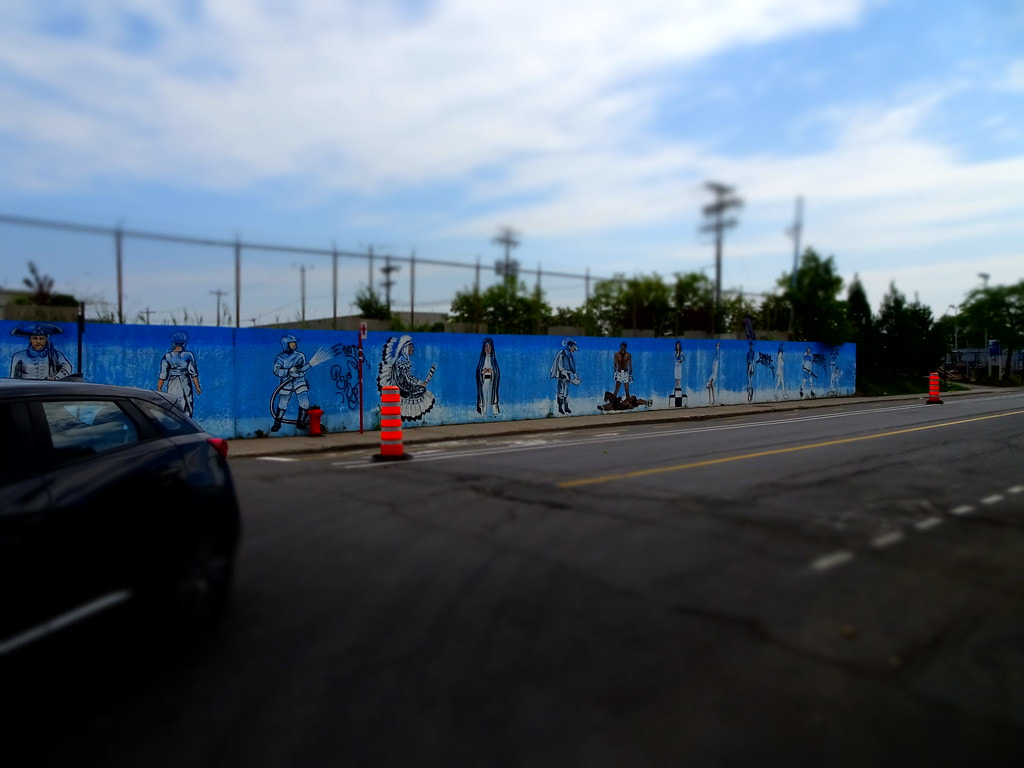 The members boarded the 8:15 Via train to Chambord, which was scheduled to arrive at 16:05.  This train seems to be frequently late as Via shares the line with freight. The delay was caused by north bound freight train returning rail cars.  The actual time of arrival was about 7 pm.  However the scenery and staff are pleasant and we all arrived in good spirits. 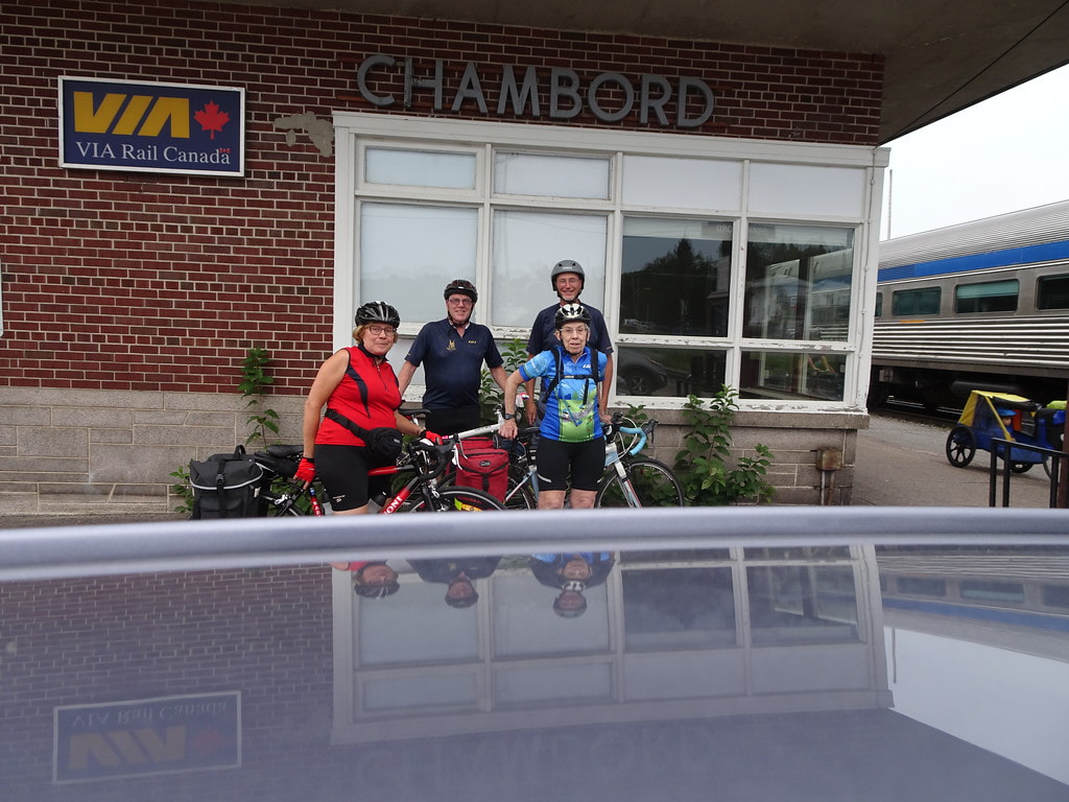 We had a short ride into Roberval and got our first taste of the Véloroute des Bleuets. Checking into our hotel in time for dinner. 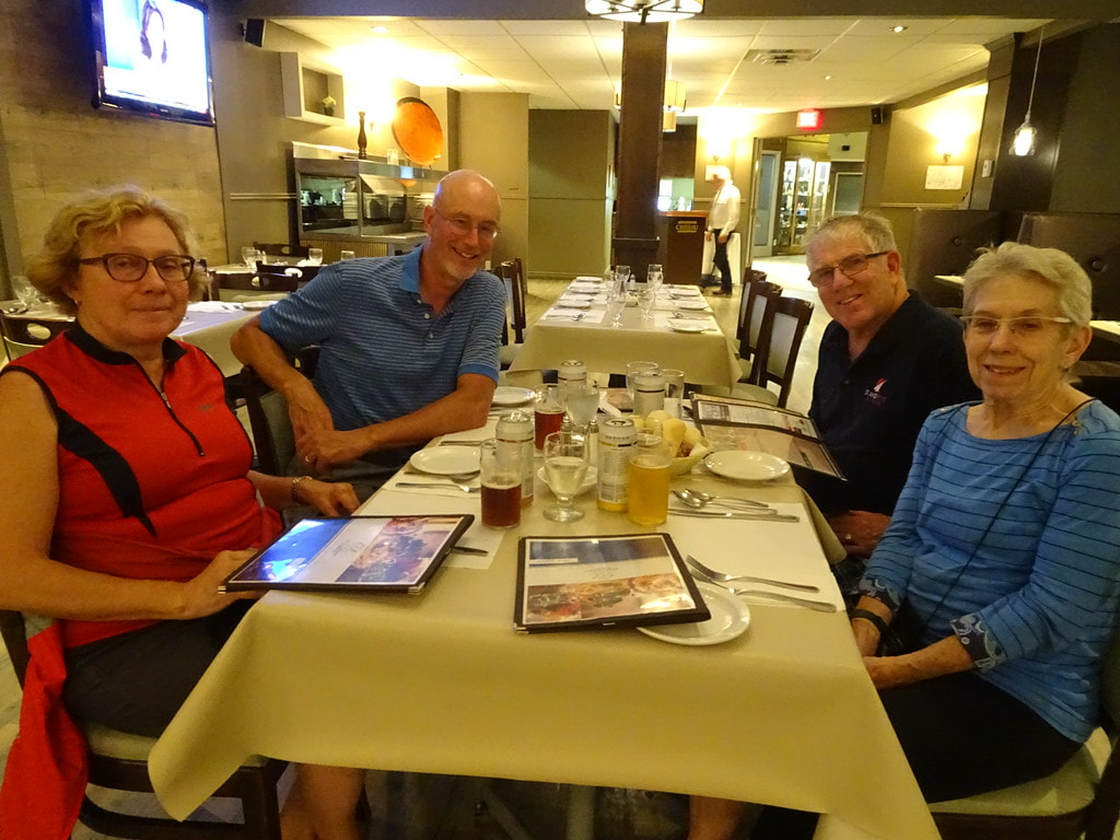 9 August  Roberval to Dolbeau-Mistassini
Length of Ride 91 Km
Map of Ride
Shortly after heading out from Roberval, they passed Mashteulatsh, stopping to take a few photos of concrete Teepee monuments. 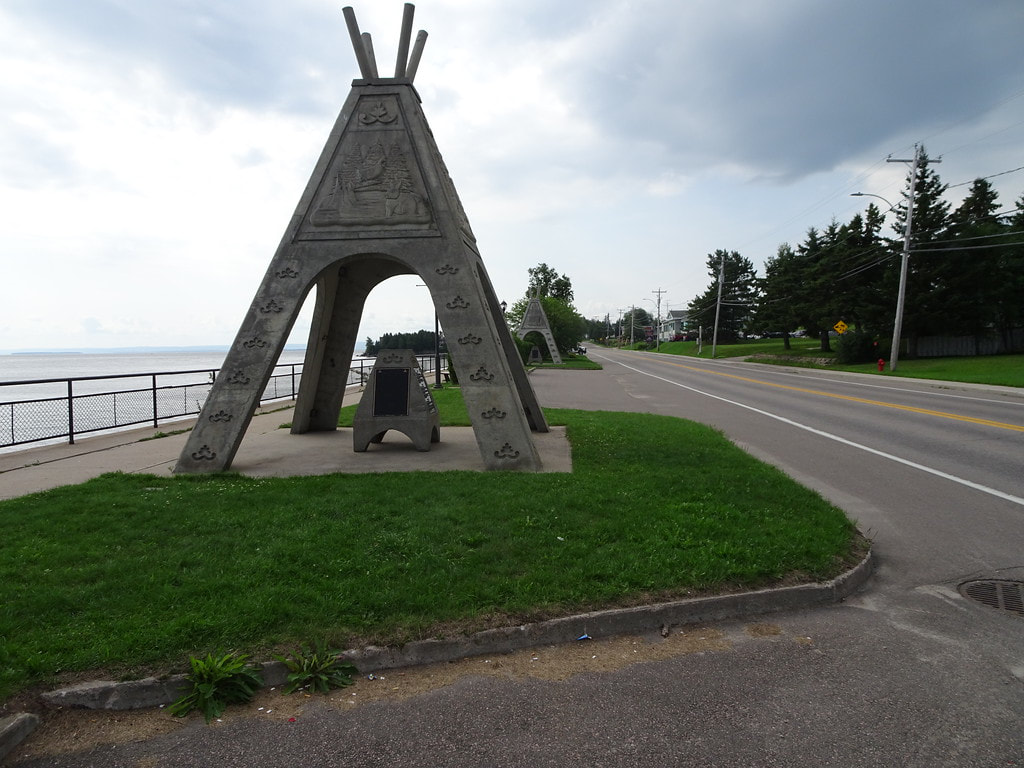 The path into Saint-Félicien runs close to a freight rail line, with varying scenery along the way.
At Saint-Félicien, we stopped at a grocery store, to pick up some items for a picnic. perhaps it was the unintended change in the camera settings that made this spot our picnic choice.
Between Saint-Félicien and Dolbeau there were some long stretches of riding on road shoulders, many sandy blueberry fields and large river rapids upon entering Dolbeau and passing into Mistassini.
10 August  Dolbeau-Mistassini to Alma
Length of Ride 88 Km
Map of Ride
Departing from Mistassini, we biked through forest trails, and took a tour of  LeVieux Moulin . At Peribonka we crossed by ferry to Pointe-Taillon National Park, where we did some blueberry picking before carrying on.
At the eastern edge of the park, there is a large beach were we stopped for lunch and cooled off in the water.
The veloroute between the Park and Alma again is a mixture of dedicated paths and wide road shoulders.
On entering Alma we stopped at the Véloroute des Bluets store to check it out.
After dinner in Alma, we navigated up the elevators to the hotel rooms for the night.

11 August Alma to Chambord
Length of Ride 50 Km
Map of Ride
The Véloroute des Bluets follows a mixture of dedicated paths and secondary roads within Alma.  There are many vistas overlooking lakes and forests. 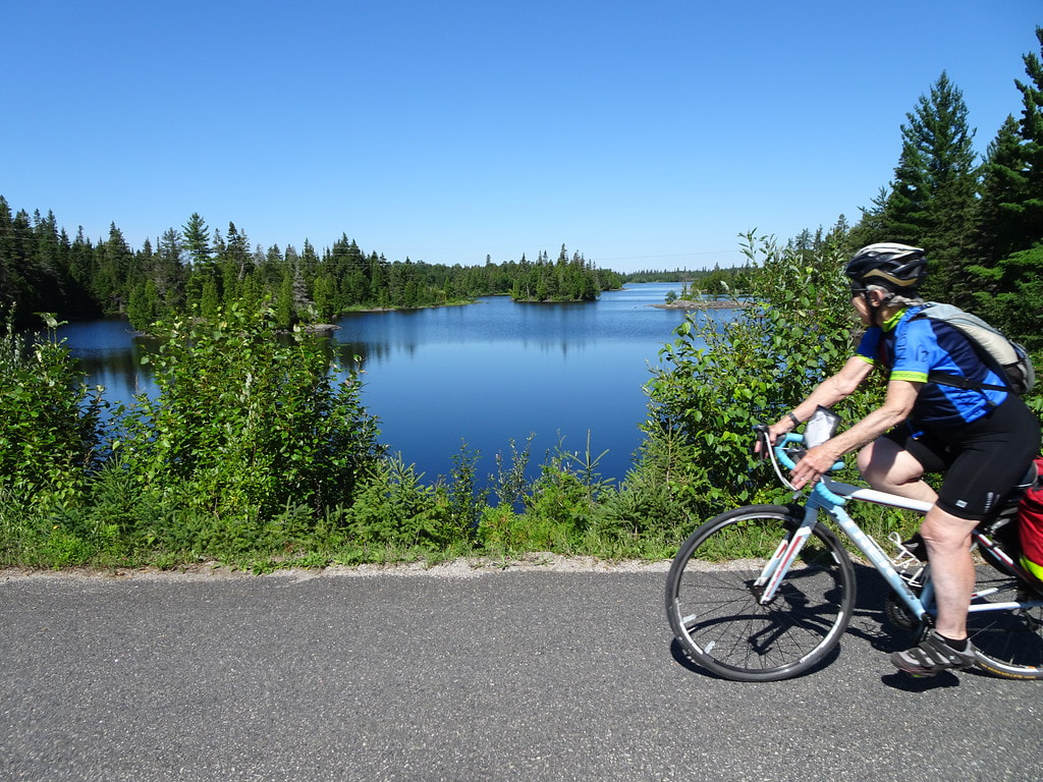 At Saint-Gédéon we stopped at a open air market and Micro Brewery.
Continuing on past fields of canola, Tee Pees, bridges, we came to rest at last at our château sur le lac.
12 August Chambord, Return to Montreal
Length of Ride 5 Km
Map of Ride

After an early morning swim, some additional contemplation, we headed out for the train home
At bit more riding and shopping before boarding the train for home. 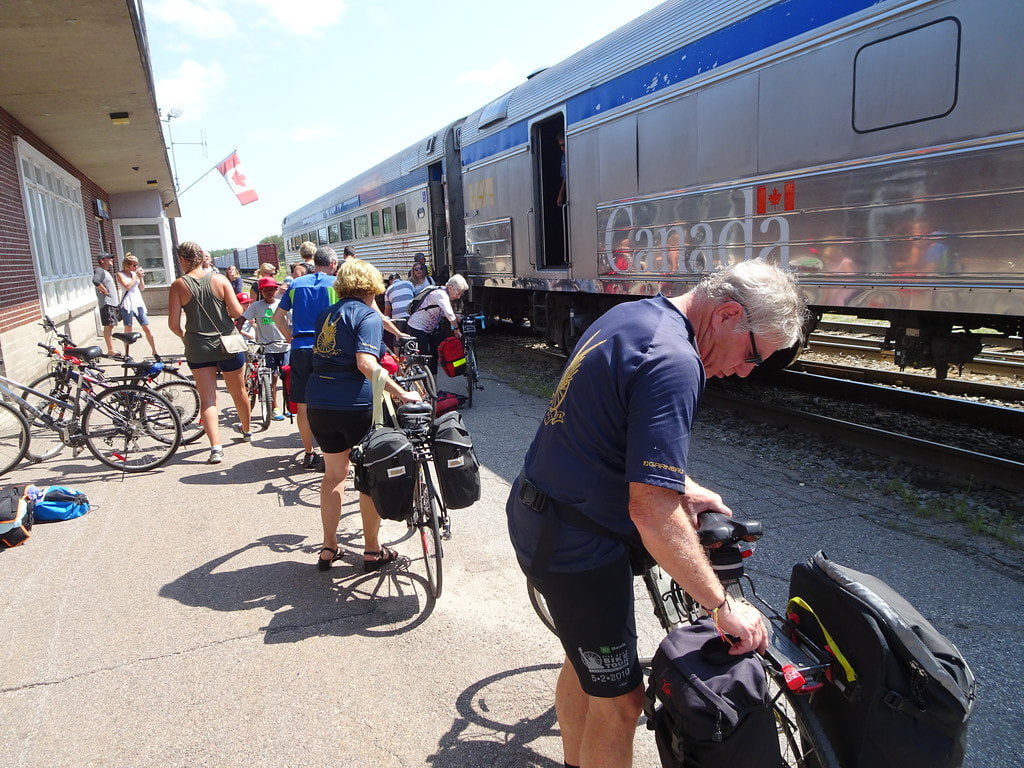 But alas!!  The train was stopped at Chambord due to a  communication tower problem. It returned to Jonquière where they stored our bikes, and we went back to Montreal by bus, taking a few photos along the way.
15 August Fixture Ride to Oka

Present :  W. G. Ross,  Phylis Cole & A.T. Lane Minutes by A.T. Lane
Length of ride: 86 km
Map of ride  (Return from Hudson portion only)
Photgraphs
The members met at Central Station and took the AMT train to Deux-Montagnes.  They then rode out to Oka, crossed the Ottawa river on the ferry and had lunch at the Willows.
Phlylis had to return to the  Sunnybrooke train station, so the return to Montreal was via Île-Perrot, Sainte-Anne-de-Bellevue, Senneville, then the bicycle unfriendly section north of and crossing Highway 40. 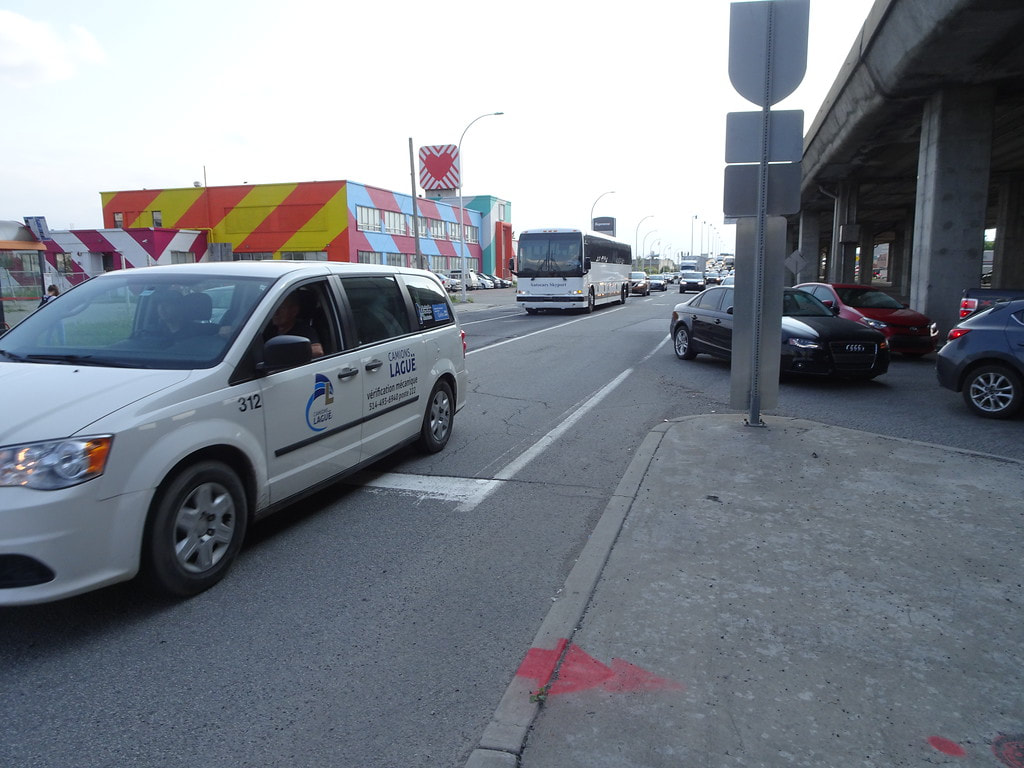 Present :   A.T. Lane Minutes by A.T. Lane
Length of ride: 76 km
Map of ride
Photgraphs
Solo ride by A.T. Lane, he did a 76 km tour around Montreal, stopping by the TAZ skateboard palace to check out examples of High Wheel bicycles and examples of streets of a width similar to Sherbrooke that have 2 uni directional bike paths and bus stops . (Photos are of O'Brien in St Laurent, north of Poirier)
19 August Visit to Technoparc

Present :   H.S. Tibbs, Louis Rubenstein & A.T. Lane Minutes by A.T. Lane
Length of ride: 37 km
Map of ride
Photgraphs
The members attended a press conference at the Technoparc grounds just north of the Pierre Elliott Trudeau airport.  Elizabeth May (head of the Green Party of Canada) announced that she would pressure the government to place the area as a protected space for endangered and rare wildlife.  Afterwards they took a walk to view the area which like most Montrealers, we had ever seen before.  It is truly a jewel within our urban  island that deserves to be protected. 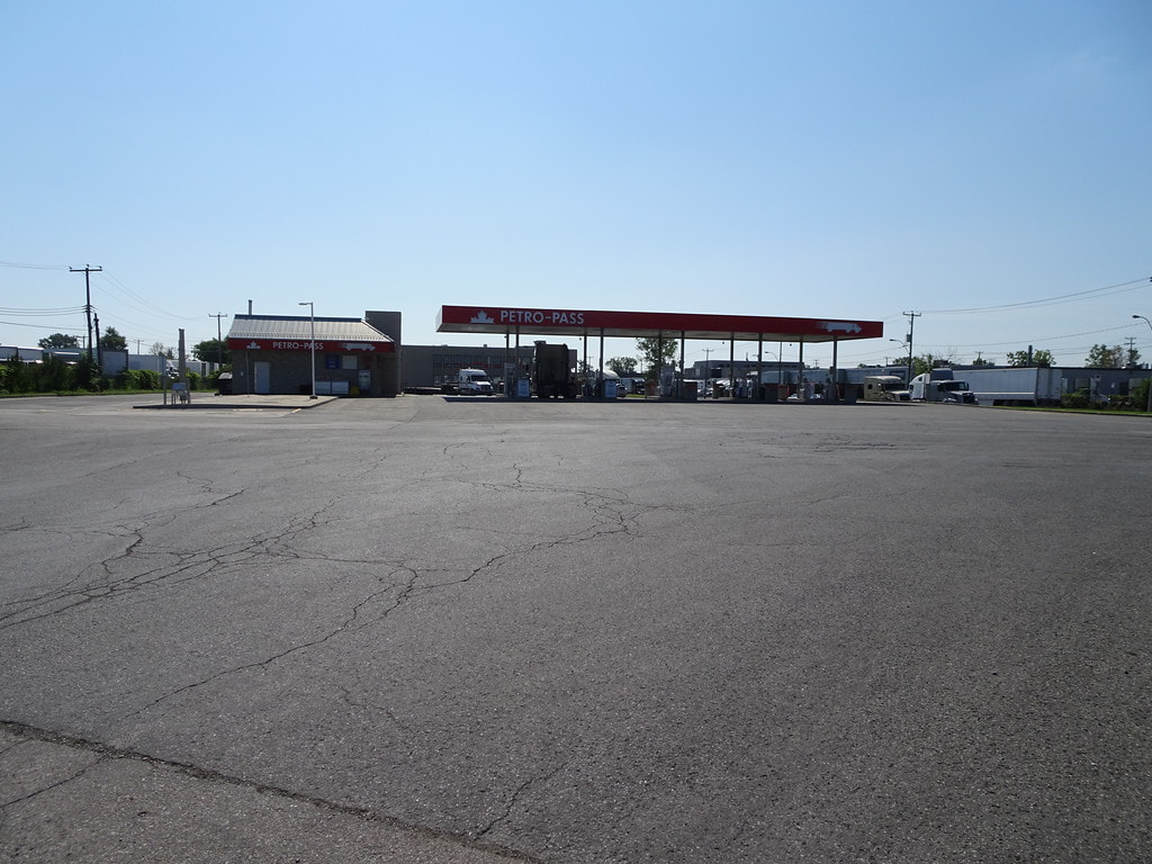 Plenty of underused space nearby the proposed protected area.  No need for more asphalt!
On he way back to Montreal, they stopped to take a photo of Blue Bonnets racetrack which is in the process of being demolished.  The original racetrack of the same name was located near the present day Montreal Ouest train station.  It was often mentioned in the old MBC minutes as a site of meetings and bicycle races on the track. 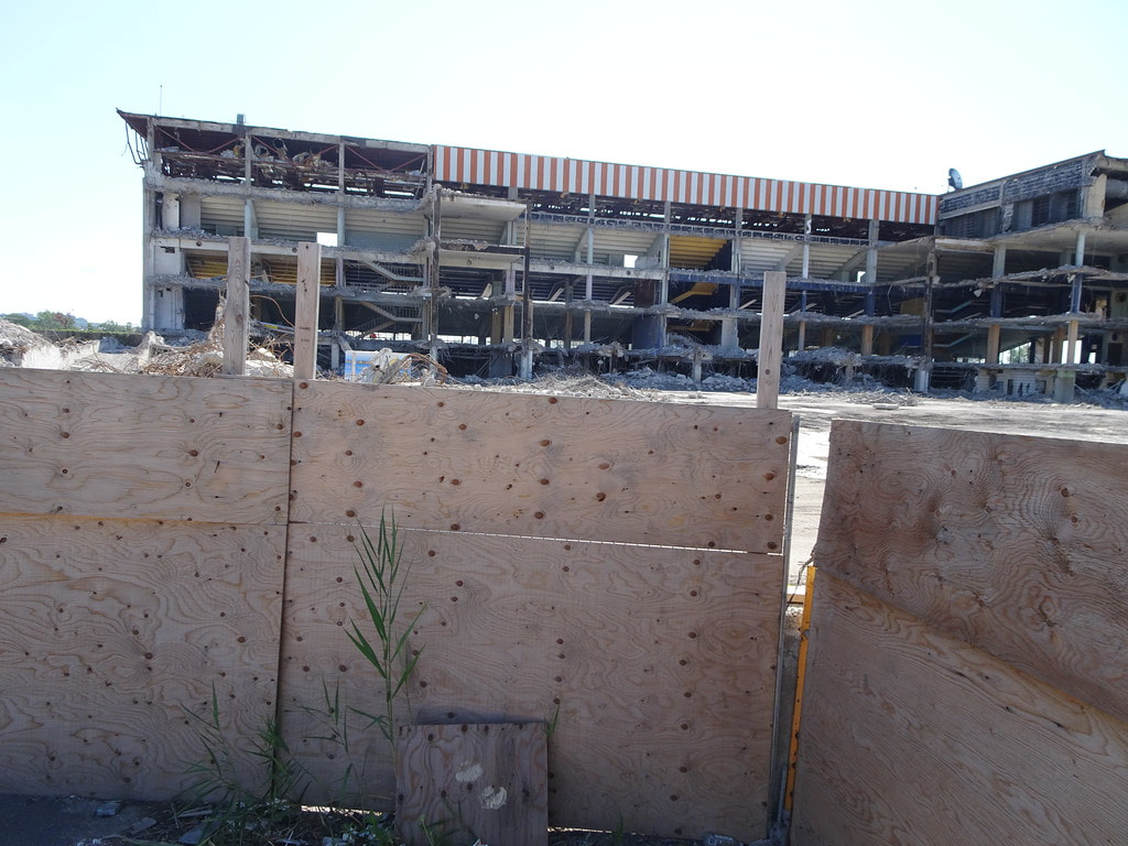 Present :   W.G, Ross, Louis Rubenstein & A.T. Lane Minutes by A.T. Lane
Length of ride: 85 km
Map of ride
Photgraphs
Early on a rainy, windy, morning our intrepid members set out on the 7:00 am train to Repentigny.  All went well until arriving at the station, the doors this train uses vary depending on the height of the platform.  W.G was expecting to use the same door as he used to board and missed the station stop entirely! After some messing about between the Repentigny & Terrebonne stations the three were finally all reunited.
Aside from a few light showers now and then things went well, entering the charming town of Vieux Terrebonne.  This section of bicycle path was new to all the members and was a little hard to follow because of the abundance of alternate bike spur lines.  After passing the town we took a recess for coffee etc.
Soon after the recess, the group became separated again as Louis took a low road  bike spur leading to the river, while A.T. & W.G. took the high road leading to a forested path far inland from the river.  Due to a battery failure, communication between the two groups ended.  The forested high road twisted and turned until finally the two came to the bridge to Laval and familiar territory.
From that point on it was only a matter of pedalling, or taking the metro back to Montreal. 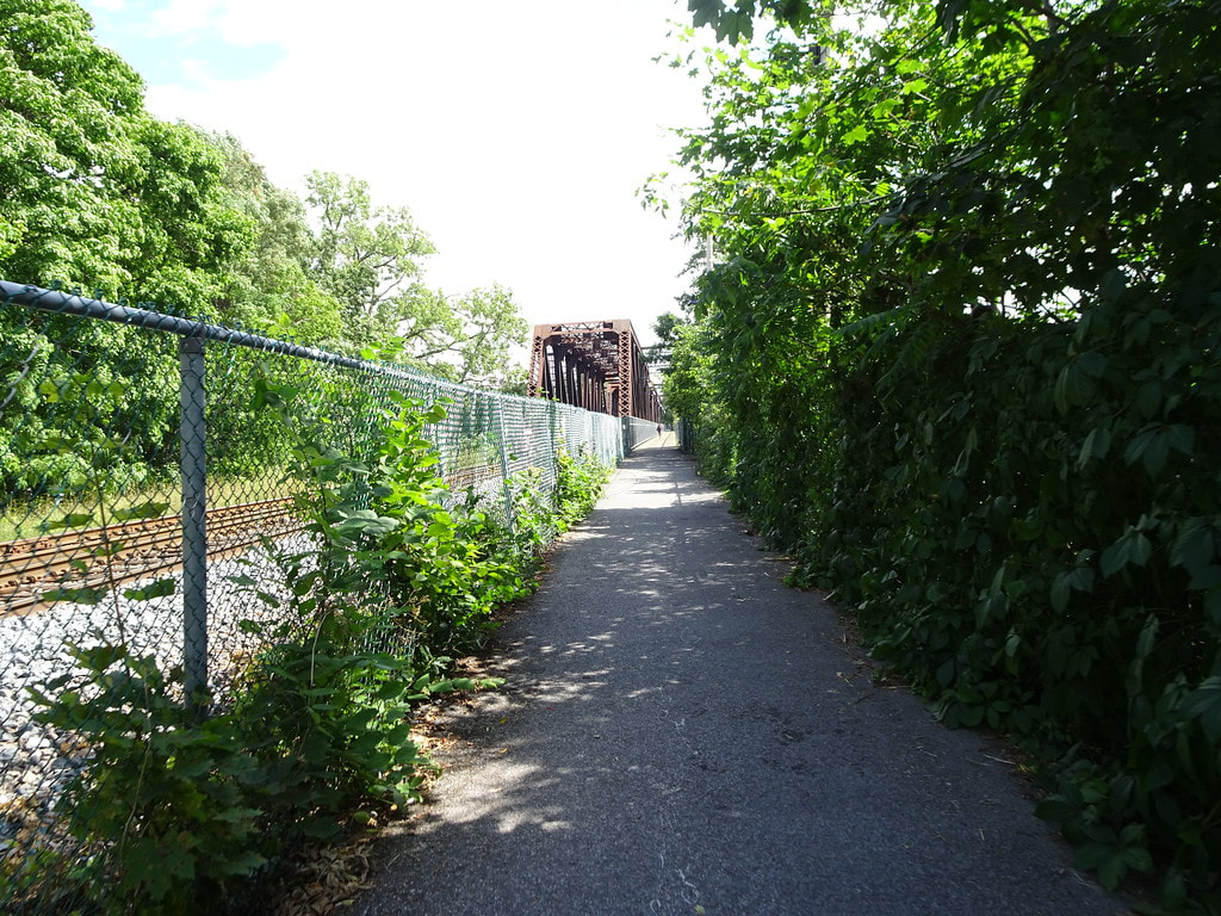 Present :   Karl Kron, H.S. Tibbs, Daisy Greville, Annie Londonderry, Louis Rubenstein, A.T. Lane & 2 visitors from Ireland Minutes by A.T. Lane
Length of ride: 60 km
Map of ride
Photgraphs
Meeting at the ferry dock before boarding to Île Saint-Bernard, they were greeted on arrival by by sights of an Egret and Monarch Butterflies.
After the obligatory coffee, and group shot, they headed out to Kahnawake. 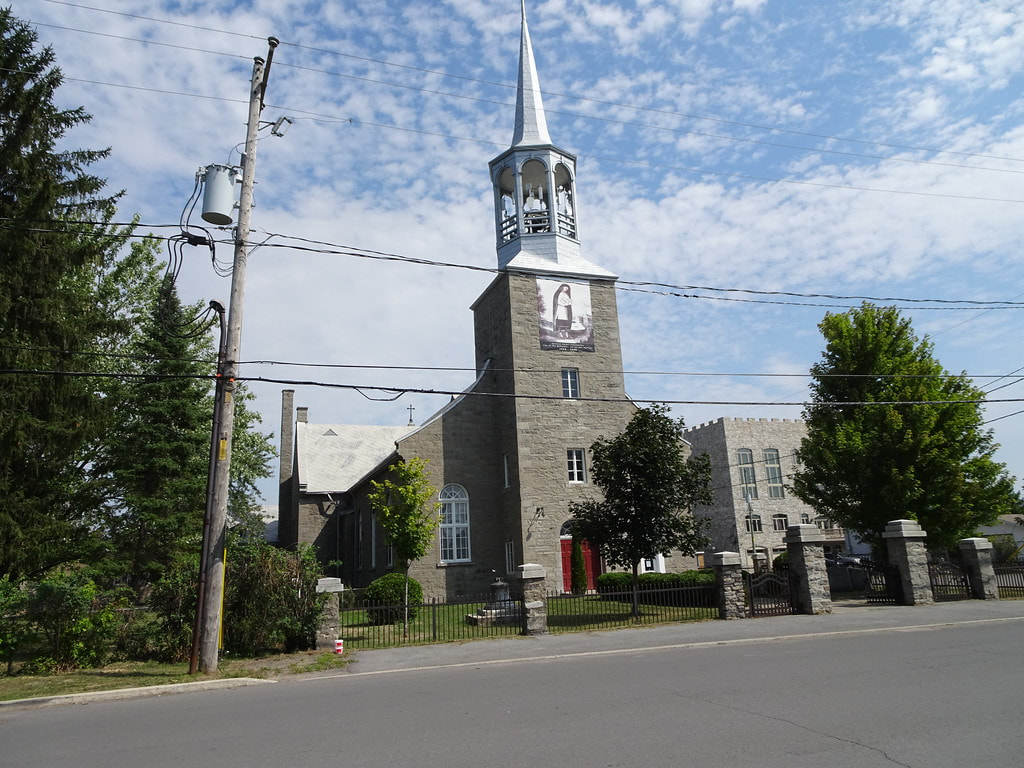 East of the Mercier Bridge, we followed the gravel road beside the Seaway, then took a lunch break in the shade of a tree beside the Lachine rapids at the RécréoParc.
Continuing on the Seaway, we came to the construction of the new Champlain bridge alongside the old one, then crossed over the Ice Bridge, finishing the ride at Atwater Market. 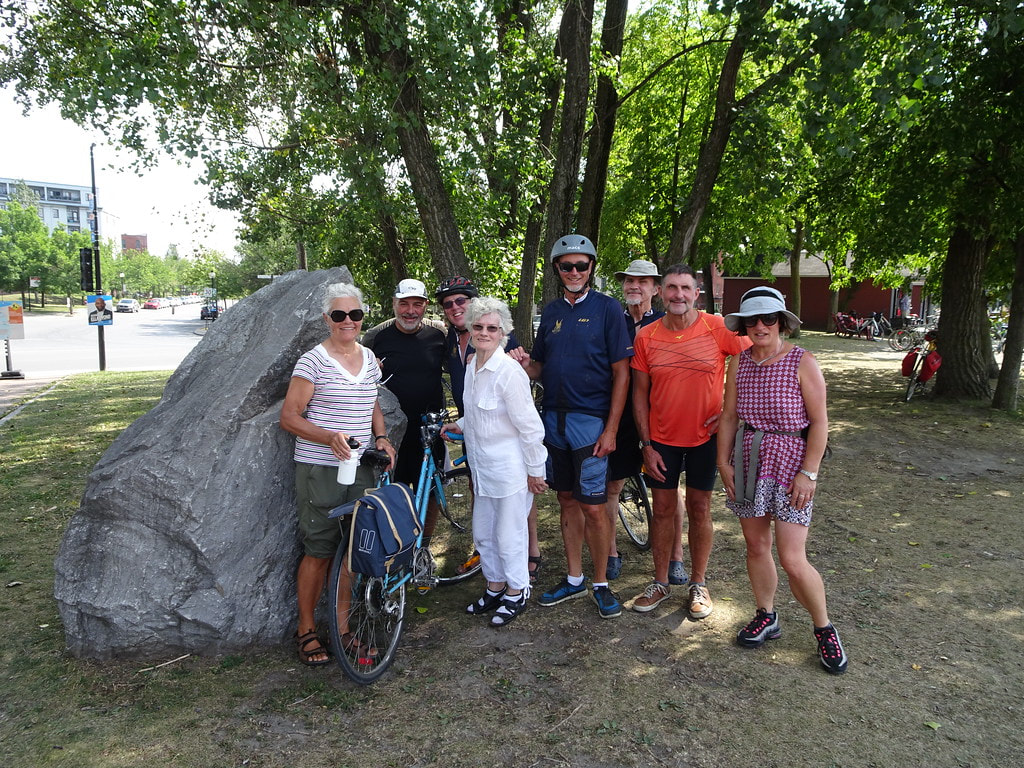 Six members of the Montreal Bicycle Club joined in a tour of the historic Rivière Saint-Pierre, which was organized by les amis de meadowbrook.    Tour guide Danielle Plamondon, featured in the film LOST RIVERS , showed what lays underground and spoke of its ecological impacts. Fellow guide Louise Chênevert, told us of its value to First Nation’s culture and its history with the Lachine canal.  Together they showed how important the river is and why it should be daylighted. 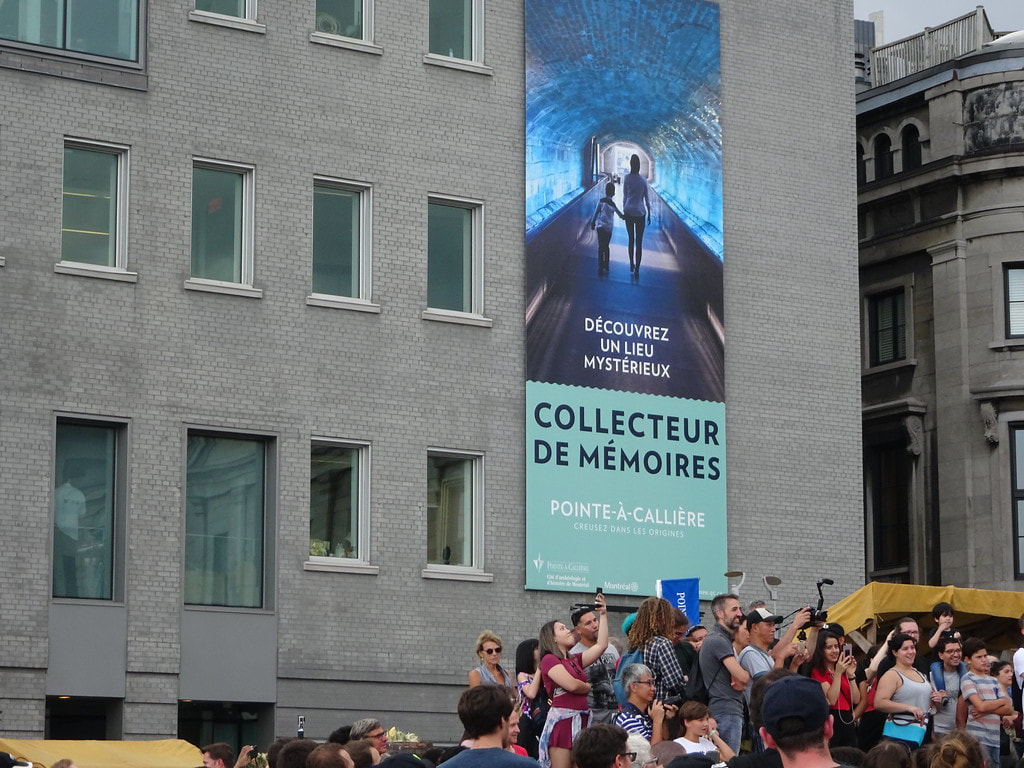 Present :   W.G. Ross, Joan Cole, G.T. Bishop, Louis Rubenstein, A.T. Lane Minutes by A.T. Lane
Length of ride: 92 km
Map of ride
Photgraphs
The members gathered on the train to Candiac, then headed out on country roads towards Saint-Jean-sur-Richelieu.  Joan suffered a flat tire but that was quickly repaired by the group.  Upon reaching Saint Jean, we all relaxed at a Belgian cafe, Le Manneken Pis.
Suitably refreshed and relived, the group headed out again along the canal path that leads to Chambly.
From Chambly, we returned to Montreal along the Route Verte, crossing the Jacques Cartier bridge and posing for a group shot near Berri. 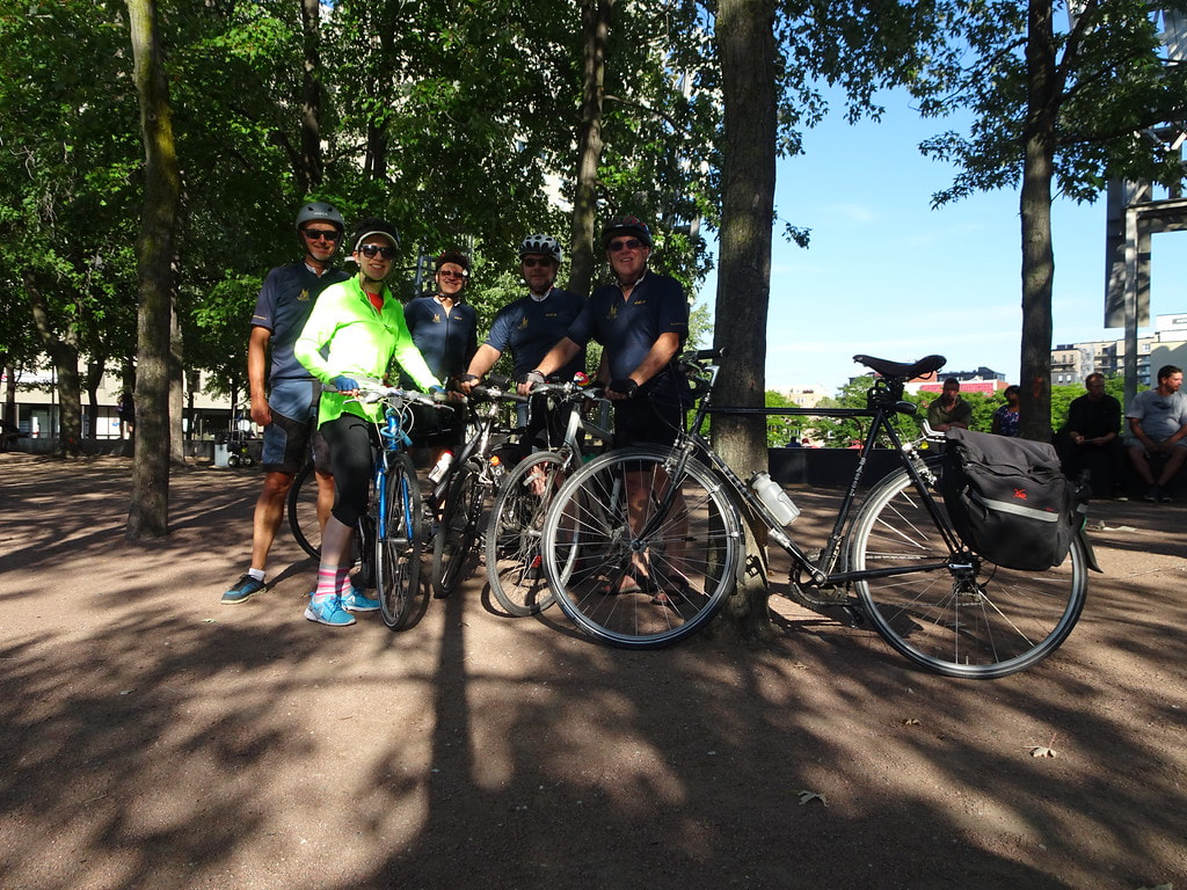