français
A Re-Founding meeting of the Montreal Bicycle Club was held 0n the 21 March 2017.  Using the original minute book from 1878 as a guide, the meeting reviewed the Bye Laws, and made revisions they as thought necessary. 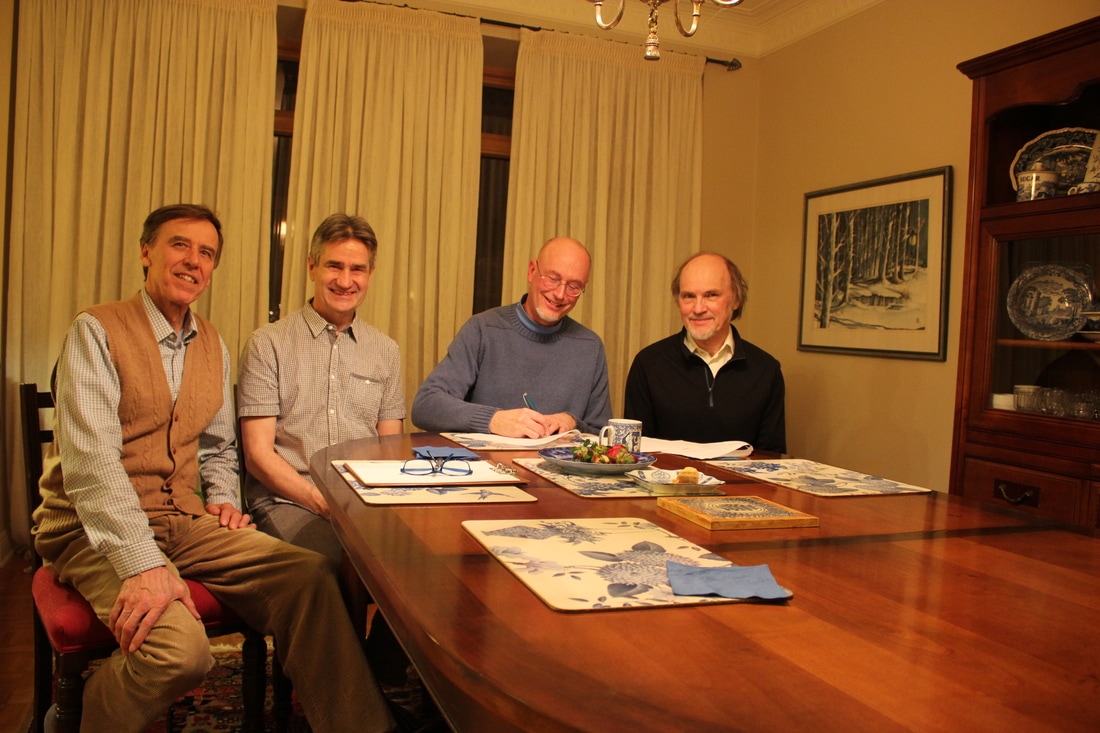 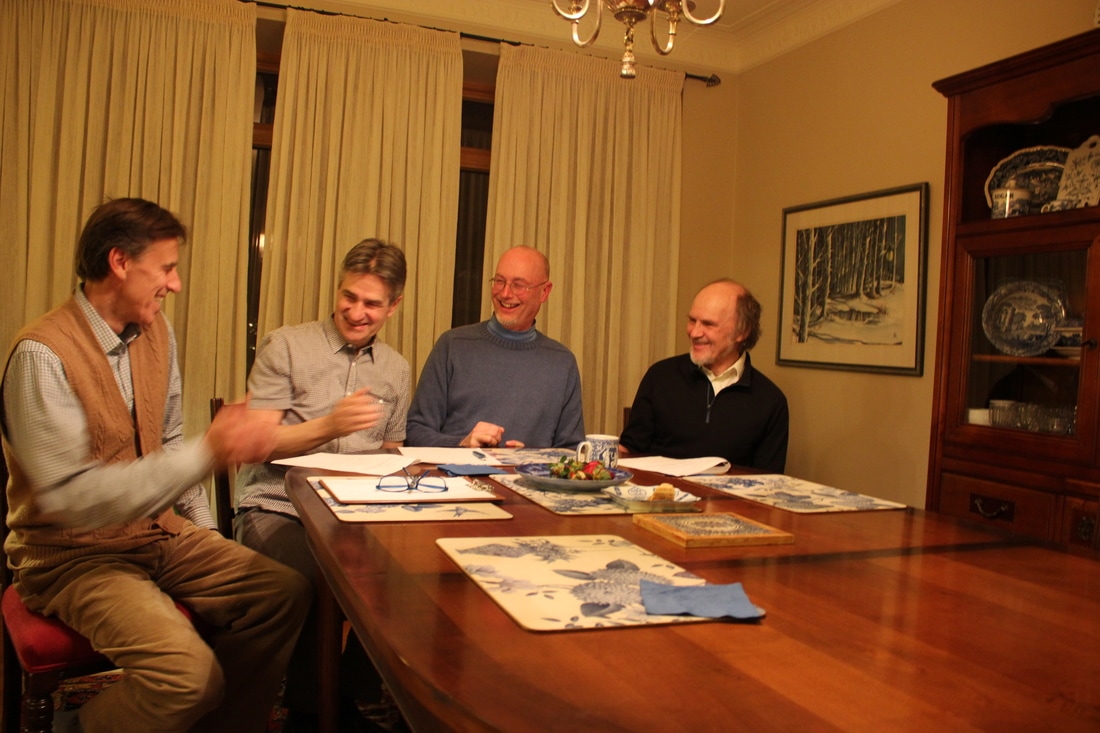 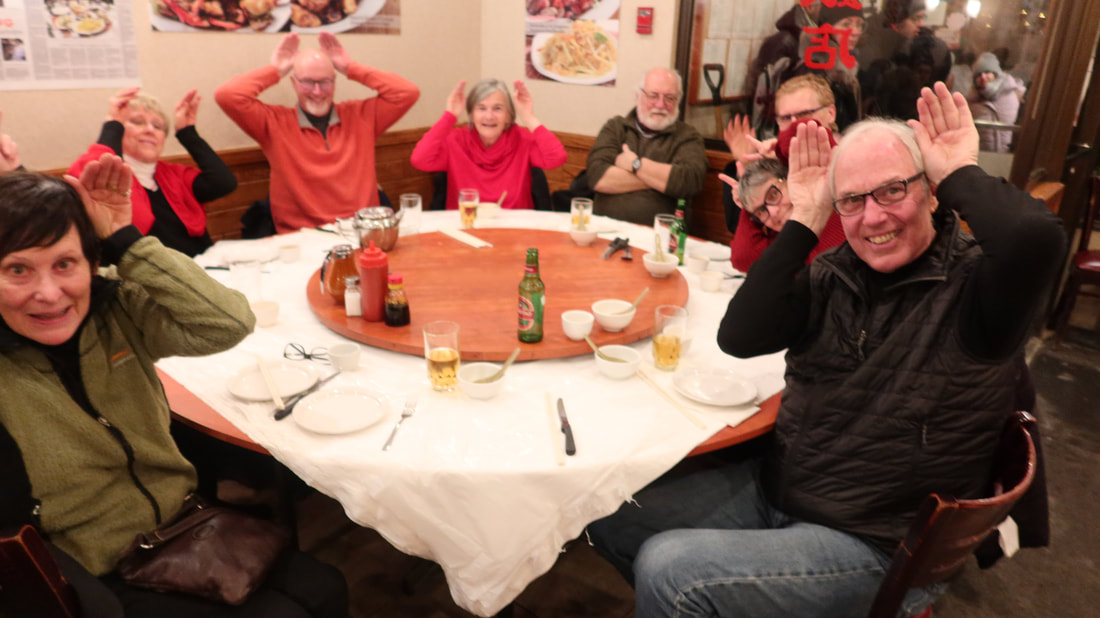 On 21 March 2017, Messrs Dan Lambert, Roger Jochym, Henry Nesvadba and Malcolm McRae met by appointment at the house of the latter, 812 Upper Belmont in Westmount and proceeded to the business of re-forming a bicycle club.

After some consultation it was decided the the underwritten Constitution and Bye-Laws should be adopted and remain in force until the formal General Meeting as provided in the Bye-Laws and should then be submitted to that Meeting for approval or amendment.

And it was resolved that the members present should hold the office of Committee till the said Annual Meeting.  Annual subscription not to commence until the First  of May 2017.

II.   That the Membership of the Club be open to all Riders and persons who consider themselves “Friends of the Wheel”

III.  Applications for membership will be made available on the club website.

IV.  That the formal uniform of the Club be a Dark Blue Knicker-bocker Suit with "Fore & After" Cap of the same colour. An informal riding uniform will be decided upon by the club.

V.    That the distinctive badges of the Club be Montreal Bicycle Club be the Winged Wheel fashioned in the style of the original club.

VI.   The Annual Subscription rate will be set each year.

VII.  That the Annual Business Meeting of the Club, at which the committee officers for the ensuring year shall be elected be held on the First Monday in May at such a place as the committee may pick and will post notice of such meeting on the club website.

VIII.   That the Opening Meet be held on the Saturday following the Annual Meeting or on any more convenient day that the committee may fix.

IX.    The the management of the Club be acted in the hands in the hands of the a committee who will be authorized to run the website and write letters on behalf of the club.

X.      That every excursion of the Club at which there are present at least three members of the Committee be a recognized ordinary Meeting of the Club.

XI.   That the Committee be entrusted with the entire management of the affairs of the Club.

XII.   That Members of the Montreal Bicycle Club be allowed to join any other bicycle club on the Island of Montreal and that members may also be required to join wider bicycle associations as the club sees fit.

XIII.  That any Member violating the rules or guilty of any misconduct may be expelled from the Club by request of the committee

XIV.  That a Special General Meeting must be called by the committee upon receipt of a written requisition signed by six (6) Members to be convened as in Rule VII

XVI.  The the Club when out riding shall be under the control of the Captain, who is the organizer of such ride, who if unable to attend, will appoint a Deputy and notify the committee of the fact.

XVII.   That the Sub-Captain shall always ride in the rear: and if unable to attend will appoint a Deputy as in Rule XVI

XVIII.   That no Member while riding with the Club shall be allowed to pass the Officer in charge without his permission.  Rides may be broken up into different sub groups as the need arises.

XIX.    That only the Captain or Sub-Captain or other Officers acting in their absence be allowed to use whistles or other signals when out with the Club except in cases of emergency

XXI.    That no Alteration in, or Addition to the Rules be made except at a Special General Meeting to be convened as in Rule VII.  Such Addition or Amendment be subject to confirmation or rejection at the Next Annual Meeting