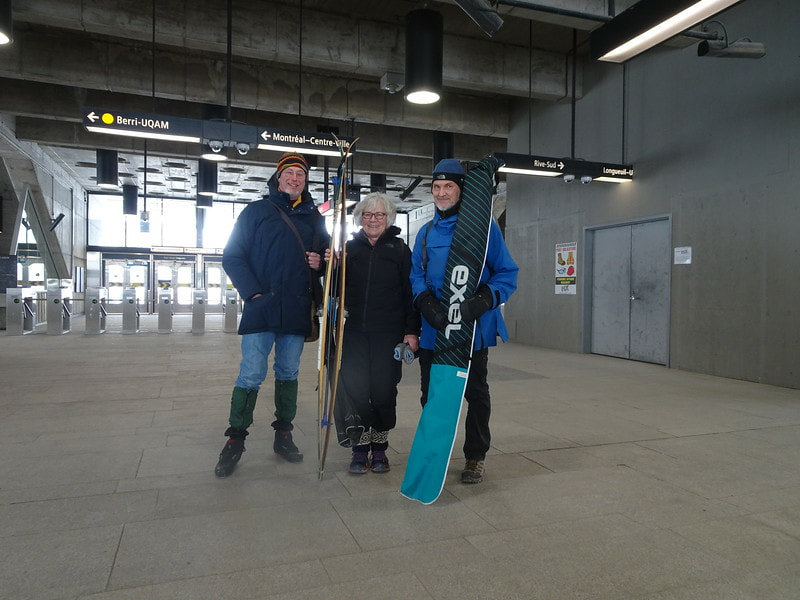 The members took the Metro taken to Ile Ste Helene. We could not find the ski trail but able to watch from a very close vantage point the canoe races in the  river. Very nice and good views of city.
However, very icy conditions all over the island made for rather poor skiing.
A few interesting remarks about A.T. Lane. We got separated from H.S Tibbs and A.T. Lane was willing to leave Tibbs in the
woods. When Susan mentioned that Tibbs might have broken his leg Lane, said "not to worry, the squirrels would look after him until spring". This brings to mind the trip along the river from the Mercier Bridge to Verdun.  Louis Rubenstein fell and was in a rather tough crevasse and struggling to get up. Susan B. Anthony was ahead and watched the scenario unfold. A.T. Lane stood watching the poor tired man struggling to
get up. After some time A.T. Lane decided to head down to help.  A round of applause should go out to Annie Londonderry who was very attentive to Louis and tried to help him get up out of the crevasse.  A.T. Lane seemed to enjoy watching  Annie’s effort to pull Louis up.  His stance was one of relaxation.  Louis‘s fatigue was evident earlier in the morning.  At the restaurant stop Louis asked A.T. the time. Lane said 11:30 and Louis said “I thought it was 4:30 pm”.

The MBC reconvened at Mickey's café in Morin Heights for a Tuesday fixture of skiing.   From there we were led by our gracious hosts, Emily and Henry, to their country house on lac Gustav.   Last minute preparations and we were off for an exceptional, some would say a classic, day of skiing.   Henry led us along his newly cut trail to a challenging zig-zag descent to the Viking South trail.  That was the beginning of a long loop.   We traversed lac Hill, managed the fast chute down to lac Dey, and then headed westwards along a string of small lakes and frozen wetlands.   Swinging more towards the north  a series of climbs led to another small loop of trails that were part of lac Notre Dame.   Back again on the Viking South we cut a trail across lac Perdu as a short cut.   Long descent to lac Sylvain, into a narrowing valley, and a short but difficult climb back up to our starting ridge and trail back to lac Gustav.  The weather was ideal, high thin cloud that filtered out any bright sunlight and gave us some snow mist precipitation at times.  The fixture was rounded out around stove fire and fine supper and conversation.

The members met at the Shaika Cafe and discussed the upcoming Westmount Historical Association presentation. 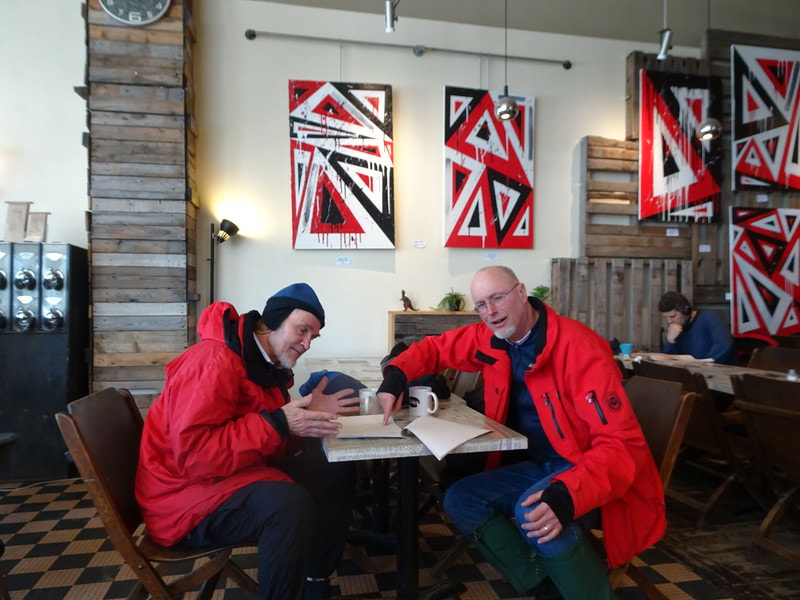 A lonely A.T. Lane finished reading a great book by Yuval Noah Harari, then headed out on the road.  The de Maisonneuve path was very cleaned very well.  Perhaps along the bike symbols along the former Lacrosse grounds could be changed to Penny Farthings?  This is the part of Montreal where they were first frequently used.
There is a new detour of the de Maisonneuve path along President Kennedy.  Congratulations for the clear bicycle light at the corner of President Kennedy and McGill College.  This is in sharp contrast to the one at de Maisonneuve and Claremont.  Unfortunately the city does not see fit to clear the connection through Jeanne Mance park between the Parc Ave bicycle path and the Rachel bicycle path. 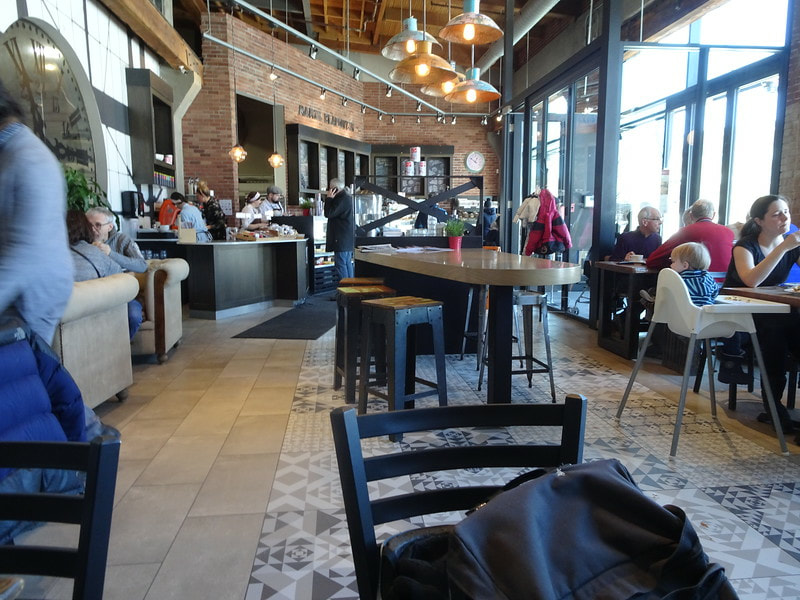 I did make it to the Angus yards.
12 March Ski Replay at Lac Gustav

Once again the MBC convened at Mickey’s Café in Morin Heights against an incredible backdrop of snow with a topping of fresh snow dust.    We organized our little convoy and headed out to lac Gustav.   It was tricky and one car had to be left at the parking lot for lac Gustav because of back sliding.   Thus some made the last kilometre on foot.   We set out on skis near noon.   The conditions were pristine and deep, breaking trail for more than half the outing.   Fortunately Sharon and Henry had broken a long portion of our loop the day before.   But it was still arduous.    We began by heading westwards on lac Gustav and then did some bushwack skiing to a the lac Notre Dame loop.   Roughly half way around the loop we traversed lac Notre Dame and reconnected to its northern section after a difficult climb up from the shoreline.     Tuques-off to Henry and his ski mushers who broke trail.   There were problems with occasional snow build-up on skis because of particularly sunny openings in the woods.    But the beauty of the boreal woods in full winter and the long views across lakes compensated amply for the ardour of the ski day.   Our final ascent from lac Perdu had gratefully been broken by the snowshoeing of Emily and Anna.  The ski day was again enjoyably rounded out with a supper at our hosts’ table, Henry and Emily, thanks again. 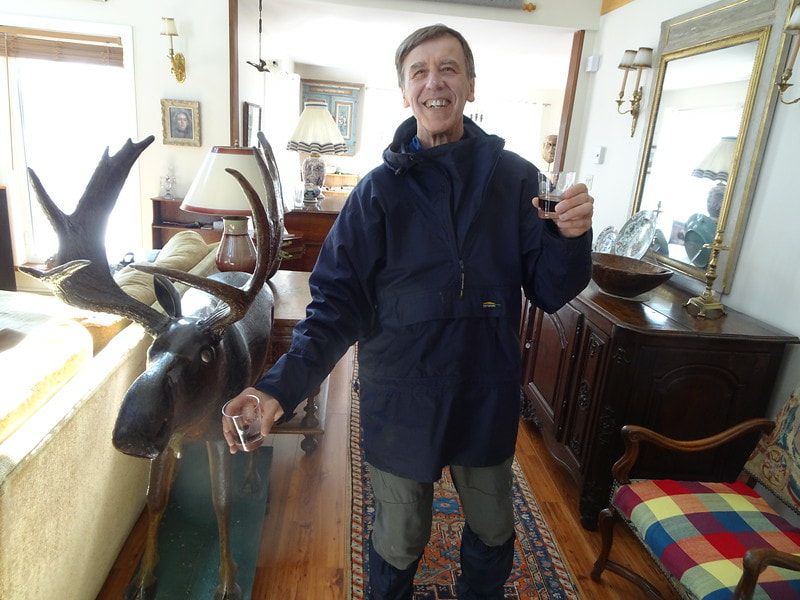 Present :   A.T. Lane  H.S. Tibbs Minutes by A.T.  Lane
Length of ride: 20 km
Map of ride
Photographs
After much discussion about various bike stuff, we headed out.  Took a few photos of the MAA building, then we had lunch rather than continue on to the Olympic Stadium.
17 March Tour of MAAA Grounds

Present :   A.T. Lane  H.S. Tibbs, Louis Rubenstein Minutes by A.T.  Lane
Length of ride: 8 km
Map of ride
The members met as usual at the Shaika Cafe.  After some discussion, it was decided that the upcoming spring excursion will be from Washington DC to Atlantic City NJ.  There was also discussion about the WHA presentation, and what form the conclusions of the talk should take.  The third topic of discussion was the possibility of having a Fixture ride of Montreal's 19th century cycling sites, and what it could include. 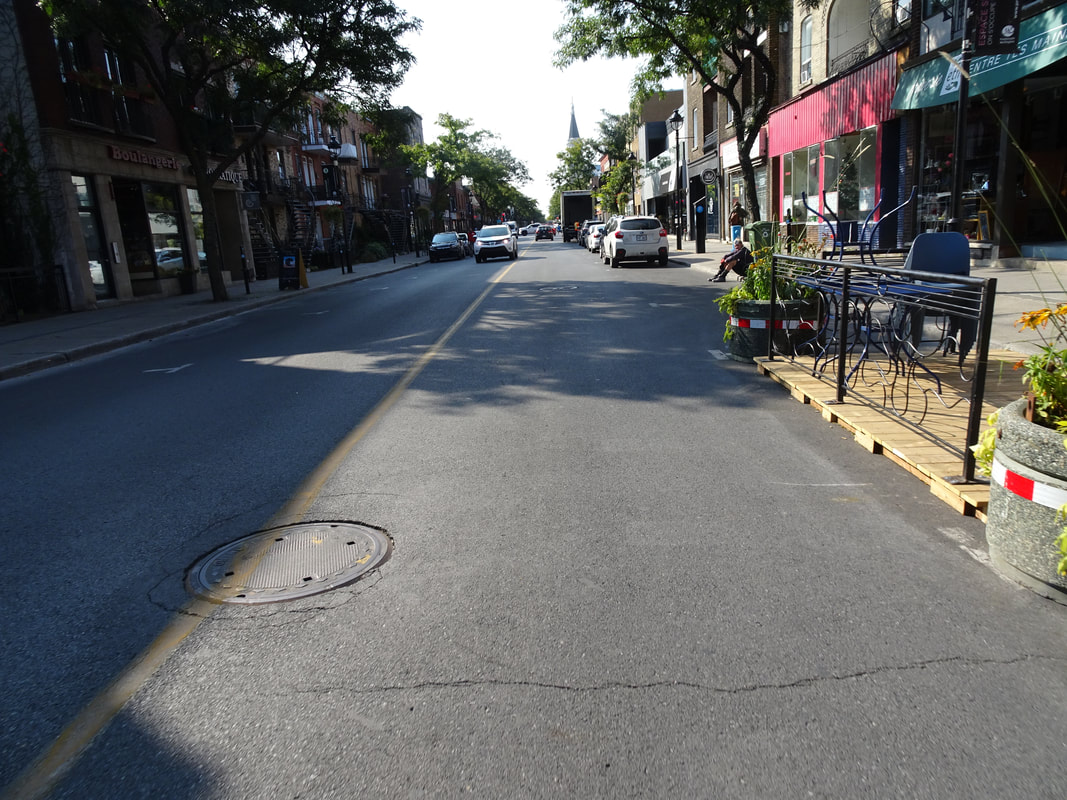 20 March Ride Around the Mountain

Present :   A.T. Lane  H.S. Tibbs, Louis Rubenstein Minutes by A.T.  Lane
Length of ride: 21 km
Map of ride
A productive day and ride was had.  After discussion at the Shaika A.T. & Tibby, headed out to the Jewish Public Library where they scouted out potential new leads about Louis.  This was followed a chance meeting with a second potential lead at Concordia University.  A descendant of the first Wheelman to take a High Wheel from Montreal to Albany NY!  All in the hope of getting a new library card! 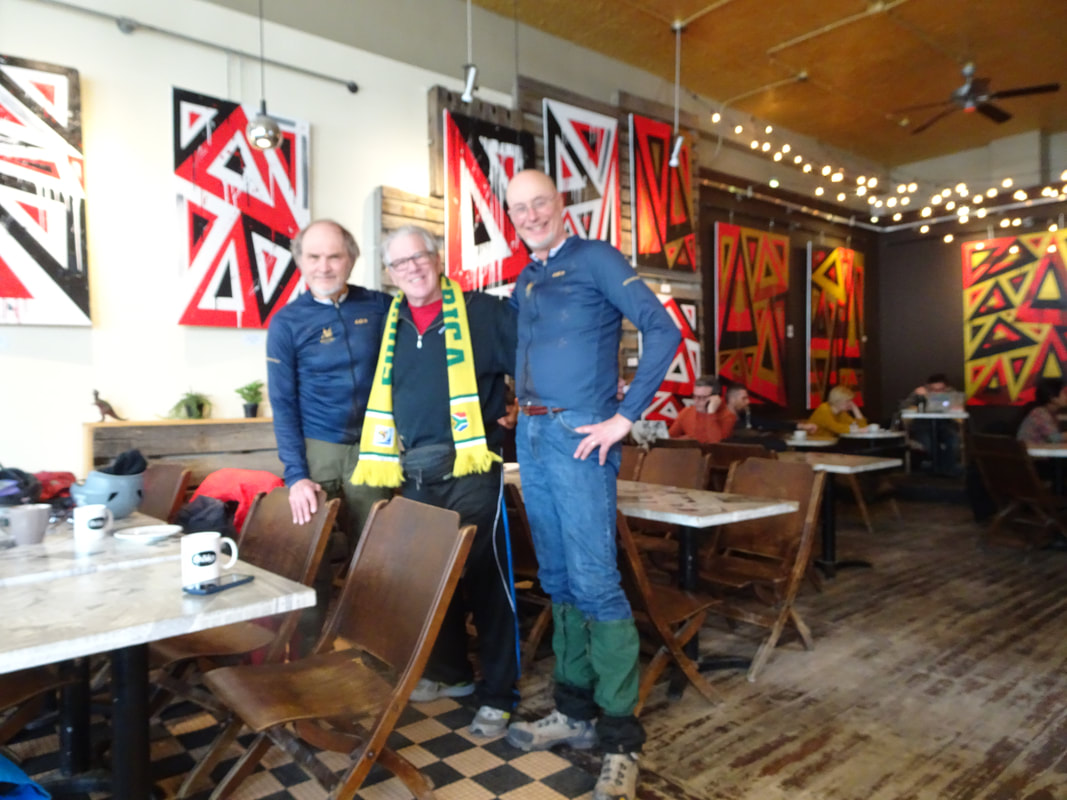 Present :   A.T. Lane  H.S. Tibbs, Louis Rubenstein & Kent Minutes by A.T.  Lane
Length of ride: 29 km
Photographs
Map of ride
After discussion at the Shaika the four members, headed out to Dumoulin Bicyclettes  to check out renting folding bicycles for the upcoming Washington DC excursion.  Along the way they took some pictures  of new bicycle path curbing on Clark noting that the bump out in the sidewalk had been removed.
30 March Westmount Earth Hour

Good discussions generated about the Sherbrooke Street bike path, along with music from pipe band.