Present :   A.T. Lane, G. T. Bishop, & Henry Strumey Minutes by A.T.  Lane
Length of ride: 50 km
Photographs
Map of ride
The Tour de l'Île is a very popular ride in Montreal and always attracts a huge crowd, even when rain is forecast.  Henry Strumey and A.T. Lane managed to hook up before funneling through the starting gate, G.T. Bishop was somewhere else in the crowd.
The two able to keep together by finding distinctive hair styles to follow.  However this only worked for a while and they became separated.
One nice thing about the Tour de l'Île is the people who cheer you on.  Sometimes in the rain however they seem to find strategic overpasses near the mileage markers to stand under.
Didn't stick around much at the finish but headed home for a warm shower.
4 June Train Museum

Present :   A.T. Lane, G. T. Bishop, Louis Rubenstein & Henry Strumey Minutes by John James Henry Strumey
Length of ride: 42 km
Photographs
Map of ride
The June 4 meeting of the Montreal Bicycle Club comprised taking the Montreal EXO train from Vendome station to Cote St Catherine thence a cycle to St Constant and a tour of the Railway museum thence a cycle to the Restaurant at the Seaway Park in Cote St Catherine…a vigorous cycle along the seaway causeway..a headwind push across the Ice Bridge thence to Atwater Market where the meeting adjourned and the participants went their separate ways…Westmount for the thespian, the Plateau for the river boat captain, NDG for the smooth talking stock broker and Lachine for the rocket scientist. 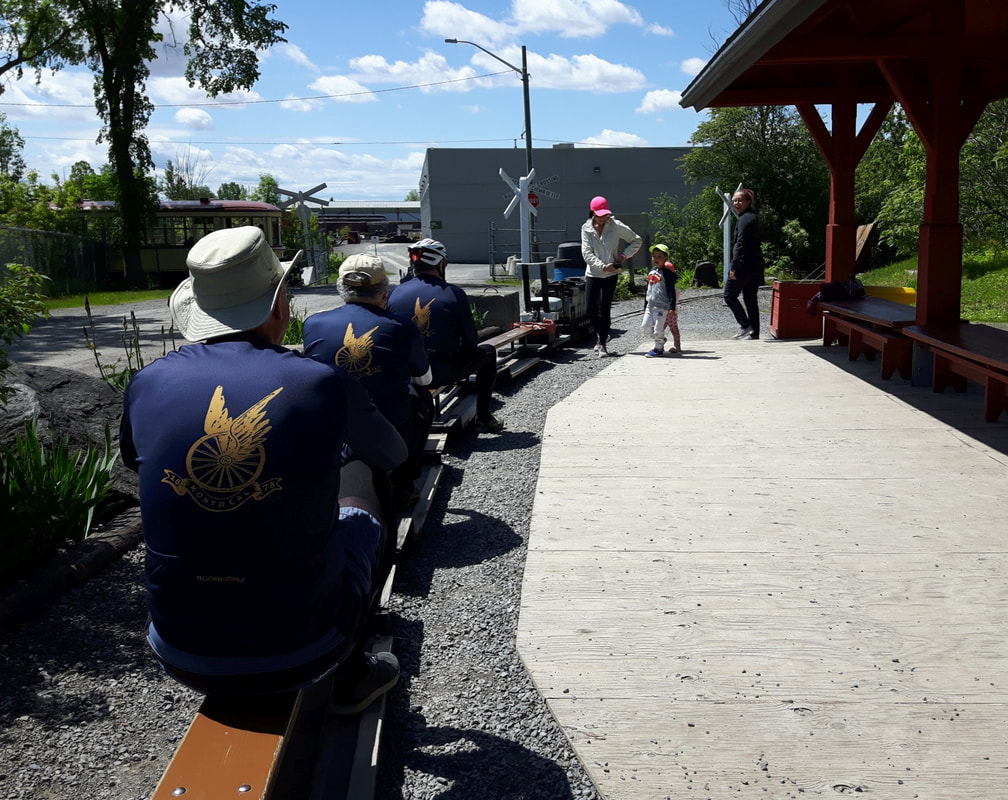 Wee Wheelmen
We observed many interesting aspects of the Canadian Railway history…the scenic rail carriage that would take you around Montreals 2 mountains (Westmount and Mt Royal) for 50 cents…this is the same route taken by the MBC referred to as the Twin Peaks ride. We had a terrific history lesson while on the “electric tram/trolley” by a master story teller who knew which cars ran on which lines in Montreal and why..we marvelled at the engine room of a classic steam engine..watched a video of the big rotary snow plow in action as it cleared the pass in the Rockies..we took a ride on the miniature railway complete with treacle bridges and tunnels. All in all a really interesting visit.. I have lined my grandson up, who loves Thomas the train, for a visit.

The seaway park was not yet completely operational it being early June but was very popular with several groups of “vintage” cyclists enjoying the area. The restaurant was not open, apparently there were preparing for a special event…that did not include us. Regrettably the “smooth talking Stock Broker” did not notice the others having a mini lunch break and rode off into the sunset ahead of us…not to be seen again.. we assume he got home ok..the ride on the seaway causeway was pleasant with a nice following wind and the bugs were just making their presence felt…The Ice Bridge provided a stiff headwind for the 2.5 km stretch across the St Lawrence. As noted above the meeting was adjourned and the participants went madly off in several directions.

I imagine you all must have laid awake last night but I managed to grab a branch after I fell in. The water was very rough and cold but I eventually got ashore. 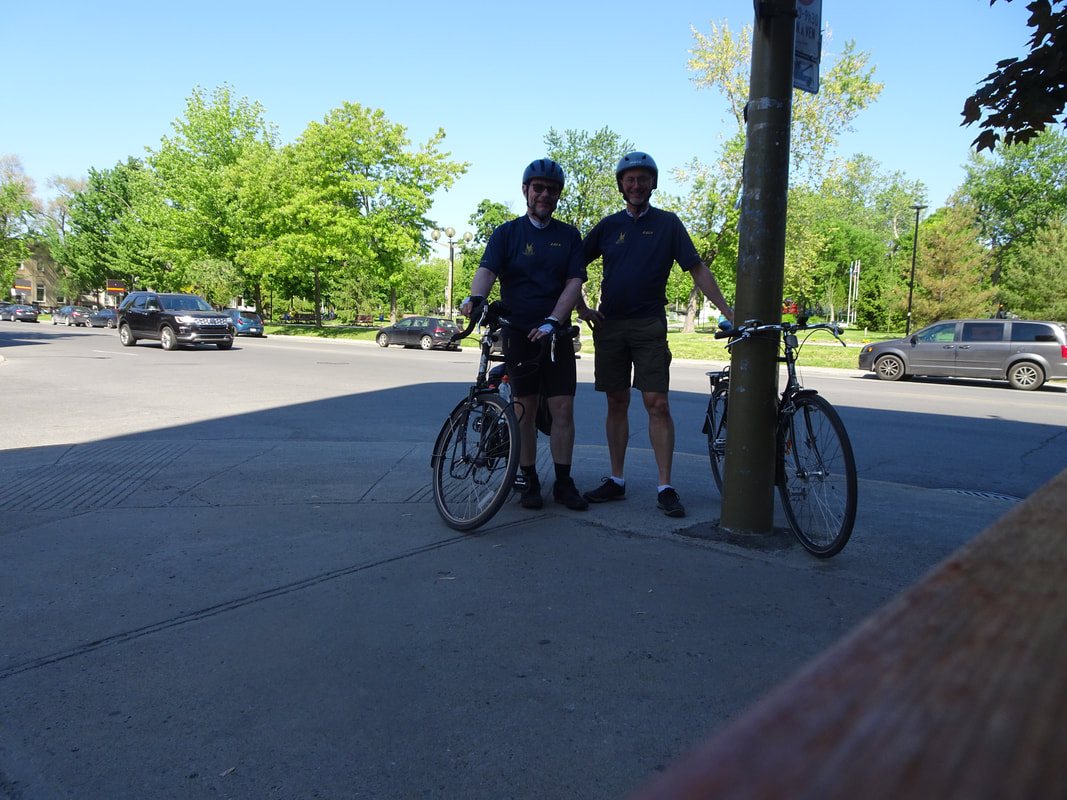 After meeting at the Shaika Cafe the members searched out MIA cards on Sherbrooke street and then bought some tickets to the Fringe Festival.
11 June Sauvons la Falaise


Present :   A.T. Lane, H.S. Tibbs, Louis Rubenstein, Kent & Pascal Minutes by A.T. Lane
Length of walk: 5 km
Photographs
Map of ride
After meeting across from the hole in the fence, the members headed out to the Falaise to inspect the paths and do some photo-mapping.  A.T. Lane later learned that the camera has to have the GPS-REC switch on as well as GPS switch on in order to save the locations.
13 June Technoparc


Present :   A.T. Lane, H.S. Tibbs, Louis Rubenstein, G.T Bishop & Alice Hawkins Minutes by H.S. Tibbs
Length of ride : 62 km
Photographs
Map of ride
Having convened at ShaÏka café and opined on many of the issues of the day, a quorum of five set out for Techno Park.   The route was westwards along the de Maisonneuve cycle path, down Devil’s hill, into Lachine by the back door, and down to the canal head.   Water levels were surprisingly still very high.   Continuing westwards along the water’s edge we were sailed along by a strong south-east wind which riled lac St Louis into a broad choppy basin of whitecaps.   These brown flood waters of the Ottawa in places were driven by the wind into a  spray across the road.
Lunch was enjoyed in Pointe Claire at an outdoor café.   We then made our way through the garden suburbs of the West Island to the other side of  the 20 by way of a tunnel at the Cedar Point train station.   We approached Techno Park from the west side of Dorval airport.   An attempt was made to short cut across the Dorval golf course.   Part of our contingent almost made it to the fence.   We regrouped and went around the golf course to the north by way of Aviation Boulevard.   It led to St Francois and the trail entries to Techno Park.   We took the trail that led into a beautiful mature forest of maple and beech but were annoyed by a swarm of mosquitoes.   Returning to the start, Sharon and Tibbs  took another trail into the Park that led to open prairie and grasslands and finally the long pond.    Being more open the winds blew the mosquitoes away.

The return to the city centre was trying.   The amount of traffic, the incomplete cycle path network, wind gusts, all contributed to making it difficult.    A pleasant surprise was meeting Dara along Alexis Nihon boulevard.   We were all relieved to  reach NDG where we cycled on quiet residential streets.   The quorum dispersed, as is its wont, at various points nearer their homes.   It was a good ride.


Present :   A.T. Lane, H.S. Tibbs, Minutes by A.T. Lane & H.S. Tibbs
Length of ride : 85 km
Photographs
Map of ride
A.T. Lanes' version of the Minutes
After taking the train to St Jerome, and a hearty breakfast, the members headed north on the trail.
Taking note of the local flora and fauna.
As always, we also took note of how bicycles fit into all this.
Trying to find the best places to eat, or what to eat.
Held up by traffic on the return trip, we narrowly missed the train home and had to read a newspaper as we waited for the next one.
H.S Tibbs version of the Minutes
A..T. and Tibbs were the only riders on the classic St Jerome to Val David cycling day-out.    It was a beauty.   Perfect cycling temperature, 24 C, slight breeze, and occasional cloud cover made for a relatively easy climb up into the Laurentians.    The Rivière du Nord had great flow, high water levels, fantastic sight.

We had a light breakfast at the café facing the old train station in St Jerome, excellent croissant.    At the turn-around point in Val David we had a tasty lunch in the  Le Général Café.   We were having such a good time jabber-wocking on our return to St Jerome that we missed our train back to Montreal  by a minute.   So we spent an extra two hours in St Jerome next to the city centre space at the portal to the Petit Train du Nord discussing AI while listening to two young composers playing piano three hand in a Philip Glass style.

The train back had a little detour in that we were asked to de-train at Parc and take the métro from there because of a fire near the tracks between Parc and Montreal West.    So it was quite a day, almost too much of a good thing.

Present :   A.T. Lane, G. T. Bishop, Louis Rubenstein, W.G. Ross & FOGBEE's Minutes by A.T. Lane
Length of ride: 30 km
FOGBEE account of the ride
Photographs
Map of ride
A great day spent riding in the rain and chatting over coffee with the FOGBEEs, who were on a cycling tour around Lake Champlain and spent some time in Montreal.  Probably best described here.
22 June Îles-de-Boucherville

The members met at the Shaika Cafe at 8:00 am, before the Cafe opens, in order to be certain of catching the ferry.   On the way they passed by the new bike light on Claremont.  You can sense the feeling of accomplishment as H.S. Tibbs passes by.
Thanks to the early start, everyone was on time for the ferry from Montreal to Les Îles-de-Boucherville.   Once on board however we learned that due to high water, no ferry would be running from Les Îles-de-Boucherville to the South Shore that day.  The member's spirits seemed unaffected however.
Once on the islands, we noticed the new connecting bridges and the fact the inter island ferry is still operating beside the bridge.  Later we at lunch at the Long House, then took note of the effect the high water was having on the South Shore ferry service.
Riding back along the trails and bridges on the islands, we returned by ferry to Montreal.
Resolving to make a loop return, we discovered a new (to us) bicycle path north of the earlier route.  The members broke up as they do at the end of each ride with everyone choosing a different path home.
26 June Oka Ferry

Present :   A.T. Lane, Louis, & W.G. Ross Minutes by A.T. Lane
Length of ride: 83 km
Photographs
Map of ride
Meeting at Gare Centrale, the members boarded the train to Deux Montagnes before setting out on the trail to Oka.  They discussed the transportation news that morning about  plans to add a dedicated Via Rail route between Quebec City and Toronto as well as how the Mont Royal tunnel would be affected by that and the REM.  Some of the best  comments on this can be found on Anton Dubrau's blog or the Trainsparence website.
We stopped for a lunch break and a few photos at Oka parc.
The higher water levels around Montreal have resulted in a late starting date for the 2019 season of all the ferries in the region as well as changes to the ramps that access them.
As always, we took note of how bike paths and were constructed as well as anything else of interest.
That same day, it was announced that a new streetcar  route from Lachine to Downtown is being planned as well being the day the pedelec electric  Jump bikes from UBER became available in Montreal.  It seems there are a lot of changes happening to the transportation around Montreal.  I hope the city maintains or improves it's standing as one of the best  to cycle in.
29 June Île Bizard

Present :   A.T. Lane,  W.G. Ross, Louis Rubenstein, Karl Kron & Isabelle Minutes by A.T. Lane
Length of ride: 97 km
Photographs
Map of ride
Cafe   The members met at the Shaika then headed north, negotiating the "Nasty Bits"  near the Decarie Expressway and the Trans Canada Highway.  One of the less commented upon regions of Montreal's top 20 position as the best cycling cities in the world.
It's not all "nasty" however, some parts are quite pleasant.
And the " bicycle path"  over Autoroute 13 is laughably bad.
At least the Gelato and cold drinks were good.
Not much of a wait for the ferry to Île Bizard.
The water was still to high to cycle through Parc Île Bizard.
But we continued on to have lunch at Ste Anne de Bellevue and then rode home to Montreal.