Present : A.T. Lane, Louis Rubenstein & G.T. Bishop  Minutes by A.T. Lane
Distance cycled 45 km
Route
After taking the VIA train to Rivière-à-Pierre the members took a quick tour of the town, famous for its granite, before heading out on the trail.
The trail ( Vélopiste Jacques-Cartier/Portneuf ) follows a former rail line, passes through a forested area to St Raymond was in a very well kept condition and has many impressive former rail bridges along the way.
We spent the night at the Hotel Rouquemont and micro brewery in St Raymond which seemed to specialize in catering to Mountain Bike Tourists using the nearby trails.
12 September St Raymond to Quebec City

Present : A.T. Lane, Louis Rubenstein & G.T. Bishop  Minutes by A.T. Lane
Distance cycled 70 km
Route
In the morning we rode by the town of St Raymond, with A.T. pointing out highlights of last year's trip on the 8th of June.  They continued to Lac St Joseph where they stopped for lunch. 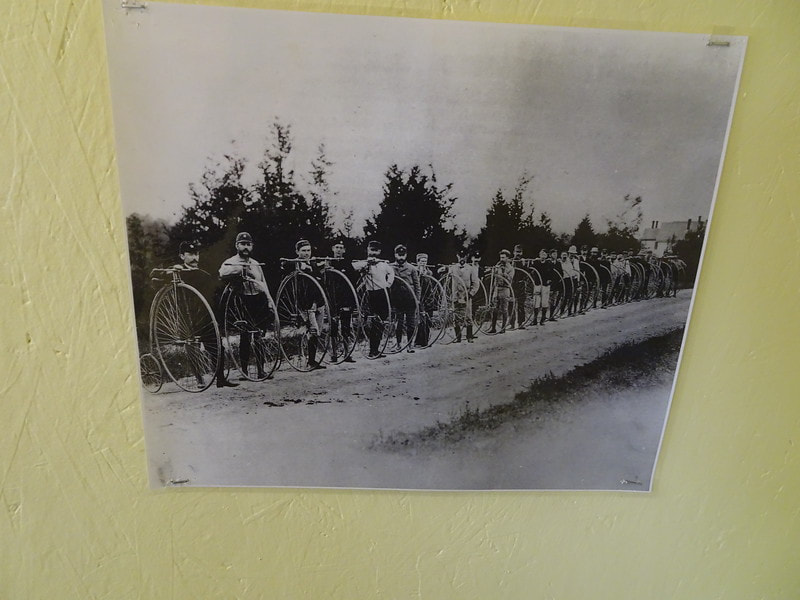 Just east of the turn off to Lac St Joseph is a remarkable rest stop for cyclists that a home owner has built in his backyard.  The Vélo Station Halte bouffe et mécanique has a bike shop. tools, water and a cycle themed WC.  That even includes a photograph of Charles Pratt and Colonel Pope.  Pratt ( leftmost in picture, and founder of the Boston Bicycle Club) wrote a letter to the early Montreal Bicycle Club congratulating its founding which was received 16th January 1879.

Continuing on the trail into Quebec City limits, the group stopped in  Wendake and visited the First Nations Hotel and Museum  located right beside the bike path for supper and a visit to the fascinating museum.
13 September Quebec City Tour

Present : A.T. Lane, Louis Rubenstein & G.T. Bishop  Minutes by A.T. Lane
Distance cycled 40 km
Route
The following day in Quebec City we watched the start of the Grand Prix de Cyclistes Quebec. Afterwards we started our tour of the city  at the DufferinTerrace and proceeded up the stairs along the Promenade des Gouverneurs.
Seeing more laps of the race, we headed out to the Quebec Bridge, then stopped for lunch at a bicycle themed cafe in Levis.
Taking the ferry back to Quebec City, we just managed to see the last lap of the race before taking the train to Montreal.