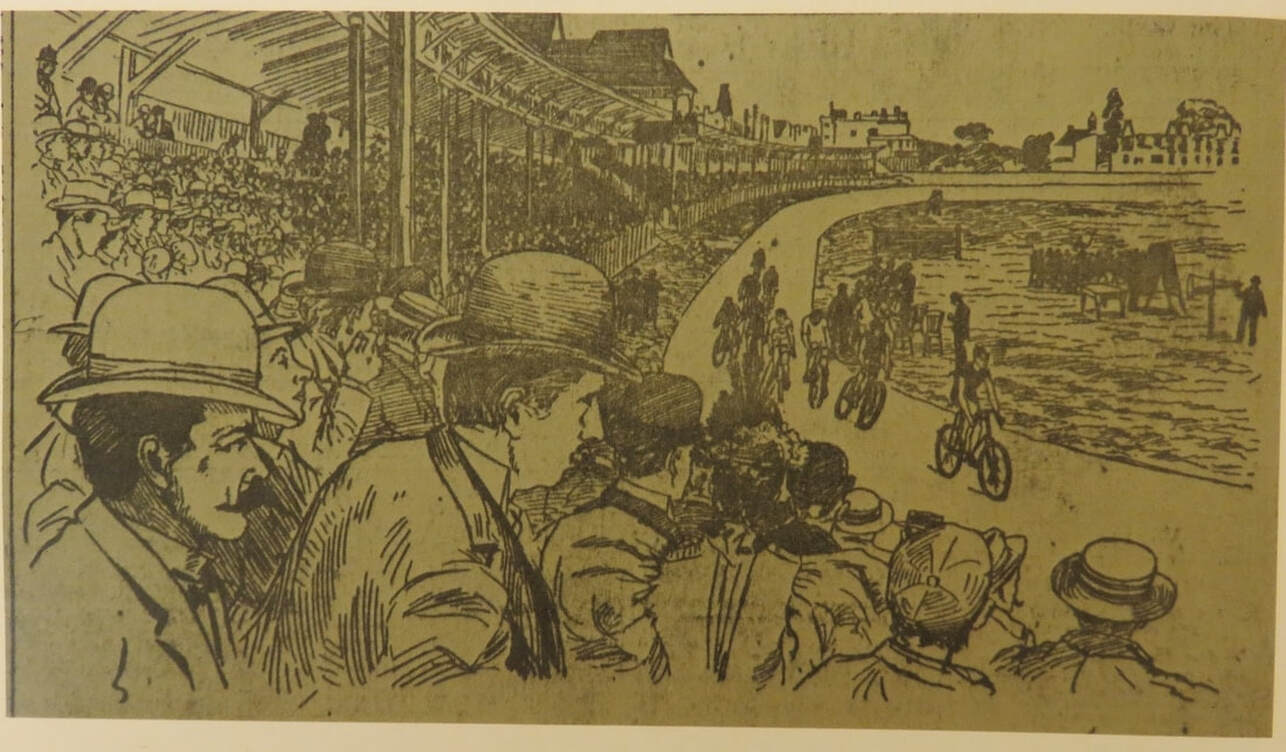 "The acquisition and construction of the Westmount Grounds proved timely and advantageous to the M.B.C.. Refined by additions and changes in the 1890's, the completed Grounds facility was an outstanding sporting venue that reflected the organization and attention to detail given to all aspects of the M.A.A.A.'s sporting regime.  The playing field, 600 feet by 430 feet, was underlaid by 600 yards of drainage tile and surrounded by a third-of-mile cinder track, eighteen feet wide for half its length and twelve feet for the remainder.  For the benefit of cycle racing, all curves were banked--which must have decreased the times of runners in any event over 220 yards.  In the very centre of the playing field was a cricket crease, measuring 90 feet by 160 feet, to be used only for matches. At the eastern edge of the Grounds were seven lawn tennis courts, two dirt tennis courts and a practice cricket crease.  Water pipes along the inside edge of the tracks, with connecting hose, allowed the grass to be kept in first class condition.
There were three full time groundskeepers, uniformly dressed and wearing the whinged wheel crest.  The perimeter of the Grounds on the east, west and south sides was marked by a eight foot planed and grooved pine fence.  The Grandstand ran the entire north length of the field and backed onto Ste Catherine Street.  It was divided into seven tiers of 18-inch-wide seats accessible only form the back of the grandstand.  In the centre of the grandstand was the "Directors' Pavilion", slightly elevated from the seats on the east and west sides of the grandstand. Some 600 seats in the Directors' Pavilion were given over to reserved and advance-sale seats for members,  the press, ladies, and officers of the Association. Beneath the pavilion were two large dressing rooms for the athletes.  A roof over the entire grandstand was supported at the front by narrow iron posts, in an effort to give spectators the clearest view possible of the track and playing field.
Seated in the stands, spectators looked south over the St Lawrence, with the celebrated Lachine Rapids to the wet and the renowned Victoria Bridge a little to the east.  The only access to the Grounds was via the Grounds was via the Grounds clubhouse fronting on Ste Catherine Street. This clubhouse contained small dressing rooms, a reception room, four "shower baths", a lavatory and to ticket booths on the first floor.  The second floor was fitted up as a "music hall" or auditorium, complete with stage, for large receptions and for rental to outside agencies such as church congregations.  Above the second floor were the caretakers quarters. Since fire was the greatest threat face by the M.A.A.A., the grounds were insured for the full value of $25,000 and the entire facility was dotted with water barrels, water buckets, ladders, axes, pike staffs and fire extinguishers.
Compared to the facilities of the New York Athletic Club, the M.A.A.A. property was not lavish. It was functional and completely suited to all the M.A.A.A. outdoor activities. Certainly it was everything the Montreal Bicycle Club could want: distances were marked along the inside edge of the track by bronze plaques; an electric timer was capable of recording lap times  and all finishing times; a huge megaphone supporte4d by a tripod was used by announcers to inform the spectators of various aspects of the races; and the track was constantly rolled and kept level by the groundskeepers." 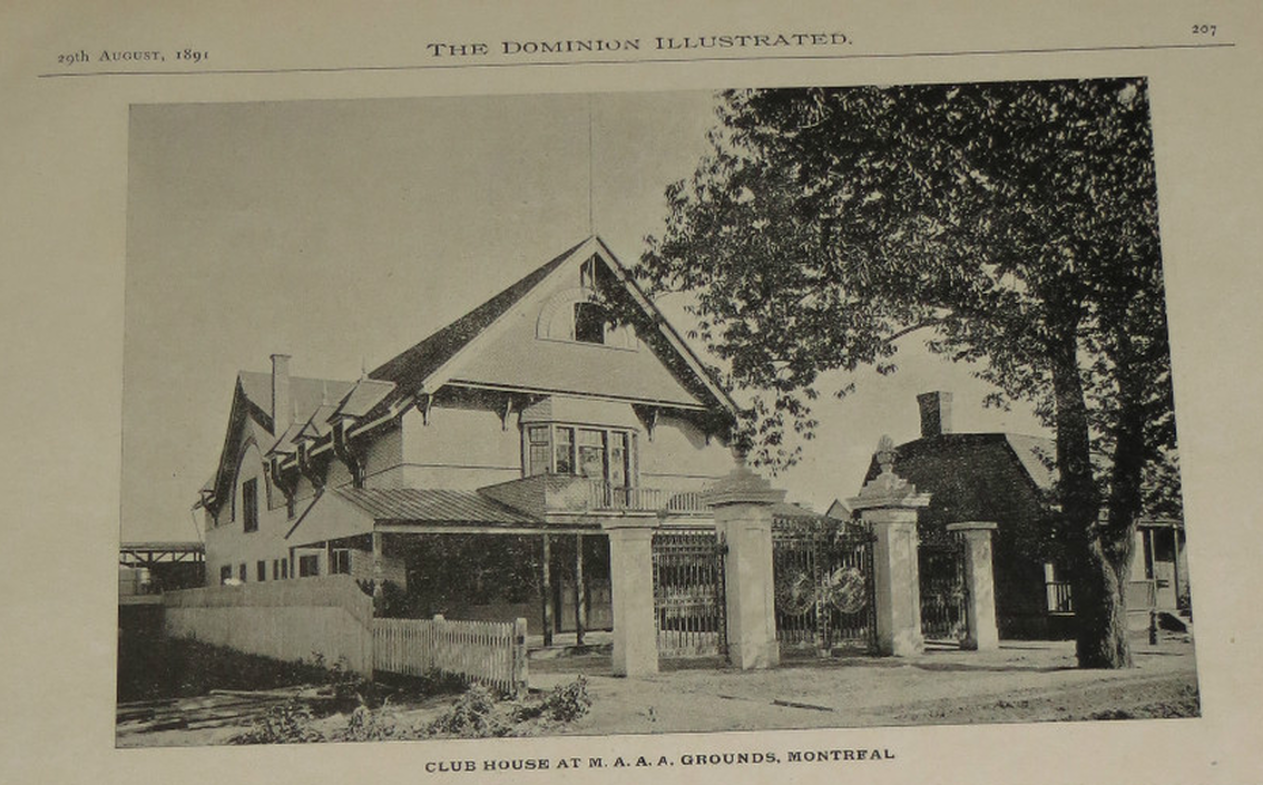 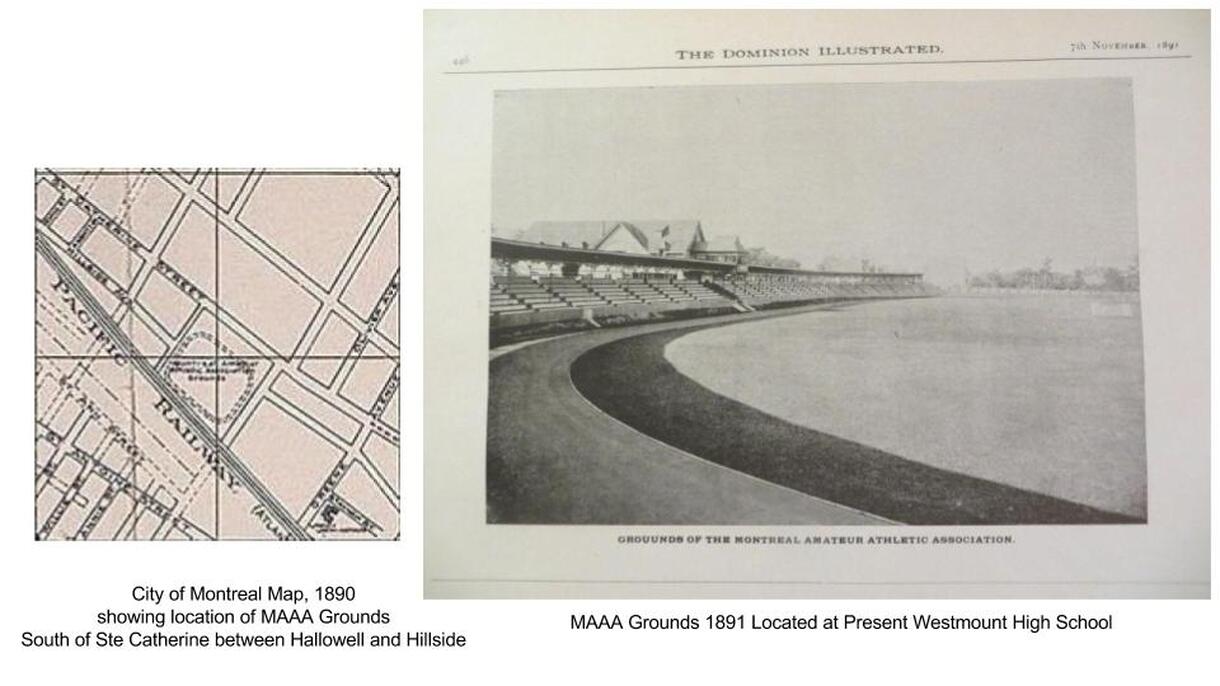 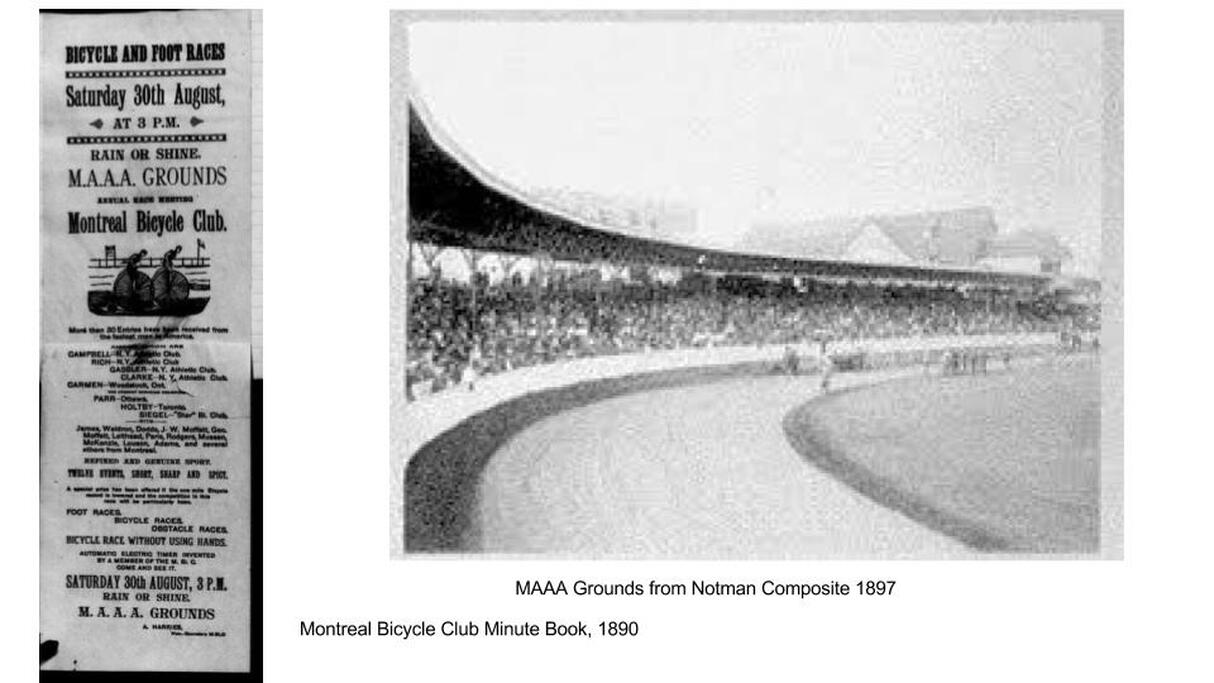 "Traditionally, the M.B.C. held annual races varying in distance from half a mile to five miles, including  a half-mile dash on high wheelers without hands.  To promote interest in competitive cycling, the M.B.C. conducted frequent handicap races, giving less skilled cyclists a chance to compete with more established racers and providing a worthwhile challenge to experienced competitors. The annual reports of the M.B.C. became lengthy catalogues of race victories, mileage accumulated by members of the rides, membership attendance, record times, prizes awarded and non cycling events undertaken by the club. In the later category were such off season adventures as six man bugler bands, euchre competitions,m "smoking concerts" where members sang and recited, cake-walks and member competitions in hockey or basketball.  The vitality and energy exemplified by the M.B.C. during the 1890's was reminiscent of the same qualities in the previous decade of the M.A.A.A. lacrosse and snowshoe clubs.
Occasionally the M.B.C. staged "fancy dress parades" in which the cyclists would wear an assortment of costumes and ride through downtown Montreal.  When the city attempted to reap a cash benefit from the cycle craze by charging a five-dollar bicycle tax, the M.B.C. called a mass meeting of Montreal wheelmen and had the tax reduced to two dollars" 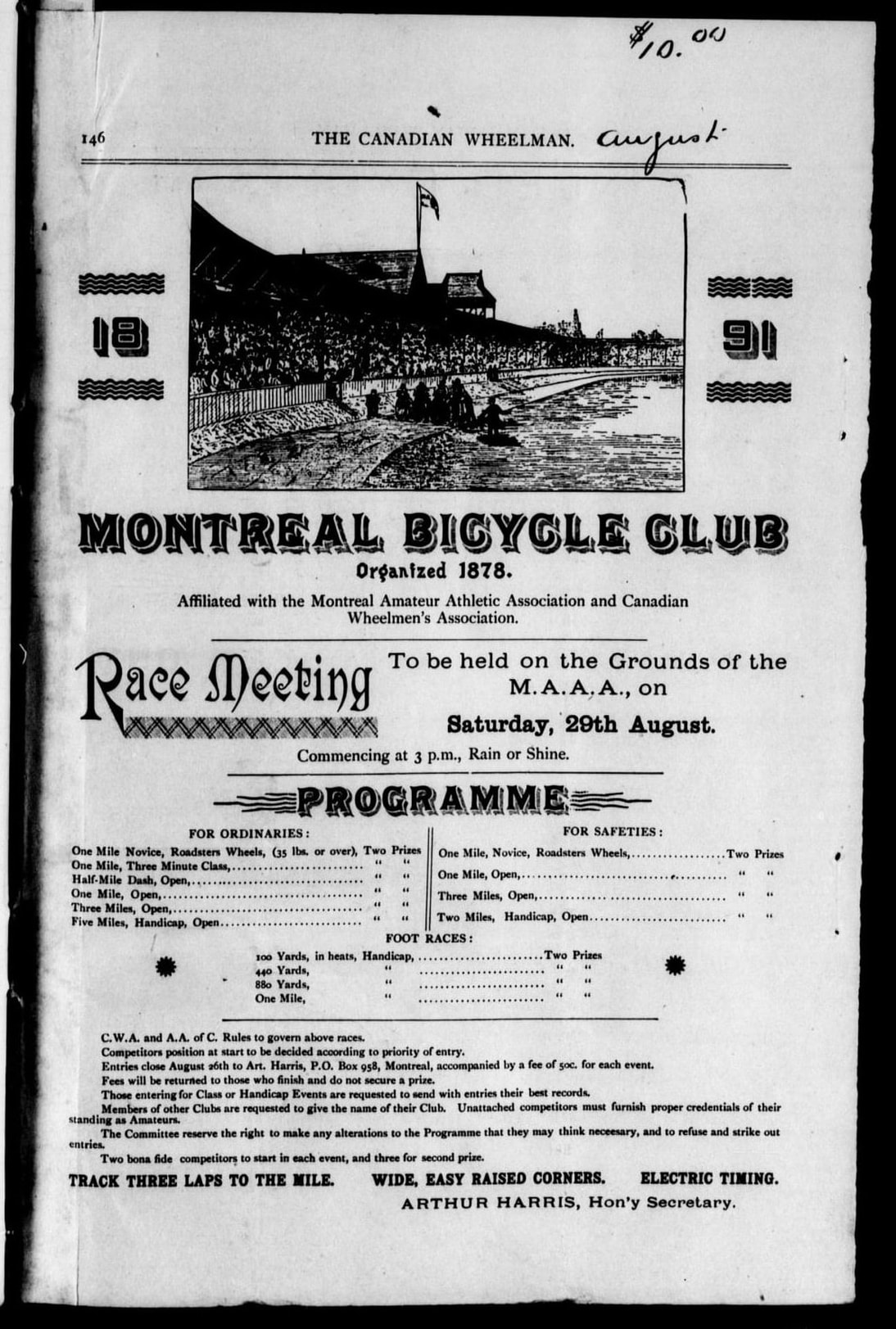 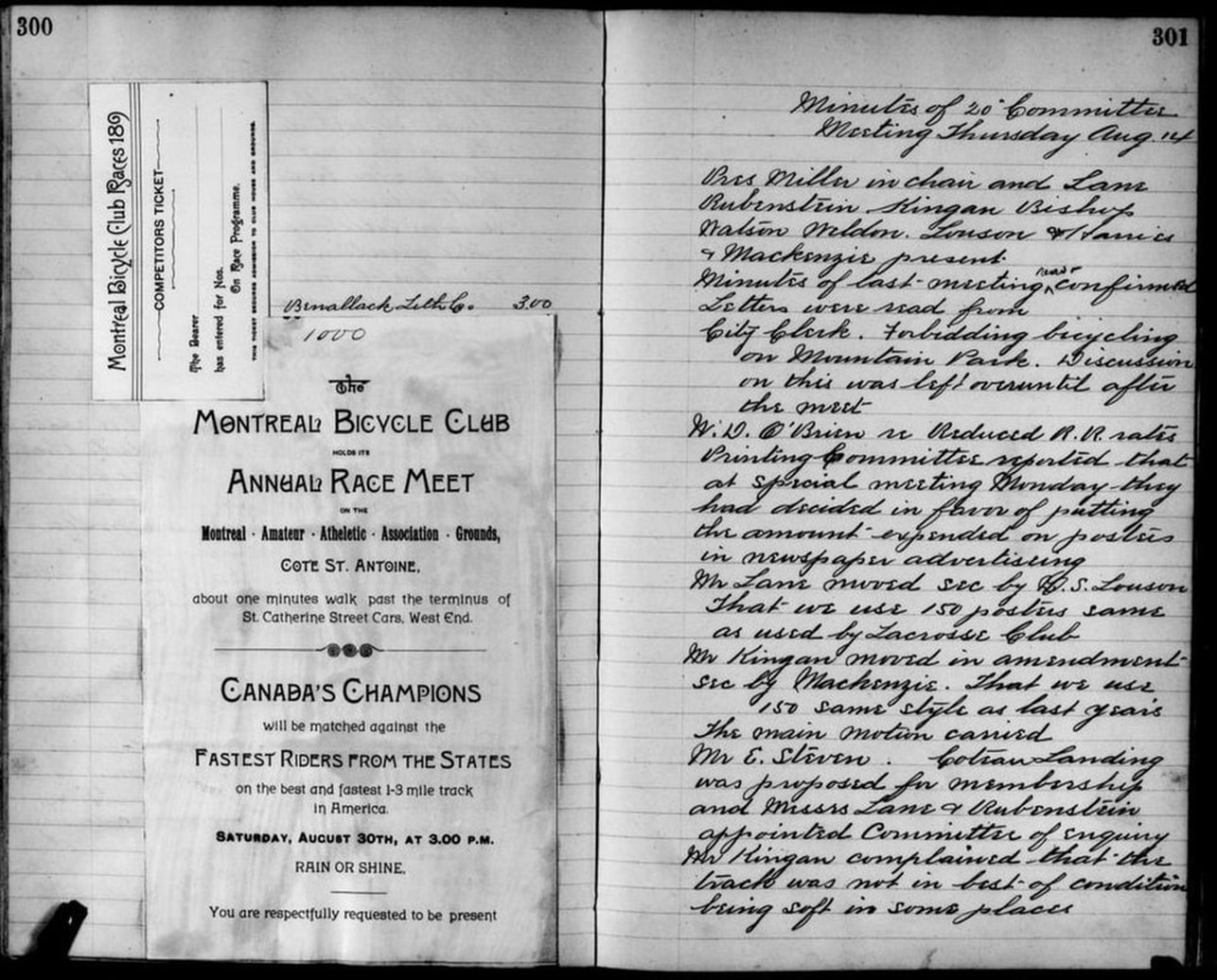 The Westmount Historical Association has a webpage devoted to the Westmount Athletic Grounds (the former MAAA Gorunds).
https://westmounthistorical.org/wag-athletic-grounds-since-1887/ 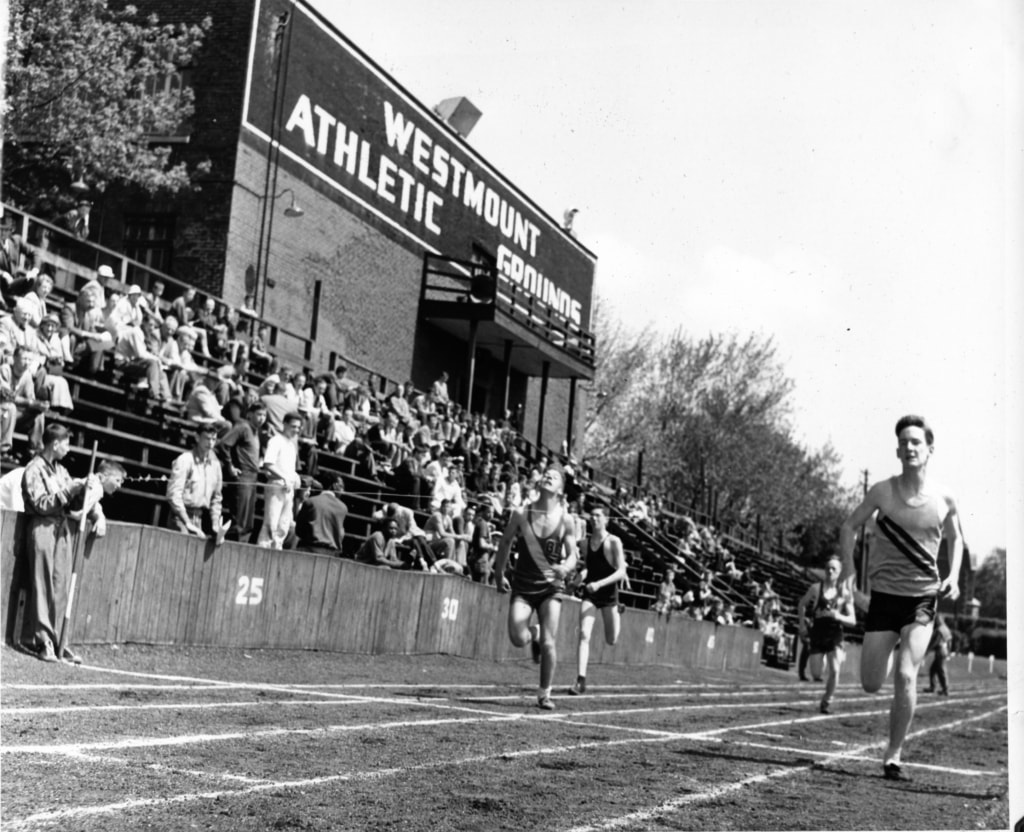