2 May Fixture Ride to Olympic Village and Maisonneuve Park

Two new Sobriquets were added to the club roster, Henry Strumey and W.G. Ross.  Welcome Aboard!!   In addition booklets for  the Veloroute du  Fjord du Saguenay were handed out so we can start planning an excursion to that region.
yThe May 2 meeting of the Montreal Bicycle Club was held at the club meeting hall the Shaika cafe in NDG.

Members drifted in from 9 to 9:30 while old acquaintances were renewed, new members acknowledged and stories of recent adventures to Washington were
refreshed and recounted.  With five members ‘coffeed’and ‘croissanted’, our leader welcomed us all (A.T. Lane, H.S. Tibbs. Louis Rubenstein,  W.G. Ross and J.J. Henry Strumey. A.T.  spoke briefly of the planning for a trip across the Northern New Brunswick from Campbellton to Edmunston then on to Riviere de Loup  via the  Petit Témis. The next topic was a suggestion that a tour of Lac St Jean be considered with some side explorations of the Saguenay river and whale watching at Tadoussac. He produced a comprehensive cycling guide of the region. The newest member W.G. Ross was fitted with he team colours...we started our journey at about 9:30..Our leader proposed the following “sobriquets” for Bill, J.J. Henry Sturmey (of Sturmey-Archer fame) and for Ian-2 W.G. Ross (a well medaled cycle champion of 1882).

The journey an overview..The Olympic Stadium was targeted as a destination with the routing subject to the usual preferences, discussion, debate and direction. We headed off along the de Maisonneuve bike path east to the Stadium...the following stops and highlights are to be noted. Photos were compliments of A.T.'s delight in using his voice activated Go-Pro camera.
1-The weather started out a bit brisk with suggestions it may get warmer or perhaps some rain...but defiantly some wind...which increased to about 15 km from the northwest slowing the trip home a bit.
2-The de Maisonneuve Bike path is not the speediest route across town with several stop signs and stop lights, however it provided the opportunity to take in the signs of spring and the aromas of a city getting ready for the 10 am coffee break..with fresh roasted coffee and croissants being prepared at the many cafes along the route.
3-Our first cultural stop was the Quartier Spectacles where we admired the new edifice Wilder, the new home of Les Grands Ballets Canadiens. Tibby provided some details on the structure as it had recently been featured in a Canadian architectural journal...after some discussion and some consultation we determined that the multi-
faceted structure beside it was the soon to be new home of the National Film Board.. impressed we ventured on.
4-Continuing on de Maisonneuve with some lefts and rights we happened upon the renovated/gentrified Angus yards complex historically significant as the location of the CP steam engine repair works...the complex has many housing developments and a burgeoning restaurant and shopping areas.
5-Next stop was past the Botanical Gardens to the Olympic Village...an impressive housing complex a hold over from the ’76 Olympics...we toured the mezzanine area but chose not to ascend to get a view of the city.
6-after some negotiations and discussions we decide to tour Maisonneuve Park, stop in the Angus yards to re-fuel and head back home via the north side of the mountain thru Outremont...our route took us along a bike/walking path adjacent to the CP rail lines thru Mile End, Rosemount and the lunch crowd along St Viateur..Tibby decided to stay about south and went of the mountain. the remaining 4 took Louis's much preferred Cote St Catherine route...requiring a bit of a climb into the wind but resulting in a pleasant downhill coast back to the head office. Louis split off at Decarie, while A.T. headed east off of Girourard...W.G Ross and the writer parted company at Sherbrooke with W.G. continuing south home.

Louis and A.T. met at the Shaika cafe to discuss commercial aspects of the recent excursion to the GAP C&O excursion then headed out towards the West Island.  Louis had to return early to take care of the dog and took the opportunity to show A.T. a little known entrance to both the Dorval VIA rail station and AMT station.
A.T. continued on to Pointe Claire and had lunch with his long time business associate James Starley, from whom he had first imported a high wheel Coventry bicycle to Montreal in 1874.  They discussed the terms of membership in the Montreal Bicycle Club, more recent news such as the Banker's Plot of 1933, and technical issues of web design.
One new Sobriquet was added to the club roster, the above mentioned James Starley.  Welcome Aboard!! 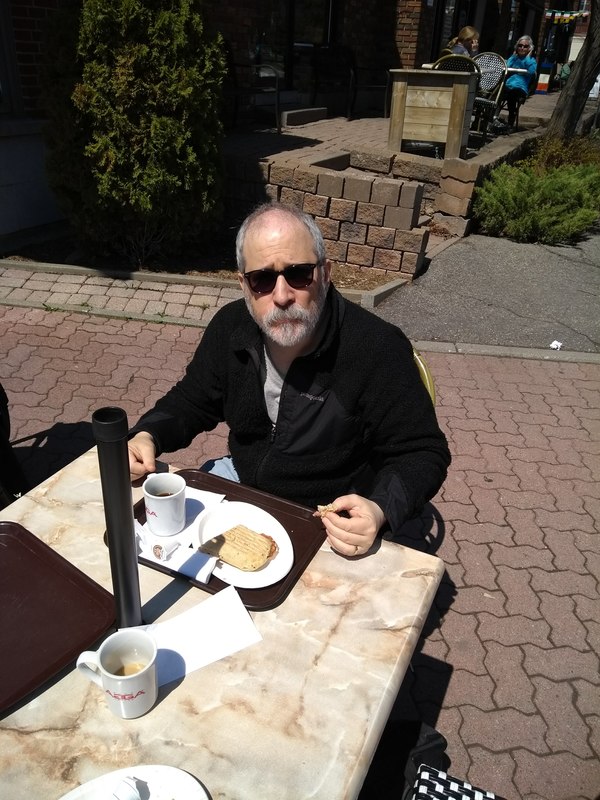 9 May Fixture Ride to Oka Ferry

Present : H.S Tibbs, Louis Rubenstein, Annie Londonderry, Dorthy Cole & A.T. Lane  Minutes by A.T. Lane
Length of ride: 83 km
Map of ride
The members met at the Town of Mont Royal station for the train to Deux Montages. They then headed out towards Oka.  On reaching the Parc they took a side trip to the lookout over the Grande Baie, enjoying the bird sounds  and wildlife.  They proceeded on to the Oka ferry and stopped for lunch at the Willows. Riding back to Montreal through Ile Perot and the west Isalnd to Pte Claire. The group then split up with some taking a train the rest of the way and some continuing on bicycle.
12 May Fixture Ride to Cap-Saint-Jacques

One new Sobriquet was added to the club roster, the above noted Alice Hawkins.  Welcome Aboard!!
After meeting at the Vendome station the members took the train to Ste Anne where there was a outdoor market and they all stopped for coffee.  Riding over to Cap-St-Jacques, they posed for pictures and investigated Hobbit houses.  Continuing on they encountered long stretches of busy automotive roads, however fortunately there was a bike path alongside.  Eventually it was again wooded park land, the  Parc Nature Bois-de-Liesse. The western portion, known as the Bois Francs, refers to the old black maples which are a big feature of that park. Here the trilliums were very abundant.  A short portage through the back river under highway 13 was followed by a return to Montreal via the Metro for some and TMR for the rest.

After meeting at the Town of Mont Royal station the members took the train to Deux-Montagnes. It was the first time A.T. had used the folding bicycle on a Fixture ride and he was anxious to see how it felt.  They took the ferry to  Île-Bizard from Laval-sur-le-Lac and rode through the nature park Bois-de-l'Île-Bizard.  Part of the trail was closed so they had to double back and re-enter from a second entrance.

They then continued on to Ste Anne.  Tibby returned by bicycle from Ste Anne, Louis visited friends in the West Island, and  A.T. took the train back to Montreal after having lunch in Ste Anne with Tibby.  The folding bicycle passed it's test with flying colours.
23 May Fixture Ride to RécréoParc

Present : H.S Tibbs, Annie Londonderry, Karl Kron & A.T. Lane  Minutes by A.T. Lane
Length of ride: 55 km
Map of ride (Partial)
The members arrived at Vendome Station but due to confusion about how to use the ticket machines missed the train to St Constant and the Train Museum.  They quickly decided to ride to the RécréoParc on the south side of the Lachine Rapids instead.
After crossing the Ice Bridge, they continued on along the Seaway path until reaching the RécréoParc.  After a lunch by the rapids they did a quick tour of the park, looking at it as a potential site for an overnight camping Fixture trip.
27 May Fixture Ride to St Lambert Locks

A rather large contingent of members showed up at the Shaika Cafe for a ride to the St Lambert locks.  They ten rode past the Olympic rowing basin and returned via the Jacques Cartier Bridge.  A.T. Lane later assisted in the Westmount APC cycling education program's trip to Old Montreal.
30 May Fixture Ride: Return from St Jerome

Present : H.S Tibbs, Annie Londonderry, & A.T. Lane  Minutes by A.T. Lane
Length of ride: 71 km
Map of ride
Photographs
After getting up very early for the 7:02 train to St Jerome at Vendome Station, the members relaxed in by a cafe beside the entrance to the P'tit Train du Nord entrance.  They then headed out for the return trip to Montreal, a distance of 72 km (including a few small detours).