Three years after Starley’s 100 mile ride, on July 1, Dominion day, 1874,  in Montreal, A.T. Lane, an immigrant from Liverpool, first rode an English high wheel bicycle from Coventry.  He worked for an importer of sporting equipment, and from then on began bringing bicycles and tricycles from England to Canada for resale. This Notman studio photograph was taken in 1880, 6 years after A.T. Lane’s first ride in Montreal.  His son Bertie, mounted on his tricycle, would have been only 3 years old.

Karl Kron’s 1887 book “10,000 Miles on a Bicycle” as well as many other cycling  journals of that time credit A.T. Lane as the first person to ride a high wheel bicycle in North America. 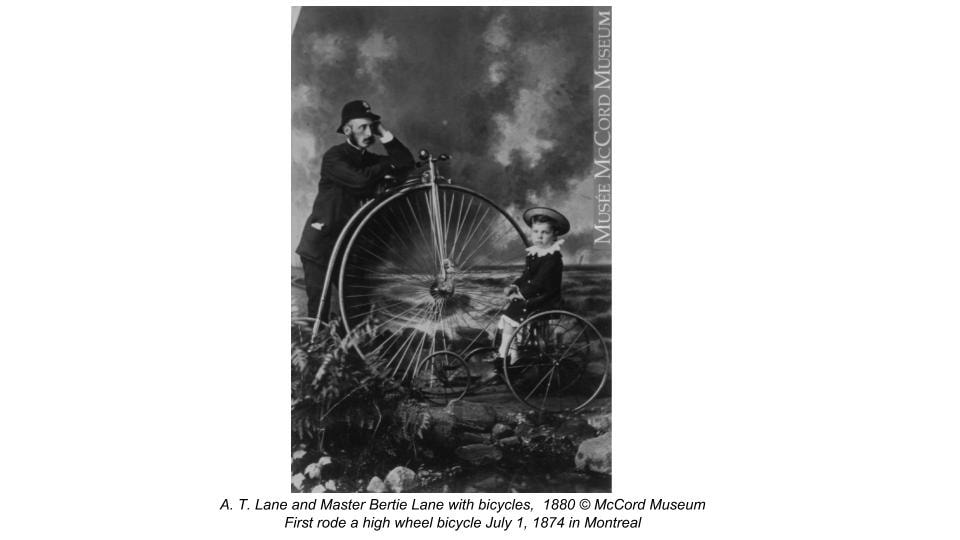 However, the High Wheel bicycle did not become widely known in North America until 2 years after A.T Lane’s first ride in Montreal. Bicycle manufacturers from England  exhibited the High Wheel at the Centennial world fair in Philadelphia. Over 10 million people attended that fair which also featured such new products as Alexander Graham Bell’s telephone, the Remington typewriter, and Heinz ketchup. 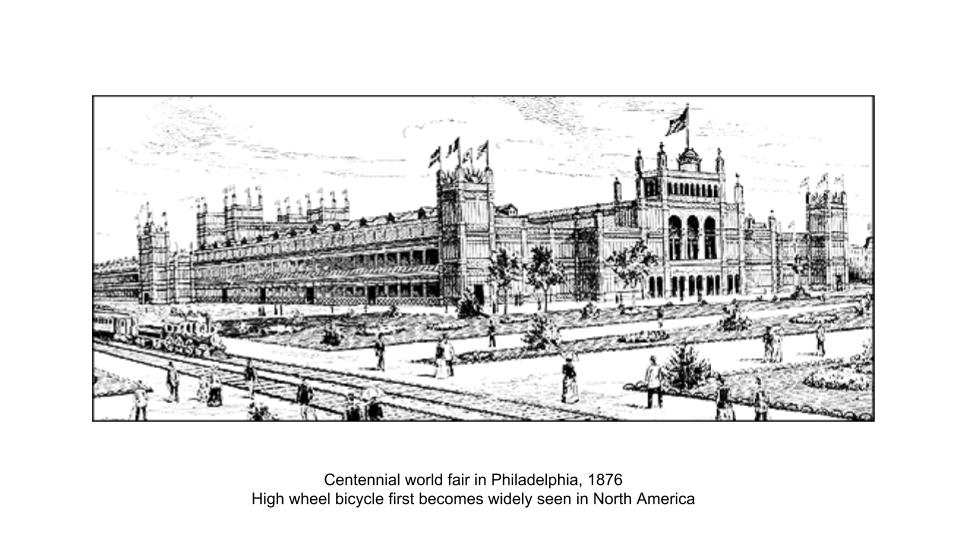 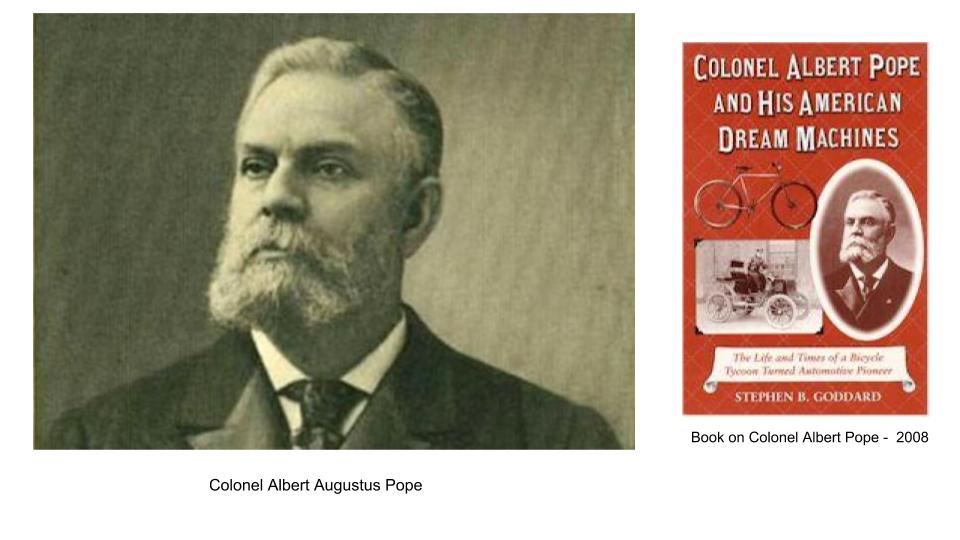 The high wheel bicycle became a sensation and inspired a wave of bicycle clubs.  Boston started the first club in North America, Feb 1878, followed by another in Bangor Maine. These first two clubs were both founded by patent lawyer Charles E. Pratt. 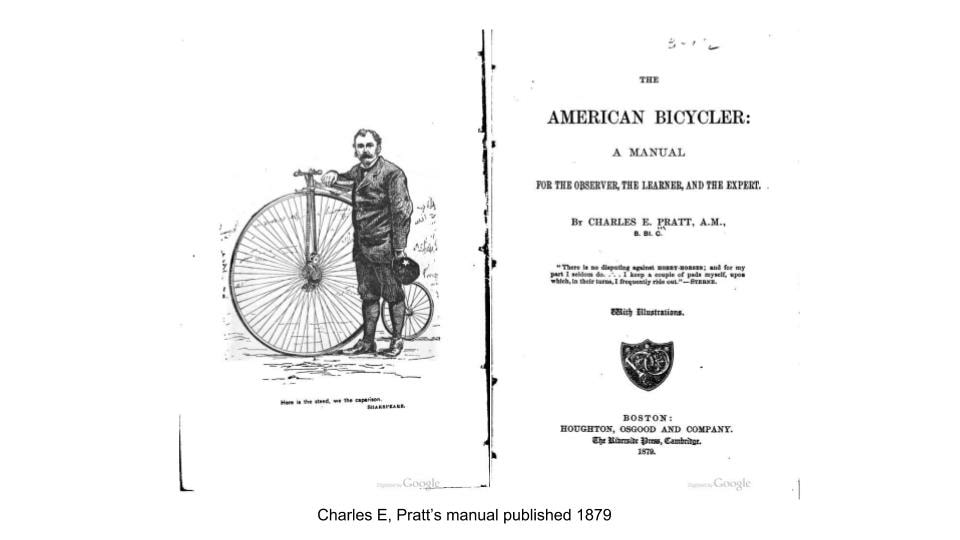 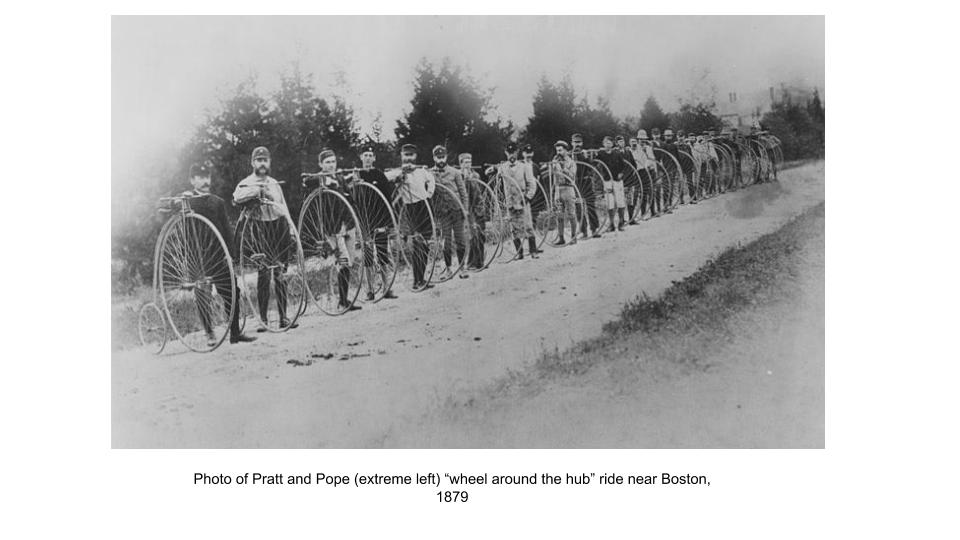 As Pope’s business grew Pratt became an employee and together they promoted cycling in America by founding bicycle clubs, publishing a sporting and travel journal called Outing magazine, and the creation of the League of American Wheelmen. Also known as the Law. 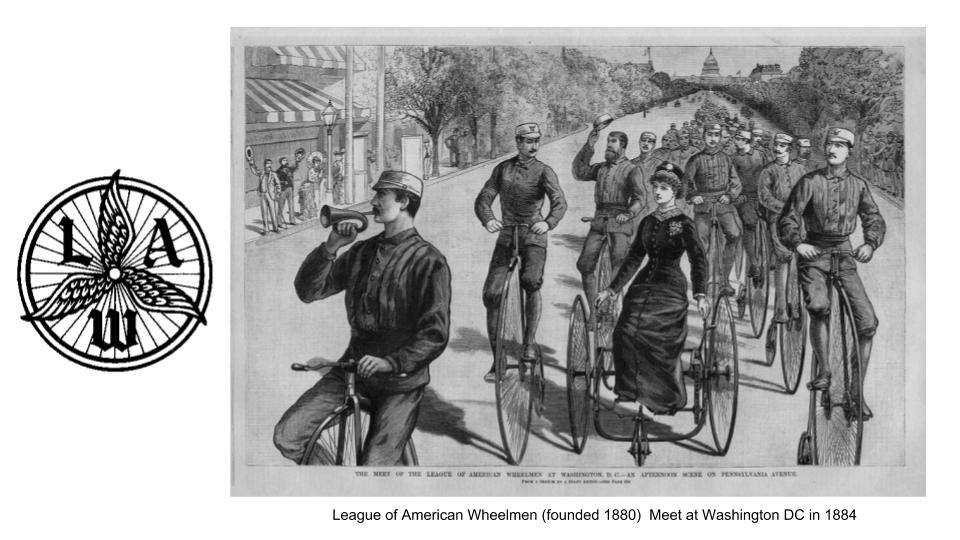 The bicycle was a new invention and they were not certain how best to promote it.  Should it be marketed as a new form of transportation for the masses, or a new racing sport, or a way to display one’s wealth and knowledge of the latest technology?  Since Pope was a civil war veteran, and bicycles were thought of in terms of being “iron horses” he thought that bicycle clubs should be run similar to the military cavalry.  His partner Pratt disdained racing as elitist and believed the bicycle should be promoted primarily as a means for ordinary people to travel out into the countryside.  Any legal issues regarding this new form of transport were handled by Pratt on behalf of Columbia Cycle, formulateting many of today’s legal concepts regarding road traffic safety.
NEXT