Present :   A.T. Lane, & Louis Rubenstein Minutes by A.T.  Lane
Length of ride: 35 km
Photographs
Map of ride
An easy ride out from Gare Centrale to Pierrefonds.
Lots of flooding and temporary dykes.
Eventually we had to find an alternate route to Ste Annes.
Discovered new bike paths we did not know existed, and made our way into Ste Anne.
2 May Quebec City Tour

Present :   A.T. Lane, & G.T. Bishop Minutes by A.T.  Lane
Length of ride: 68 km
Photographs
Map of ride
On the way to Quebec City we noticed that it had  snowed the night before our trip.
Admiring the Quebec City train station upon arrival.
Then we rode to Montmorency Falls and take some photos.
Then back to Quebec City in time for lunch.
Next was the ferry to Levis, and more photos.
A little side trip to the Davie Shipyard.
Then back across the river on the bridge.
A few photos of cruise ships in the port, and supper before getting on the train back to Montreal.
4 May Canadian Centre for the Great War

Present :   Daisy Bell, Kirkpatrick Macmillan, A.T. Lane, & Karl Kron Minutes by A.T.  Lane
Length of ride: 25 km
Photographs
After meeting at the Shaika Cafe, the members chatted with demonstrators asking for a Sherbrooke street bike path.
They continued on to the Lachine Canal.
Then did a tour of the Canadian Centre for the Great War. 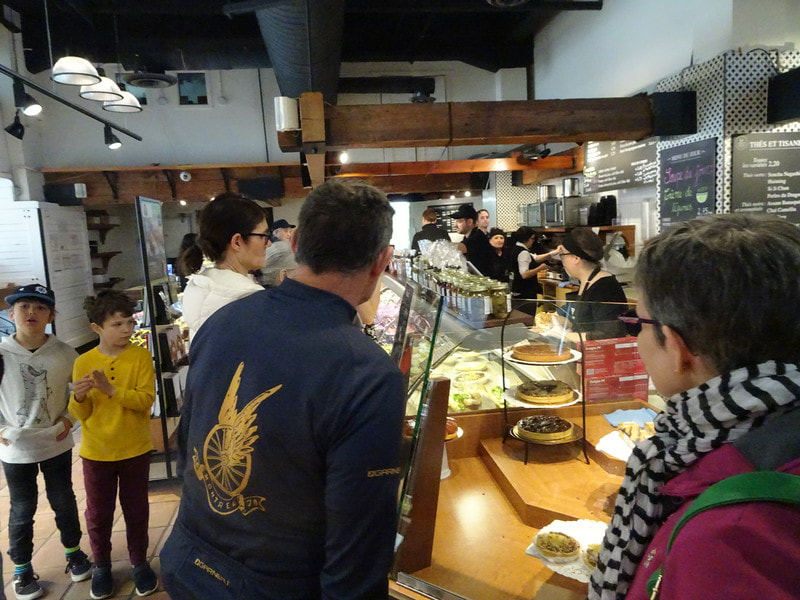 Followed by lunch at Atwater market.
8 May St Jean or Napierville

Present :   Daisy Bell, Kirkpatrick Macmillan, A.T. Lane, H.S. Tibbs & W.G. Ross Minutes by A.T.  Lane
Length of ride: 108 km
Photographs
Map of Ride
After taking the train to Candiac, the members headed out on the open road towards St Jean sur Richelieu.
Opps....too far, they ended up riding to Napierville, before turning back towards St Jean. Apprehension grew as they realized they weren't in Montreal anymore, were they in Kansas, or Saskatchewan?  How were they to get back?
A glimmer of hope as signs appeared that St Jean is in fact in the vicinity.
Being members of the Montreal Bicycle Club, they took some time to view the local history.
Finally arriving in St Jean for lunch, and a ride through the town,
Followed by a ride along the Richelieu river and into Chambly.
More riding, more bridges, and then back to Montreal.
9 May Twin Peaks

Present :   Daisy Bell, Kirkpatrick Macmillan, A.T. Lane, & Minutes by A.T.  Lane
Length of ride: 67 km
Map of Ride
Photographs
On a sunny yet cold day, the members crossed the Ice Bridge to the South Shore via the Ste Catherine Locks and warmed up at St Lambert.
15 May Ecomuseum

Present :   Daisy Bell, Kirkpatrick Macmillan, W.G. Ross, Louis Rubenstein, A.T. Lane, & Minutes by A.T.  Lane
Length of ride: 40 km
Map of Ride
Photographs
The members took the train out to Ste Anne and took some pictures of themselves and some of the locals at the Ecomuseum.
Then they headed out on the road, having lunch in Pointe Claire and navigating the puddles near the Lachine canal.
16 May Twin Peaks

Length of ride: 53 km
Map of Ride
With founder, A.T. Lane, in seclusion to ponder the implications of a Victorian holiday weekend being renamed Patriotes, it fell to standard bearer, G.T. Bishop, to lead club members Louis Rubenstein, Karl Kron and Daisy Greville through some very 'de souche' neighbourhoods of the city. 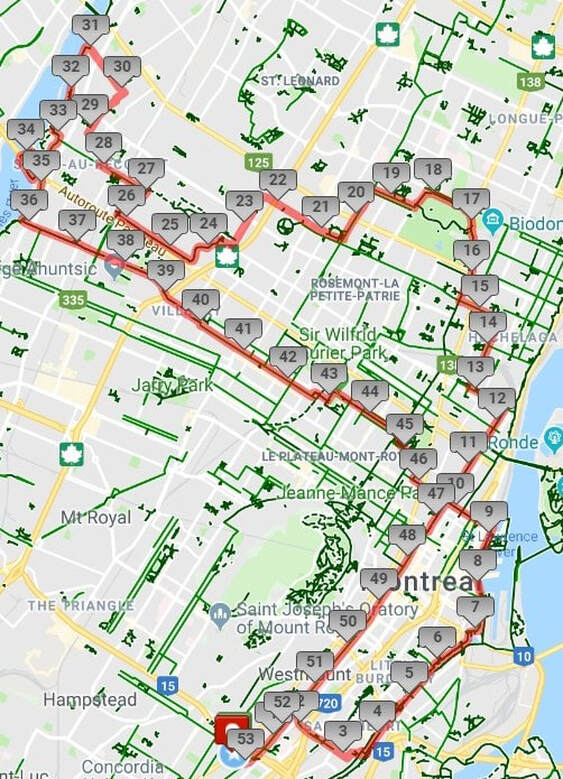 The weather was cool and cloudy but the rain stayed away and it warmed up as the ride went along. We set off down to the Lachine Canal and the Old Port to then pick up the de Maisonneuve bike path into Hochelaga borough. Traffic was light but there were a few tense moments as pedestrians wandered into the bike path blissfully unaware that the path might contain cyclists. We then turned north up a slight incline to pick up the Rachel bike path to take us to de Maisonneuve park where we stopped for a nature break before cycling along the newly paved section of the park's bike path on the east side of the park. 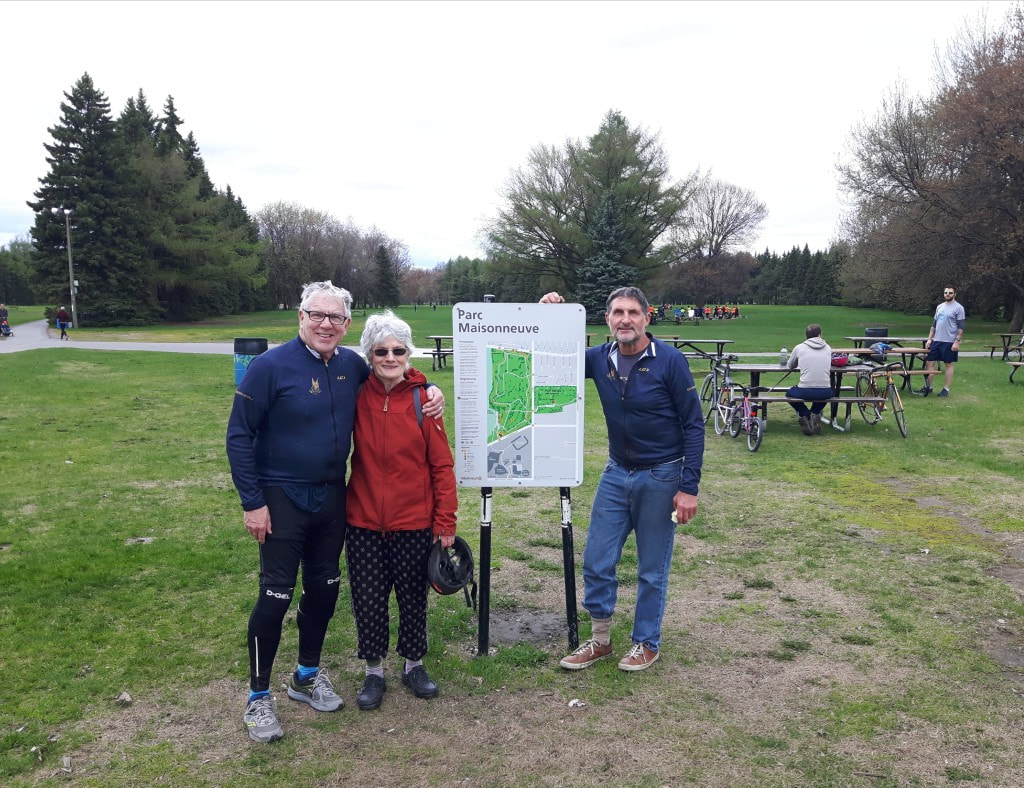 We continued up into Rosemont borough, then into Villeray-Saint-Michel-Parc-Extension (Daisy Greville was constantly wondering what borough we were in at any given moment), under the Metropolitan and along Jarry to head into the Park Frederic Back trail that circuits the Saint-Michel Environmental complex, past the Taz and then further north into Ahuntsic-Cartierville before finally entering the Ile-de-la-Visitation park at its eastern most extremity. 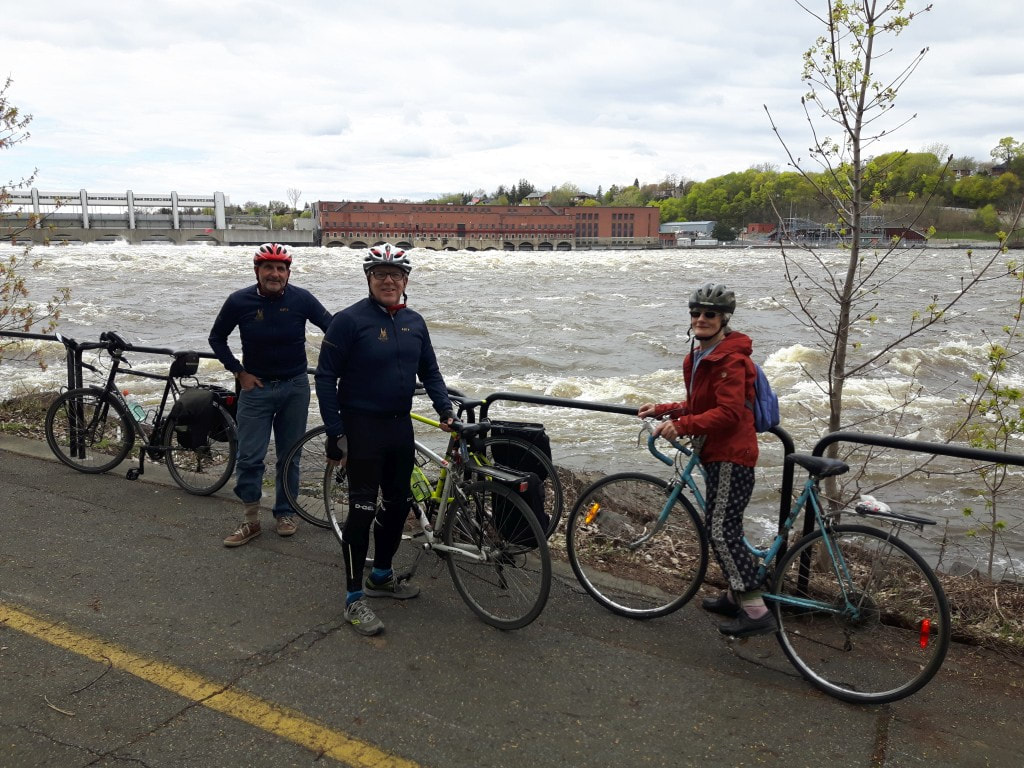 With more than half of our ride completed, it was time to find a spot for lunch. A. T. Lane had suggested the Bistro des Moulins, which had been closed for renovations last year and, surprise, was still closed this day. A stop at Racer's Cafe on Gouin was no more successful as they only offered coffee and ice cream. We went to plan B and headed up to rue Fleury and found a nice little Vietnamese restaurant, which offered tasty pho soups. 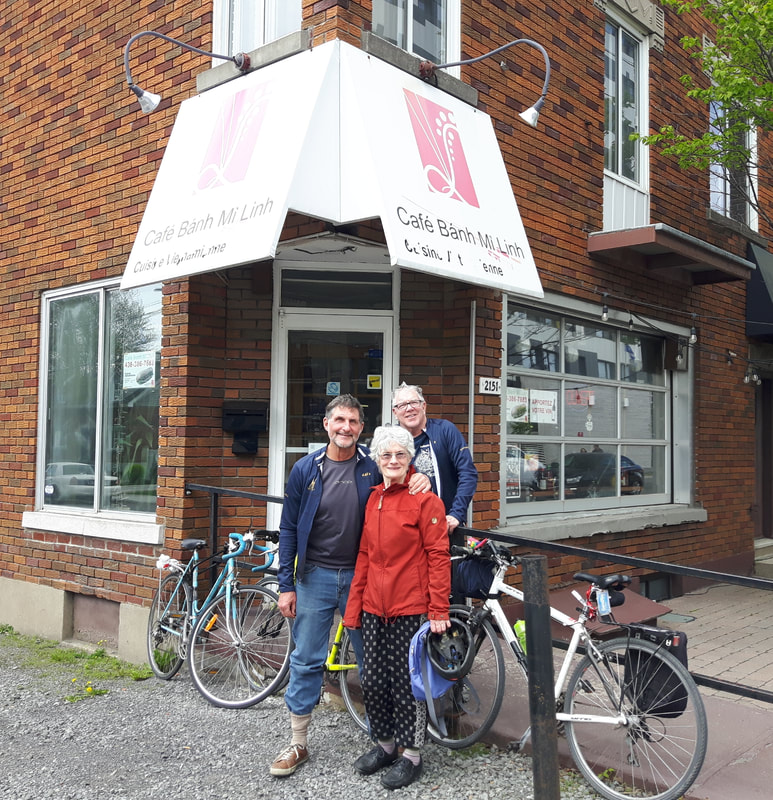 Rather than picking up our original route, we followed Fleury west to rejoin it along the North/South bike path at Christophe Colombe and made our way south back to the city centre. At Laurier Park, we followed the bike path west on Laurier to St. Urbain where Louis Rubenstein took over the mantel as G. T. Bishop headed back to his Plateau residence.

Present :   G.T. Bishop, Louis Rubenstein, A.T. Lane, & Minutes by A.T.  Lane
Length of ride: 73 km
Map of Ride
Photographs
The members took the train to St Jerome and after a few wrong way turns getting off the train, had breakfast at the cafe beside the P'tit Train du Nord gateway.
Soon we were on our way again, stopping only for lunch at Canada's most famous Cafe.
Some more cycling, then Louis decided to bid adieu to his friends and take a train back the rest of the way.
Upon arriving on the island of Montreal, we handed out a MBC card to a potential new younger member who expressed and interest in our uniforms.
Perhaps feeling nostalgic for Louis, A. T. took a few photos of the Rubenstein memorial water fountain, before taking in his bike to have the brake pads replaced.
The final leg of the journey was by Bixi, dropping it off at a like minded dock.
Addendum

Just after you left the train came exactly on time...................except it was on the wrong side.  So I did that highly illegal move to to cross the tracks only to discover.  That's why I have you along, A.T. , to get me on the right side. So i pedaled, feeling my way along over the bridge, turn right on Gouin down O'Brien, Ste-Croix, du College and visited my old cronies at Cote-de-Liesse and Alexis-Nihon.  Then I left and tried to cross under Metropolitain Boul but was thwarted by a freight train.  Anyway I am home again and in spite of the cold and rain and train mishaps it was a successful outing =  thanx to you and G.T. . 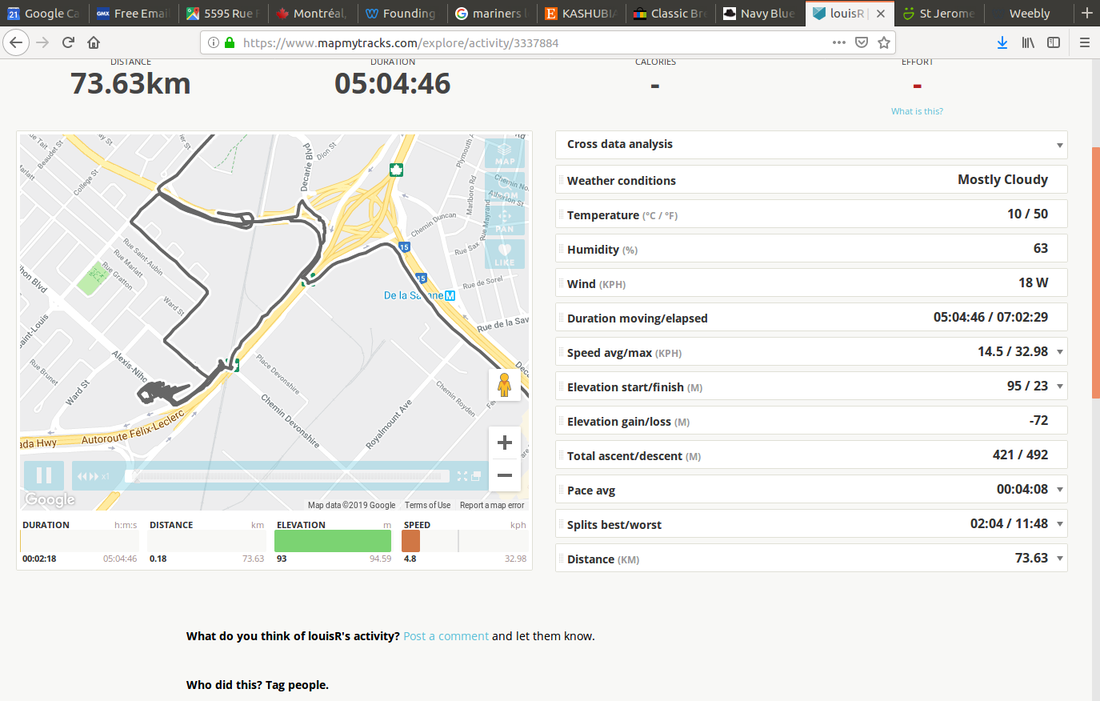 Detail of Louis route past the Metropolitan.
23 May Twin Peaks on a Bixi

Present :    A.T. Lane, G.T. Bishop Minutes by A.T.  Lane
Length of ride: 22 km
Map of Ride
Photographs
A.T. Lane, up for a challenge picked up a Bixi from a like minded docking station then met flag bearer G.T. Bishop for the ride uphill.
One peak done....
Then another...
More aerobic training observed on the way back down. 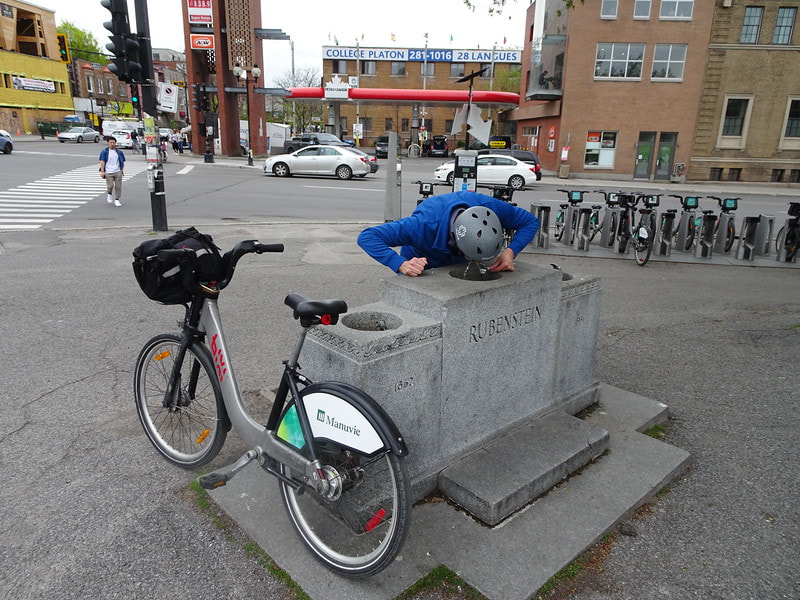 In need of a well placed water fountain after all that.....Thanks Louis

Present :   Karl Kron, W.G. Ross, Alice Hawkins, Gilles, A.T. Lane, & Minutes by A.T.  Lane
Length of ride (total): 50 km
Map of Ride
Photographs
Another coffee and chit chat before the ride, one member arrived too late for that.
Viewing volunteers cleaning up the shoreline....Hurray!!!
Checking out the best parts.
Surf season in full swing.
Followed by the Westmount Cycling Education tour to the Old Port.
Navigating our way there, and handling any little mishaps along the way.
Who wants ice cream?
28 May Repentigny

Checking out what the bike paths look like there.
And the local history.
Looking at the environment, eventually coming  to the same point we where on the Return from St Jerome last week.
30 May MIA Sherbrooke Street cards

Present :   A.T. Lane, & Minutes by A.T.  Lane
Length of ride: 20 km
MIA Sherbrooke cards replaced, prizes will be given to anyone who can locate all the pictures.