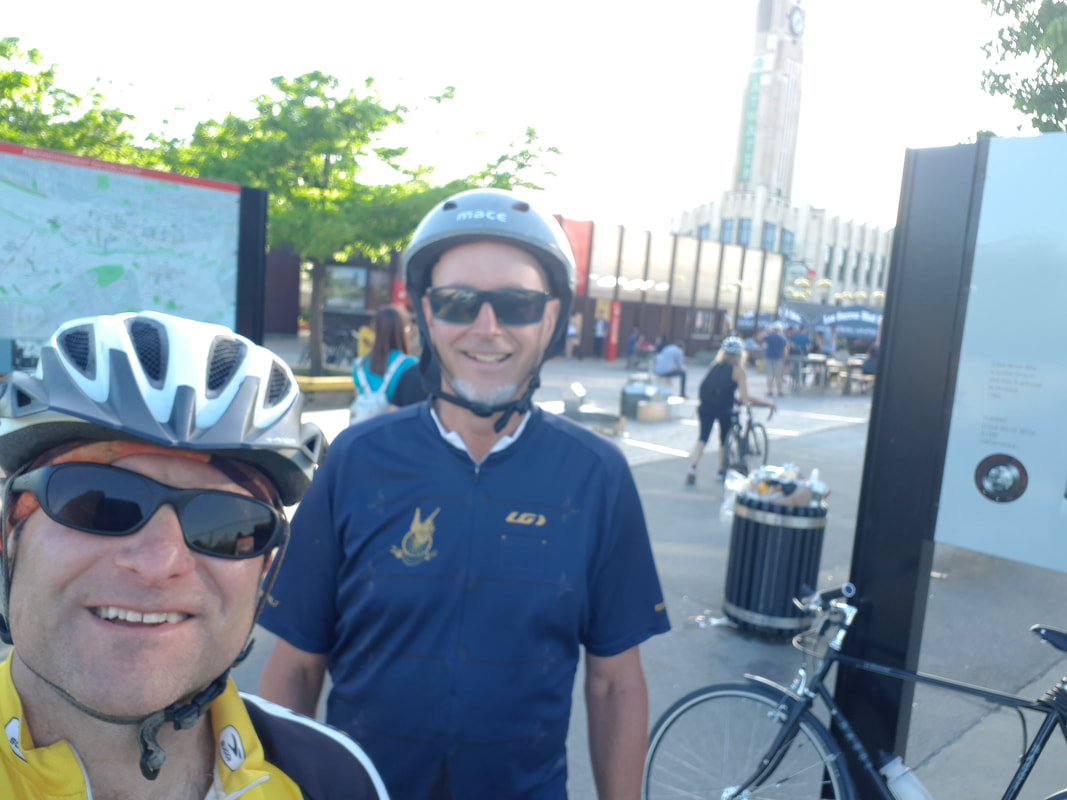 The members set out early to meet at Atwater market by 7:00 am.  They had a coffee and discussed what a "real" Tour de l'Île de Montréal actually meant.  They decided that in order to qualify they must visit both the eastern (Pointe aux Trembles), western (Ste Anne de Bellevue) tips of the island, and follow the shorelines by visiting Cap St Jacques as well as the Lachine rapids.

Along the way they stopped to photograph a visiting cruise ship in the Old Port, found a stairway entrance to rue Notre Dame, various exercise equipment for parks, a memorial to a notable sailor, returning about 12 hours later to Atwater Market.
6 June Fixture Ride to de Maisonneuve Park

Present :  Annie Londonderry, Louis Rubenstein, Daisy Greville,  Dorthy Cole, C.J. Sidey, Amelia Bloomer,
A.T. Lane & and one new member (Sobriquet not yet assigned) Minutes by A.T. Lane
Length of ride: 40 km
Map of ride (first half)
Map of ride (2nd half)
Photgraphs
MBC members awaiting ferry to Pointe-Aux-Trembles
The members met at the Shaika Cafe, and instead of finishing their coffees they headed out to the Old Port in order to be sure of making it to the 9:30 departure of the ferry to Pointe-Aux-Trembles.  It seems however that the test runs of that ferry have now ended as no boat appeared!!!

They headed out instead for a quick viewing of the Olympic Swimming pool and a picnic lunch in de Maisonneuve Park.
It's All About the Bridges
8-10 June Excursion from Rivière-à-Pierre to Quebec City

The members took a train from Montreal to Rivière-à-Pierre then set out on the trail
It is very woody.
With granite signposts and many bridges.
That evening they tasted the local cuisine, then rested in cabins near St Raymond.
The following morning they enjoyed the sunshine and the view of the river before heading out in search of breakfast.
Mets Chinois followed by more bridges. 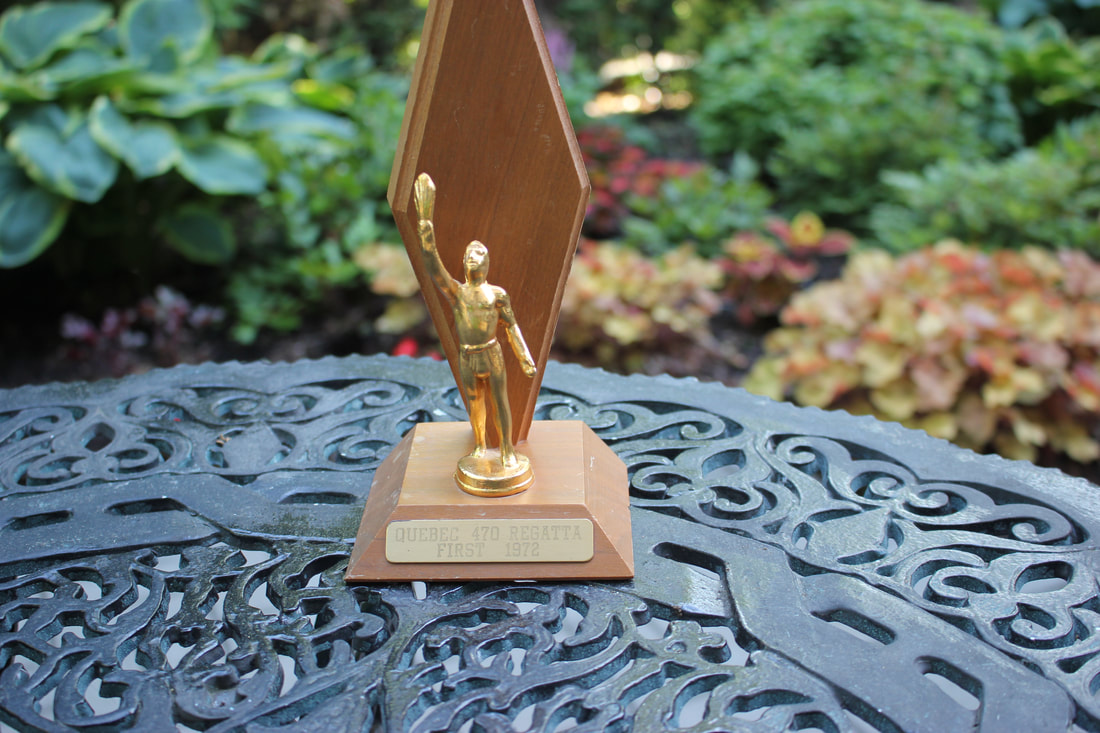 They took a side trip to Lac St Joseph, site of the 1972 Quebec 470 regatta.
They passed  over and under more bridges going into Quebec city then stopped by the train station for photos.
That night they stayed at Maison Du Général, named after General Richard Montgomery, and reflected upon the series of tit for tat conflicts such as the burning of the White House in 1814 and the 2018 security risks Canada now poses.
The next morning they took a side trip to Chutes Montmorency.
Took a ferry to Lévis. (No need for a bridge here)
Proceeded along the south shore.
Crossed a bridge over the Chaudière River.
And finally the big bridge, with an incredibly narrow walkway, over the Saint Lawrence River.
Interesting artwork and more bike paths alongside a wooded hillside going back to Quebec City.
Return to Montreal, June 11, and still more bridge work to be done. 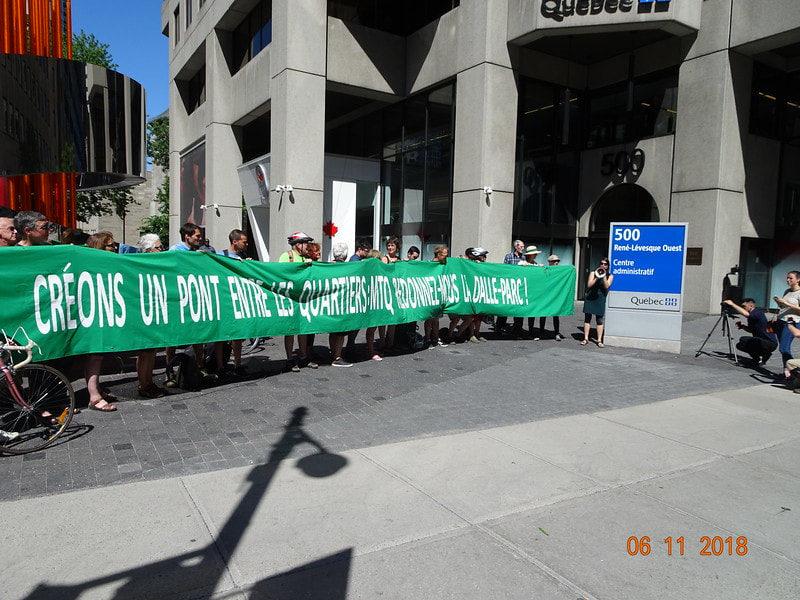 The members met at the Vendome station to visit the Train Museum in St Constant.
G.T. Bishop took his role of Flag Bearer seriously, to the delight of all the group. 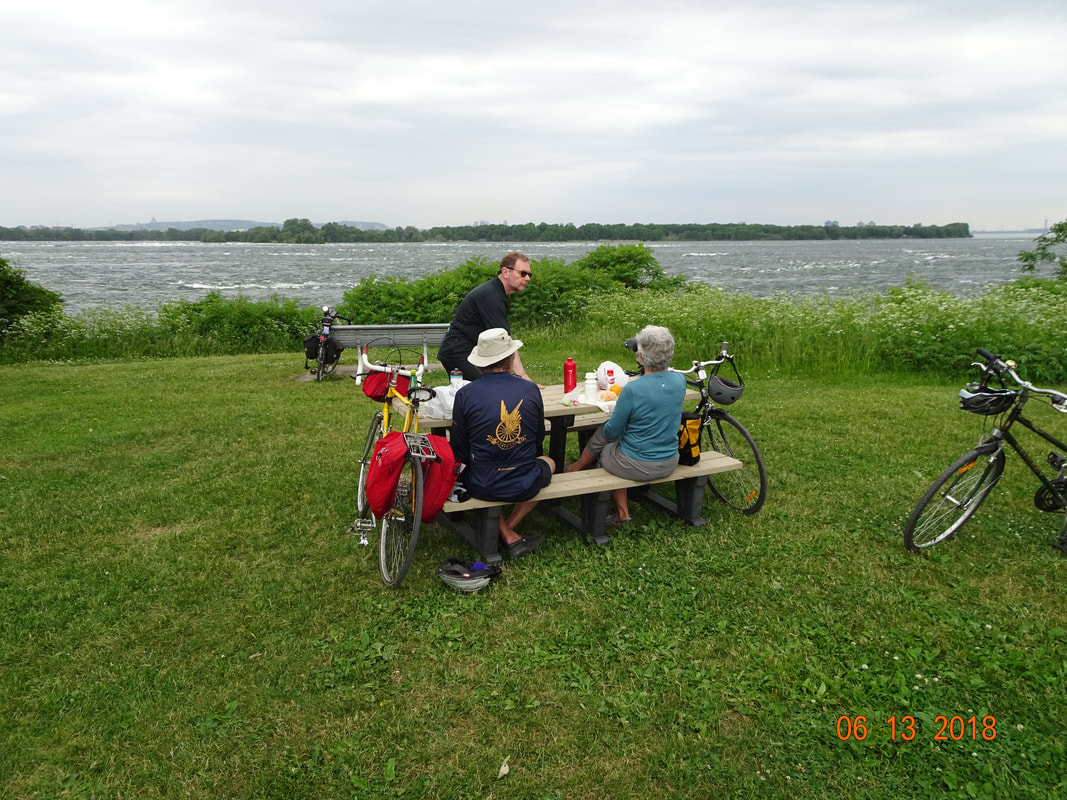 On the return to Montreal, the first to break off for home was W.G. Ross, the rest of the group had lunch viewing the south side of the Lachine Rapids.

Afterwards A.T, and G.T. decided to explore the western part of the Seaway path, while Annie and H.S. followed the direct path home.  Mishap befell A.T. however with a flat tire, however he managed to hitch a lift from a passing Good Samaritan back to Angrignon metro.
20 June Fixture Ride along the P’tit train du Nord

Photgraphs
The members met at Vendome station and took the 7:02 AMT train to St Jerome where they had coffee in preparation for the ride. 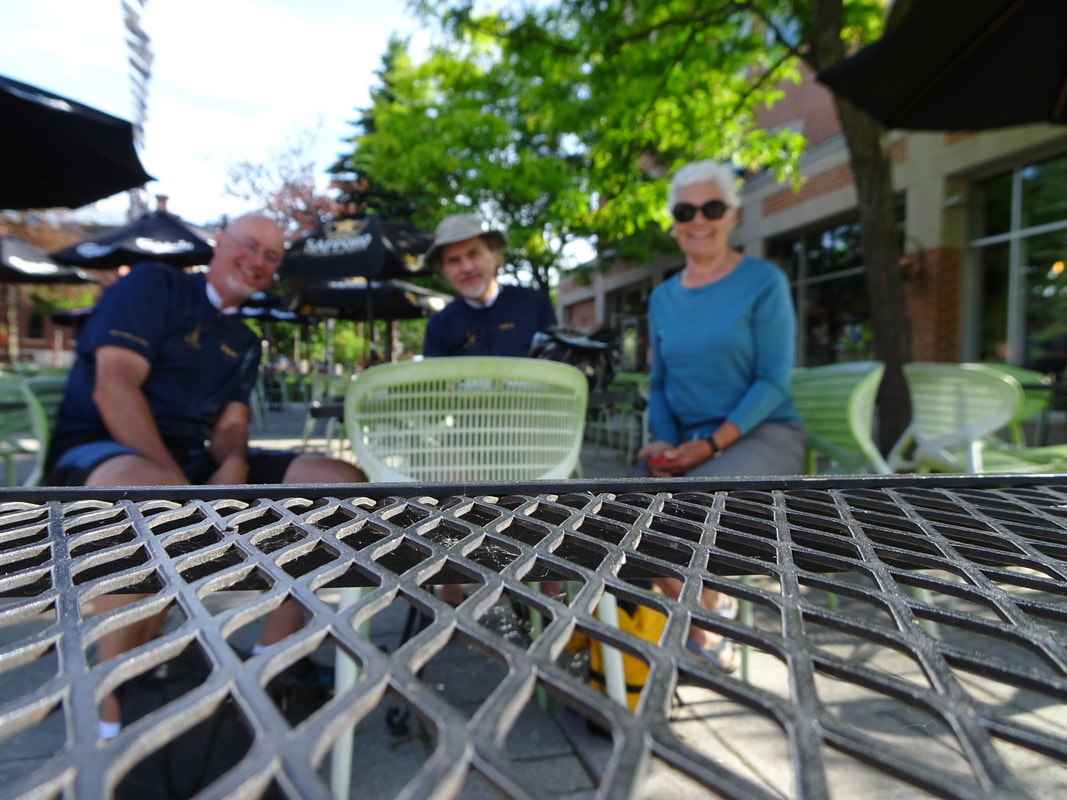 Along the way they posed for pictures by the rivers.
Viewed an outdoor photo exhibit.
And took more pictures of the rivers. 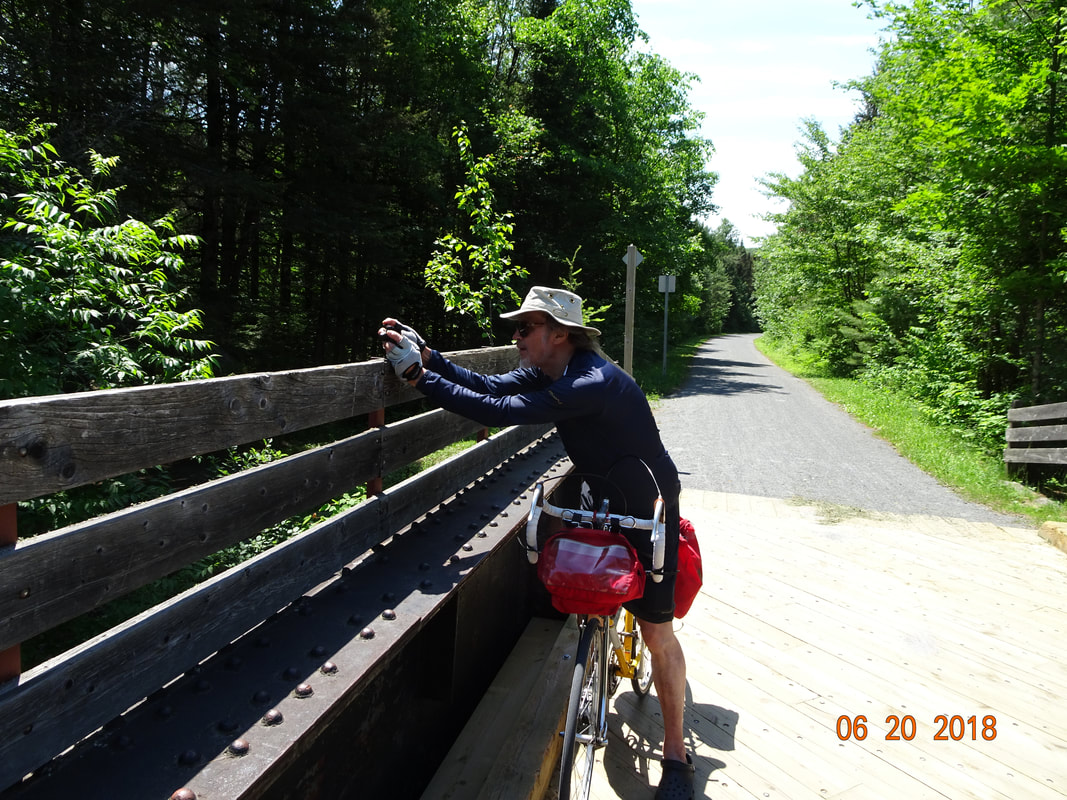 Upon reaching Val David, they had lunch and then rode back to St Jerome in time for the 16:51 train to Montreal. 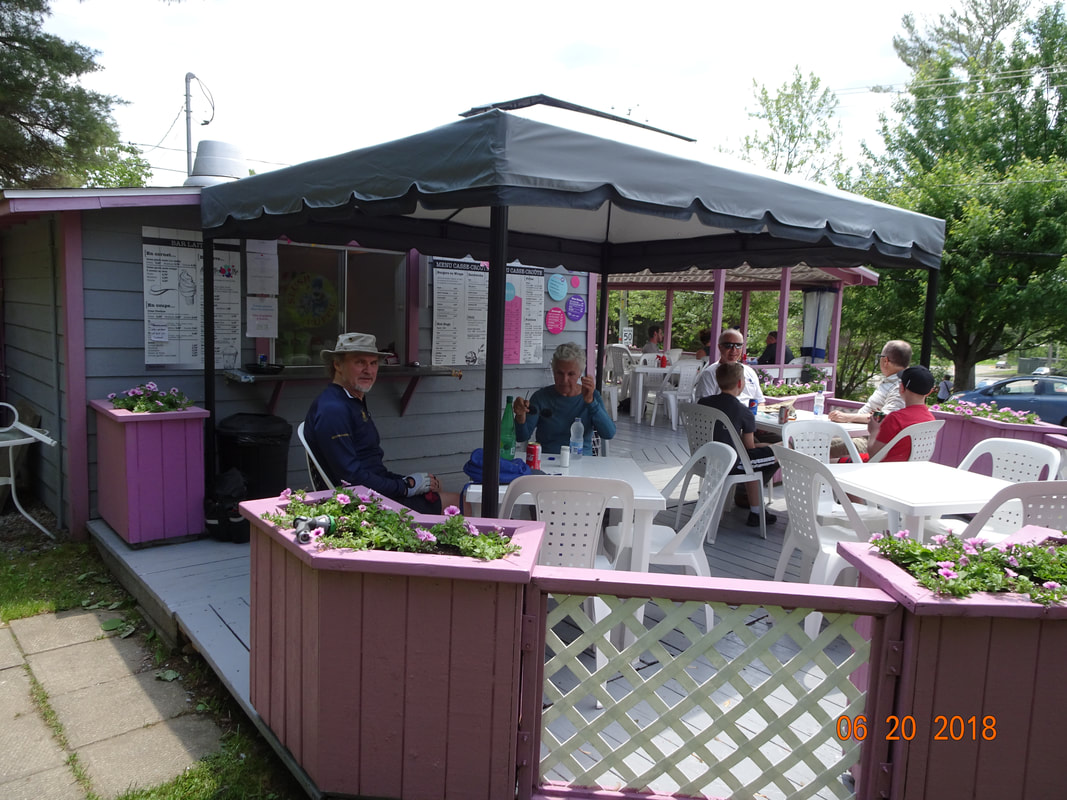 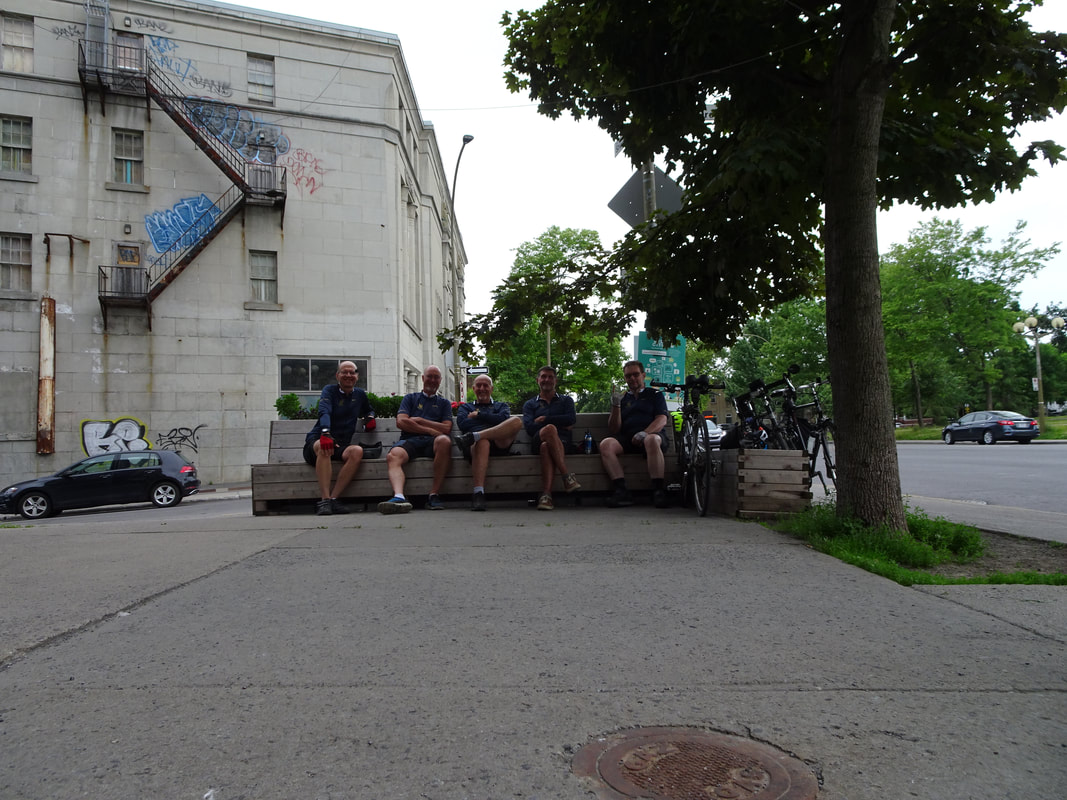 The members met at the Shaika cafe then headed out to Parc Bellerive, to catch the 10:00 am ferry to the Iles-de-Boucherville.  When they arrived however they learned that because of the crane workers strike, no dock had been installed!!!
Undaunted, they continued on to Pointe-Aux-Trembles and took the ferry to Varennes, returning via the South Shore and the St Lambert locks.
27 June Fixture along Soulanges Canal to Valleyfield and back to Montreal


Present :   A.T. Lane  minutes  by A.T. Lane
Length of ride: 120 km
Blog Post Comment by A.T. Lane
Map of ride
Photgraphs
A lonely A.T. Lane took the train to Dorion in order to set out on the Soulanges Canal to Valleyfield.
In Pointe-des-Cascades at the start of the Soulanges Canal path is the Anchor Park.  It is a delightful display of ship anchors taken recovered from the area
One of the anchors, which has a Swastika image as part of the casting, created a controversy in 2017.  I noticed that there is still no plaque explaining the anchor.
.Further along the path, there are impressive remains of old canal locks,
A recently built highway that passes under the canal.
At Les Cèdres, I stopped to check if the ferry was running that day.  No, it runs Thursday to Sunday. 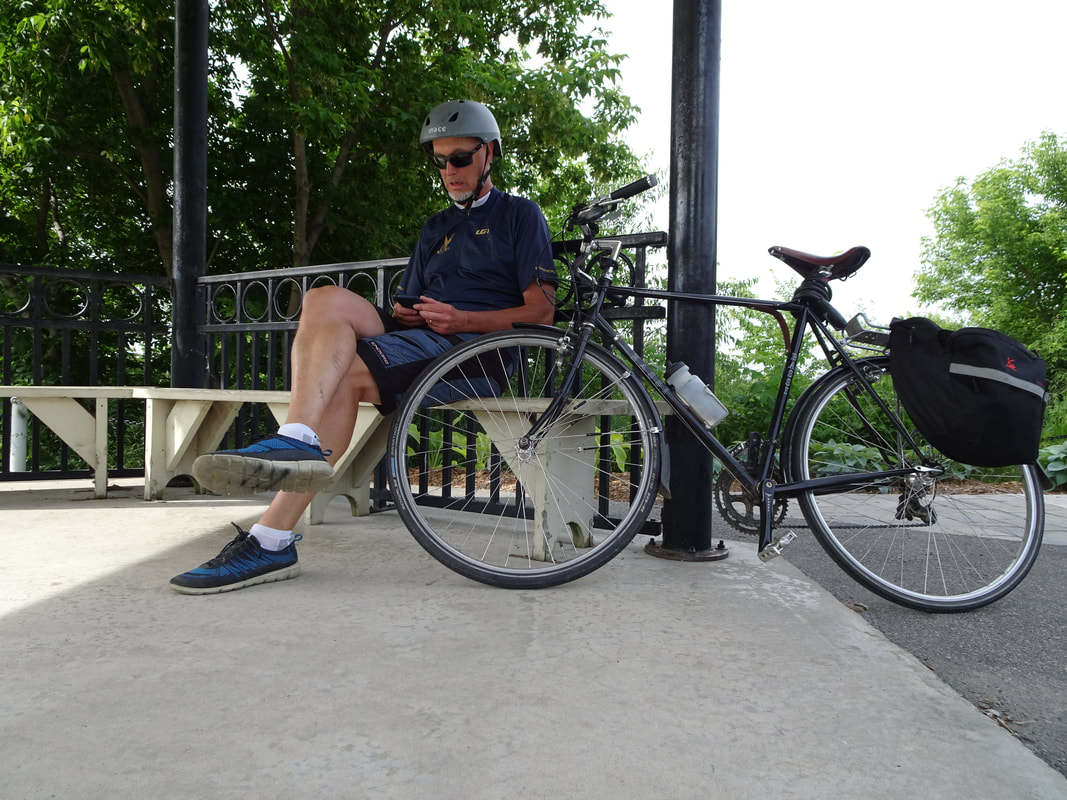 At Coteau-du-Lac there is a historic site with fort. Canada's first lock canal, and my personal favourite, replica cannons built by yours truly in Meaford Ont. 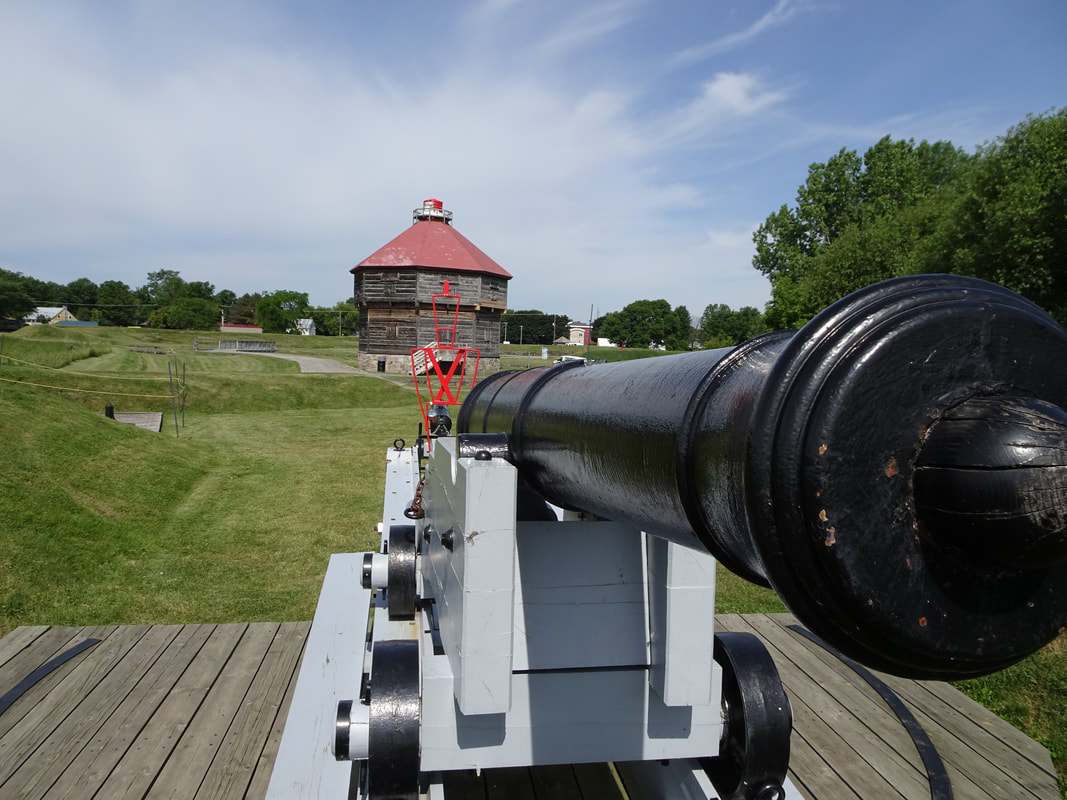 Finally reaching Valleyfield, I stopped at a cafe for a short rest and reading material. 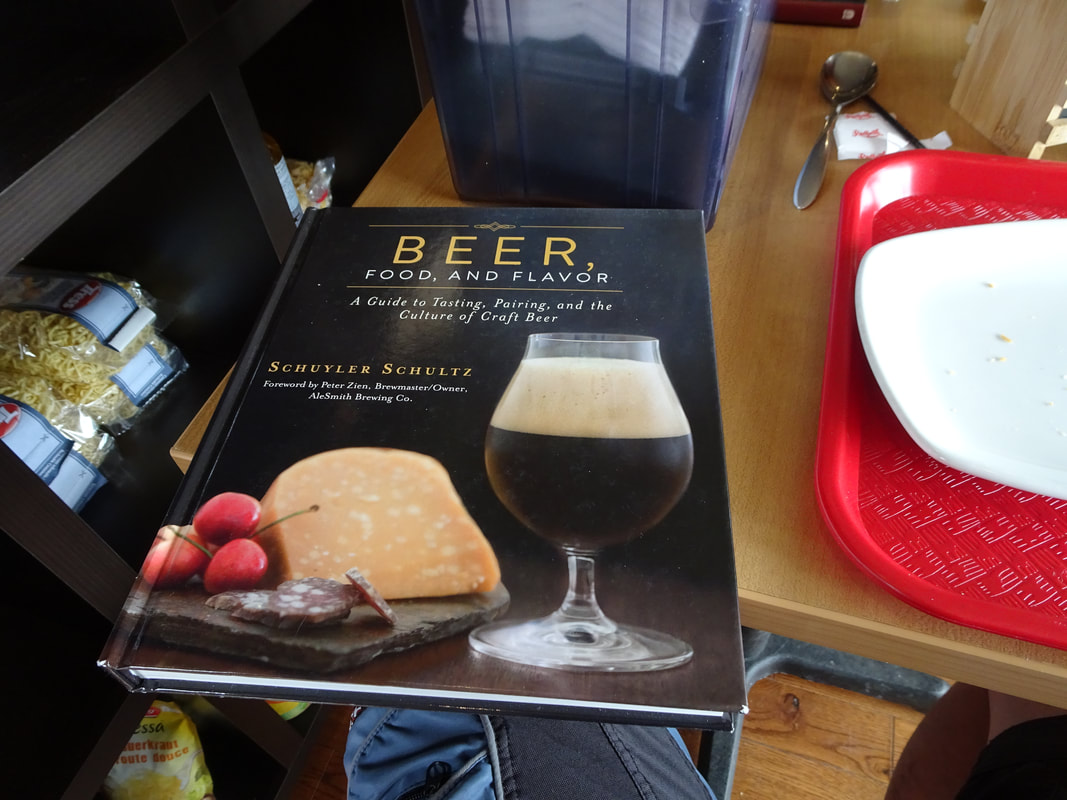 Returning to Montreal, I stopped for a while in Ste Anne, then continued on home.  The total length of the ride was 75 miles which I was sure would affect my Eddington number.