Present :  Dorthy Cole & A.T. Lane Minutes by A.T. Lane
Length of ride: 50 km
Map of ride
Photgraphs
On a very hot and humid Canada Day, the two members met at the Lachine Dock and took the 8:45 ferry to Ile St-Bernard.  Because of the heat they decided to take a shorter ride up the Chateauguay river which was a new exploration for A.T. Lane.  The intent was to go up the west side of the river to hwy 205 and return to Ile St-Bernard along the east side of the river.
Initially it was easy going with a well defined path along the river and nice views.
Further along however, after passing  major overpass for Auto Route 30, the road although quiet has many areas of open sun and few parks to rest at. 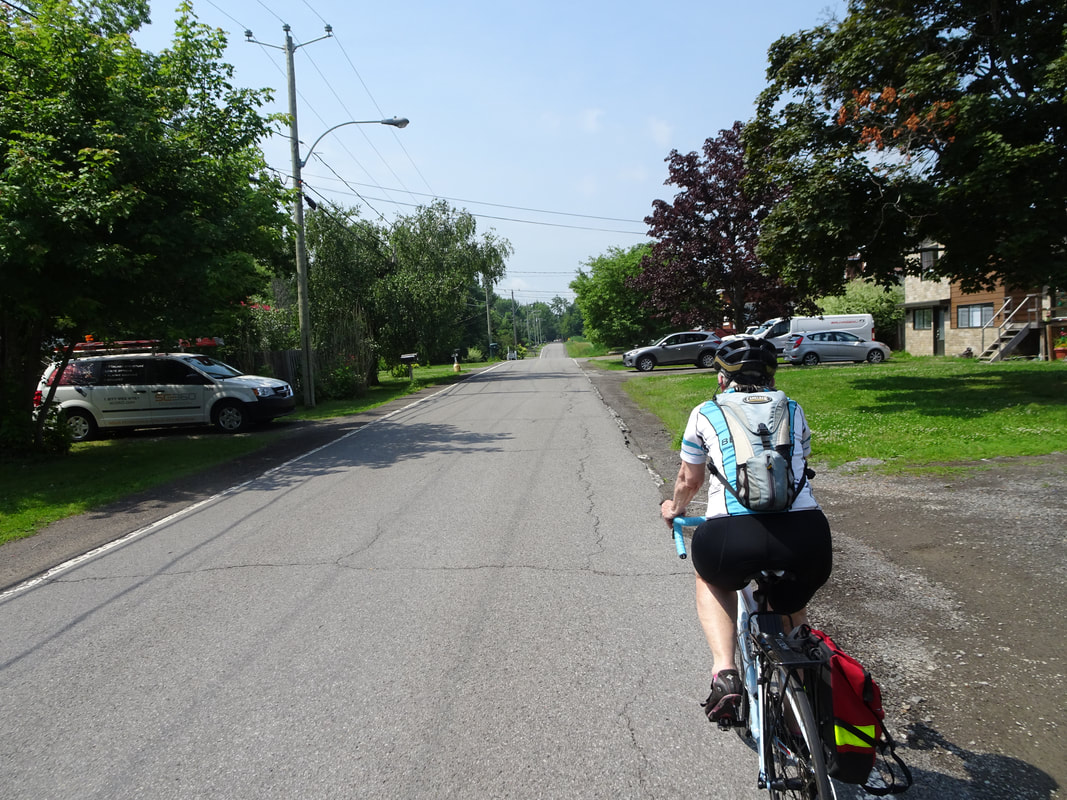 The members turned back before reaching hwy 205, and stopped where they could to find shade and comfort.
Eventually they made it back to Ile St-Bernard, and could cool off, before catching a return ferry to Montreal.
4 July Fixture Ride Lachine Canal to Old Port

Present :  W.G. Ross & A.T. Lane Minutes by A.T. Lane
Length of ride: 32 km
Map of ride
Photgraphs
Blog Post by W.G. Ross
On another very hot and humid day, the members met at the Shaika Cafe  and  headed out to Ville St Pierre to take the Lachine Canal Path.
They briefly debated stopping at Atwater market, but decided to head on to the Old Port.
Along the way they discussed daylighting of rivers.  A topic that had been discussed at a film recently. 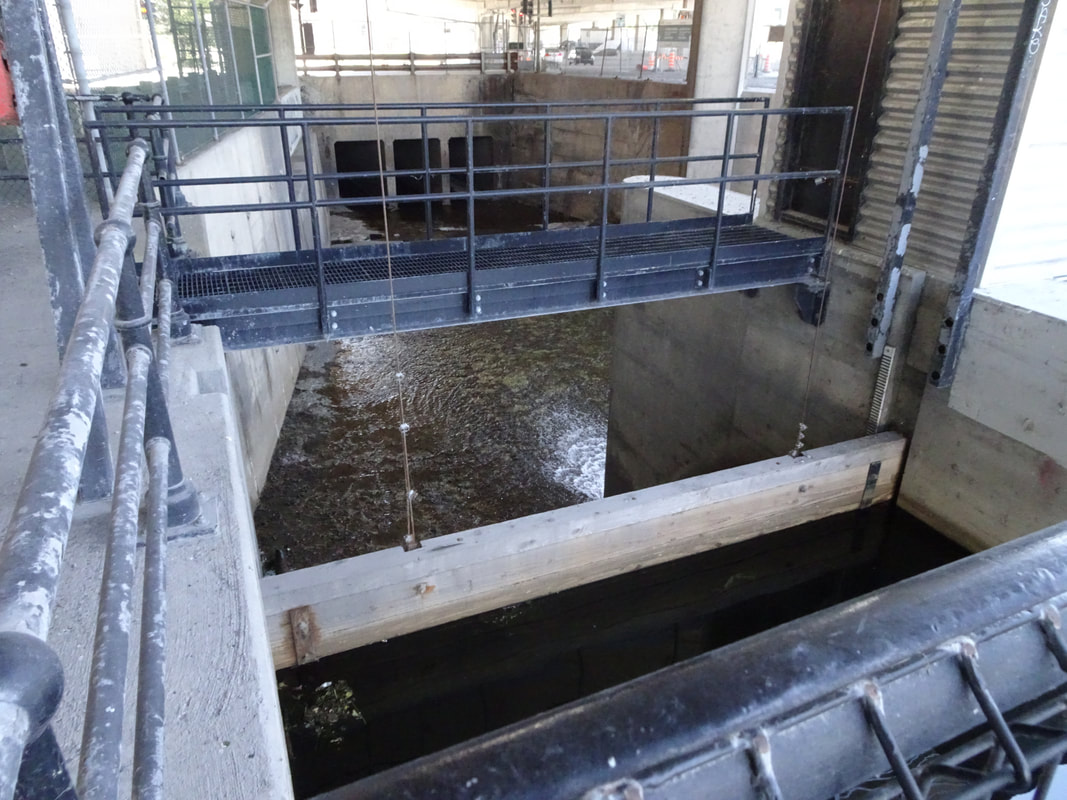 At the Old Port, they happened to see the Blue Moon, which was docked in Montreal that day.  The boat is based in Georgetown, Cayman Islands.  Looking at it made me think of tax avoidance schemes, public knowledge of income tax, and Pigouvian tax systems.
After eating some Ice cream at the Old Port, the members split up, W.G.Ross returning along the Lachine Canal path, A.T. Lane continuing on to Parc La Fontaine and over Mont Royal, attempting all along to stay in the shade.
7 July Fixture Ride to Îles-de-Boucherville


Present :  Dorthy Cole, Daisy Greville, Marijtje & A.T. Lane Minutes by A.T. Lane
Length of ride: 72 km
Map of ride
Photgraphs
set The members met at the Shaika Cafe and set off to the Promenade Bellerive.  Daisy became separated from the group and we were unsure where she was.
Fortunately, she re-appeared shortly before the arrival of the ferry.
We cycled around the  Îles-de-Boucherville, returning via the South Shore, stopping at St Lambert for a rest before returning to Montreal. 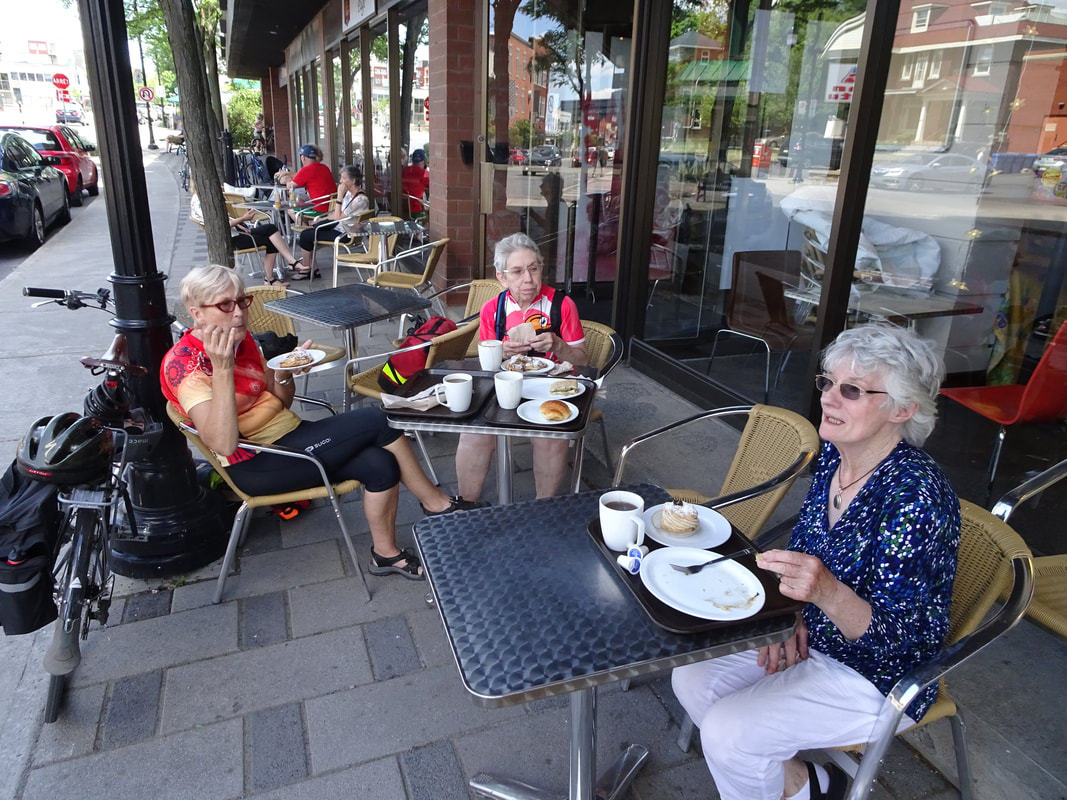 Present :  W.G. Ross Louis Rubenstein, H.S. Tibbs & A.T. Lane Minutes by A.T. Lane
Length of ride: 65 km
Map of ride -1
Map of ride -2
Map of ride -3
Photgraphs
The members met at TMR train station and rode the train to Deux Montagnes.  Along the way they discussed Louis's recent trip to  Russia , the Gazette article on the burying the last open section to the Rivere St Pierre , and the recent news about the Westmount Youth Orchestra.
They headed out  towards Sainte-Thérèse, it was the first time the members had cycled that section and they were curious as to how the state of the paths.  Picking  out places to stop and eat along the way.
East of Sainte-Thérèse,  it becomes more difficult to follow the path as it winds up and down suburban streets, but eventually we reconnected to the main Route Verte and crossed over the river into Laval.
After a lunch break at Tim Horton's, the group started to split up, with Louis taking  the metro so as to be in time to watch the World Cup game, W.G. taking the western O'Brien route home in Montreal and A.T. dropping his bike off in the Plateau to have a spoke fixed.  Tibby being the only member to return via the planned route through Parc La Fontaine.
14 July Fixture Ride through Beauharnois

Present :  Dorthy Cole, Karl Krone & A.T. Lane Minutes by A.T. Lane
Length of ride: 102 km
Map of ride
Photgraphs
The members met for the 8:45 ferry to Ile St Bernard, with A.T. barely making the boat.  After a coffee on Ile St Bernard they headed out towards Beauharnois.
Along the way Dorothy pointed out the Taj Mahal, before entering the town.
They then passed over a bridge and into a tunnel.  Any guesses on when the Seaway tunnel was built?
Shortly after the tunnel they stumbled upon a war memorial for Quebec volunteers in the Vietnam war.
And shortly after that a Museum on Cambrian era Fossils.
Then a second ferry to Les Cèdres and the start of the return to Montreal via the Soulanges Canal.
A great theatre venu at Pointe-des-Cascades BTW
18 July Fixture Return from St Justin

Present :  W. G. Ross, G. T. Bishop, H.S. Tibbs, Shamrock Mary & A.T. Lane Minutes by A.T. Lane
Length of ride: 128 km
Map of ride (Partial)
Photgraphs
Blog Post by W. G. Ross
The members gathered at the Via Rail baggage counter to send their steeds off to St Justin.
Apprehension grew as they watched the train depart and realization of how far it was back to Montreal dawned upon them.
They mounted up, and started the return trip, posing for a few pictures along the way.
In the MBC tradition of using as many non automotive modes of transport as possible, they manged to fit in a ferry ride to Sorel. It was on this boat that A.T. Lane discovered that his Map My Tracks was not recording and reset it.
They took in some sights around Sorel, exhausted themselves riding along road shoulders and then took a break at a fruit and veggie stand.  A question arose amongst those at the table "How much farther is it to Montreal?"
After some more pedalling, they came upon familiar landmarks from earlier Fixture rides, they knew then they were getting closer.
Taking a break at Boucherville sur la Mer, thoughts were given to alternate forms of transport such as the Metro. 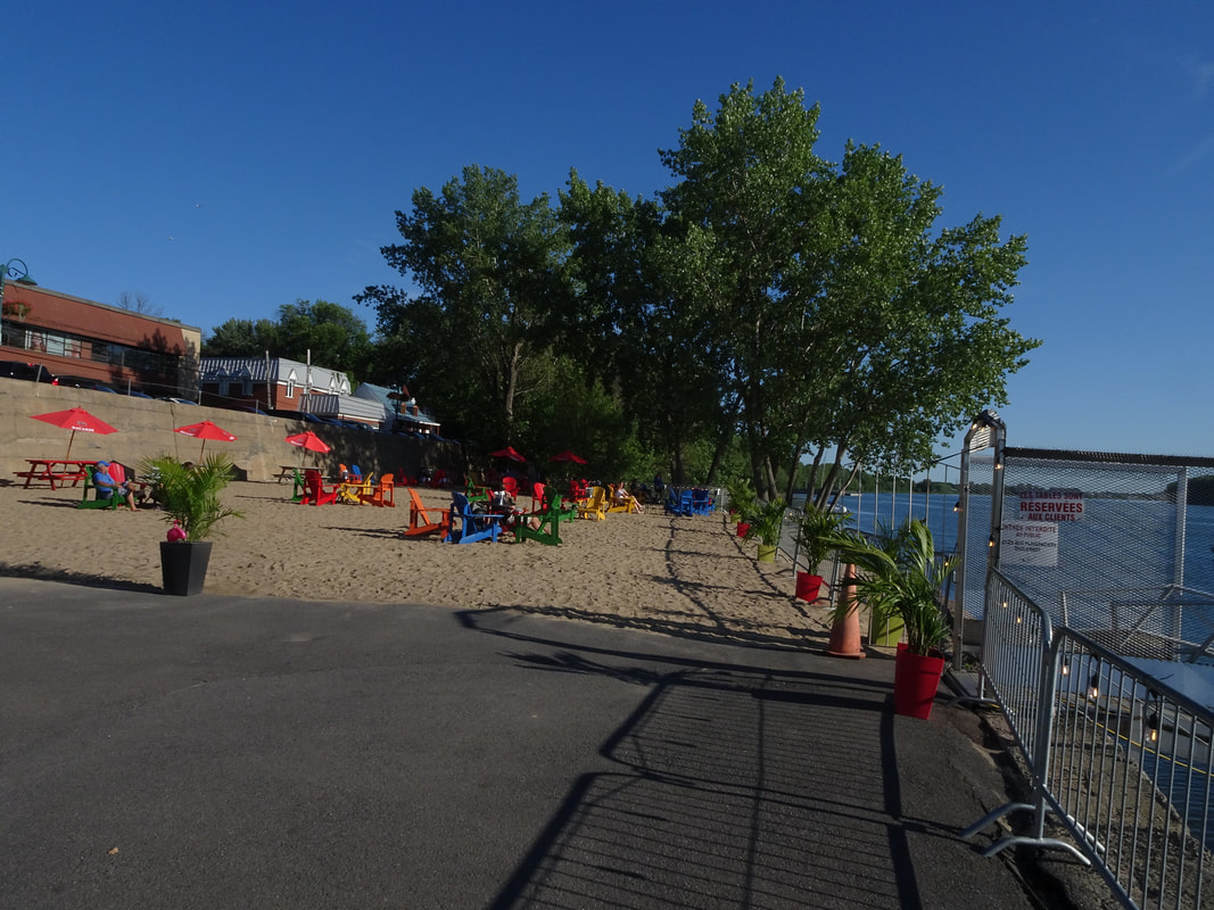 Spirits improved somewhat  as the path no longer involved riding on the road shoulder.
However at the first opportunity, a dissident group broke off, determined to find a route over the highway and to the Longueuil Metro.
Alas, upon reaching the counter, they found that the Metro was closed to bicycles because of the fireworks display that night.  They would have to pedal over the Pont Jacques Cartier Bridge as well.  A great ending to the day.
21 July Fixture Ride Around the Mountain

Present :  A.T. Lane Minutes by A.T. Lane
Length of ride: 61 km
Map of ride
Photgraphs
A lonely A.T. Lane set out from the Shaika cafe to Lachine, he then tuned east going over  the Ice Bridge, Jacques Cartier Bridge then out to Maisonneuve Park, returning via the north side of the mountain.
28 July Fixture Montreal South West

The ride began shortly after and proceeded along de Maisonneuve to Mo-West and down the hill to V-S-P and stopped tp marvel at the extravagance of the new Du Canal railway stop - "The Stairway to heaven". They then went to the next train station on the line, Lasalle. Next under the Mercier bridge where photos were taken with a dozen or so Canada Geese that are perhaps now going to be regular visitors to the bike path - pretty but they have other problems! 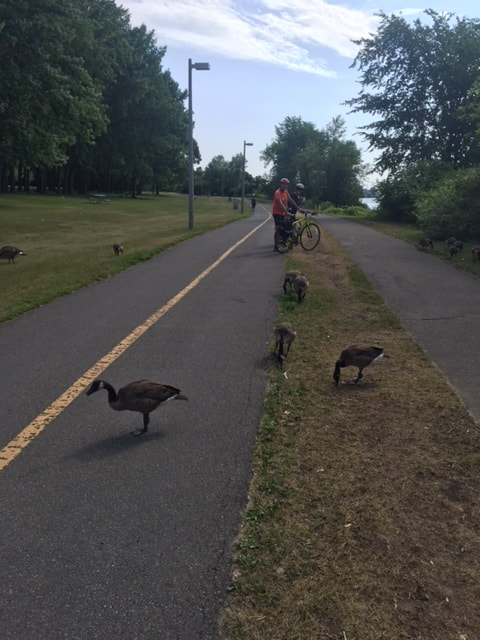 The trio ventured on and crossed thru Lasalle at Steven street past the Douglas Hospital - to which, so far, none of us had been admitted. We crossed de la Vérandré and had a very pleaseant scenic ride in Parc Angrignon and continued past the shopping Centre to St-Patrick over the canal and left toward the Ville St-Pierre and Devil's Hill which was ridden up without stopping.