Present : A.T. Lane, Louis Rubenstein, & G.T. Bishop  Minutes by A.T. Lane
Length of ride 90 km
Photos
Route
The members took an early morning train to Dorion then headed out on the road.
Louis took great pride in pointing out the Roman ruins to a rather skeptical audience. 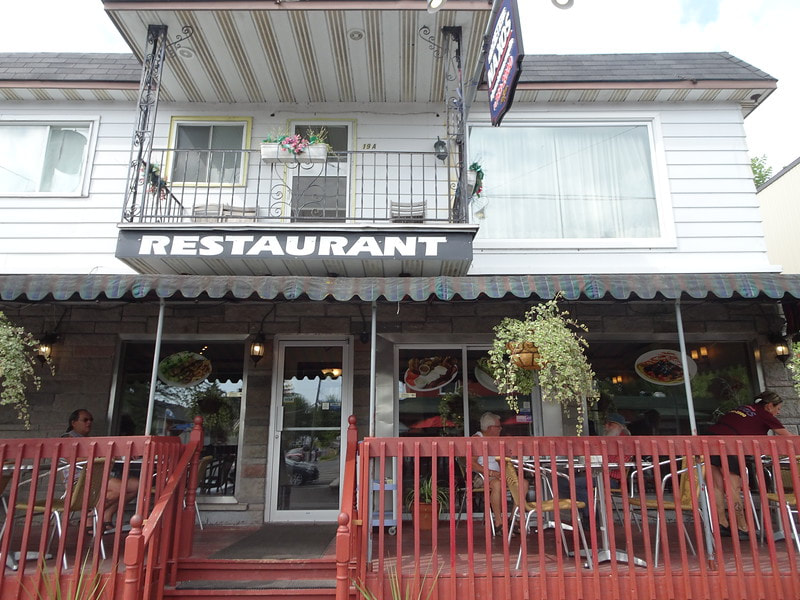 So we stopped for breakfast and took note of other items of historical interest.
Later came a swim and some light lunch.
On the return trip we explored some interesting paths nearby.
A.T. and G.T. discovered that they both share a common work history involving historical cannons. 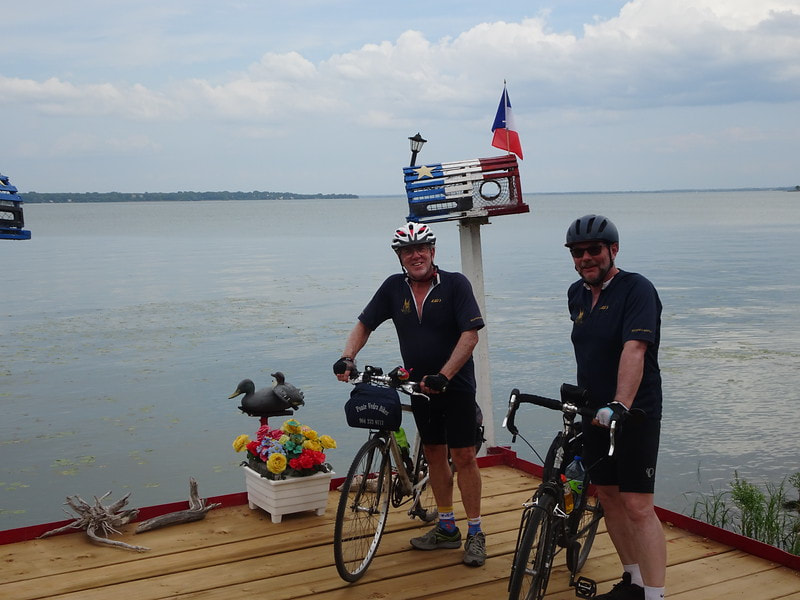 Present : G.T. Bishop, H.S. Tibbs & A.T. Lane  Minutes by A.T. Lane
Photos
After meeting at th Shaika, the members bikes over to Lachine to watch the evening cycle races.
There were three races of varying skill level and size.
Unfortunately part way into the elite final race, there was an accident and the race was postponed.
Just before dusk, the race was continued in a shortened fashion with the leading peloton given a small head start.  We had a pleasant night ride back along the river.
A few days later I came upon this video of the race on the Clan Knox facebook page, "The race seen from the inside".
15 August Sherbrooke Street Cards

Present :  H.S. Tibbs & A.T. Lane  Minutes by A.T. Lane
20 km
The members met as planned at the Shaika cafe, but rather than do the full ride to Parc Frédéric-Back, they did a smaller ride, distributing cards along Sherbrooke street.
20 August Sainte Anne de Bellevue

Present : A.T. Lane, Alice Hawkins, & G.T. Bishop  Minutes by A.T. Lane
Length of ride 87 km
Photos
Route
The members met at the Shaika Cafe, then headed out on the road, Alice being particularly optimistic about the day.
But alas, rather than continue on for lunch in Ste Anne, she turned back upon reaching the western border of Lachine.
Heading back to Montreal along the center of the island, we took as direct a route as possible, pausing only take note of the artwork until we were diverted by the back river. 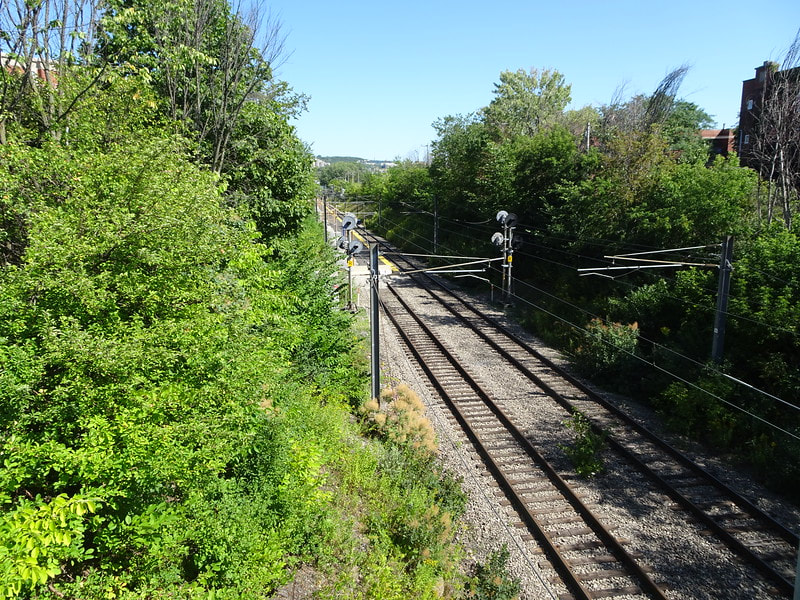 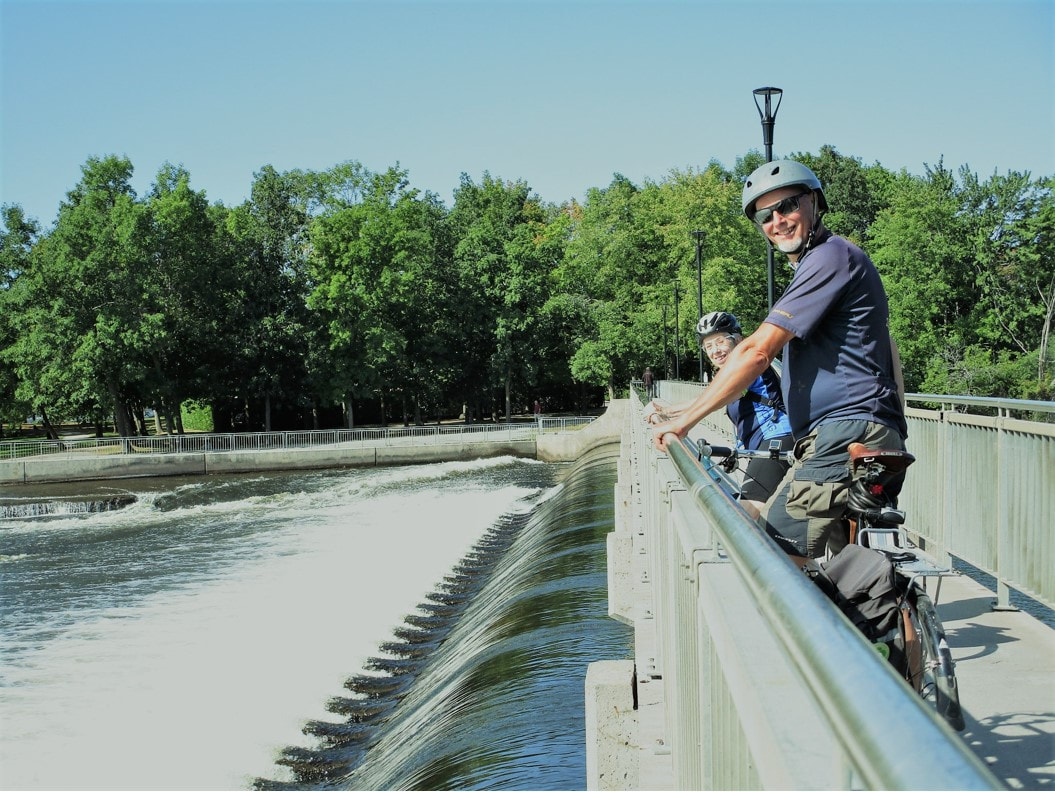 Terrebonne has a nice historic center and a scenic dam crossing the Rivière Mille Îles.
It also has the best forested bike trail in the Montreal region. 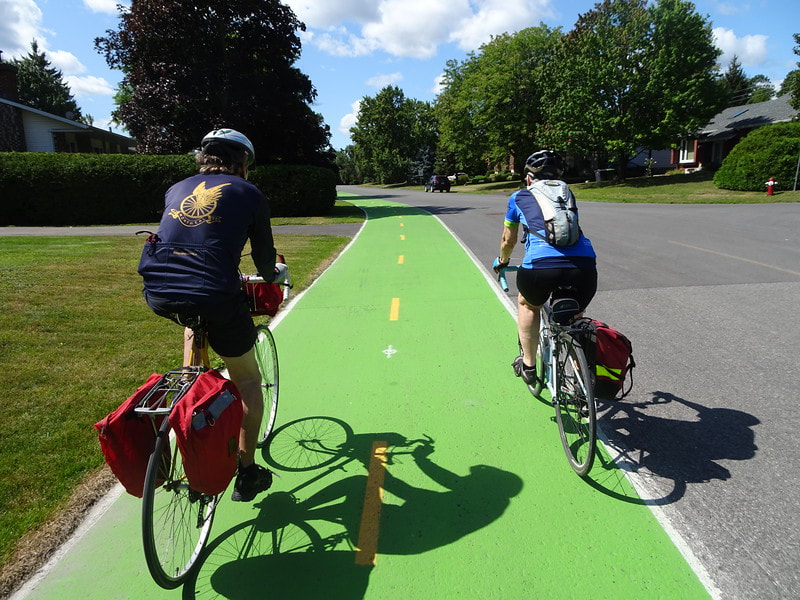 The town of Bois-des-Filion has some of the most clearly identified bicycle paths in the Montreal region.
25 August Île-Perrot Ferry

Present : John James Henry Strumey, & A.T. Lane  Minutes by A.T. Lane
Length of ride 81 km
Photos
Route
After taking the ferry from Lachine to l'île Saint-Bernard, the members rode out to a Beauharnois and a 2nd ferry to Île-Perrot.
Riding up the west side of Île-Perrot. they noticed the construction projects to replace ancient wood sewer pipes, and continued onto Ste Anne for lunch.
Returning to Montreal they passed by the Poine Claire Street fair and the PCYC's Fireball world championship.
27 August Pointe Fortune 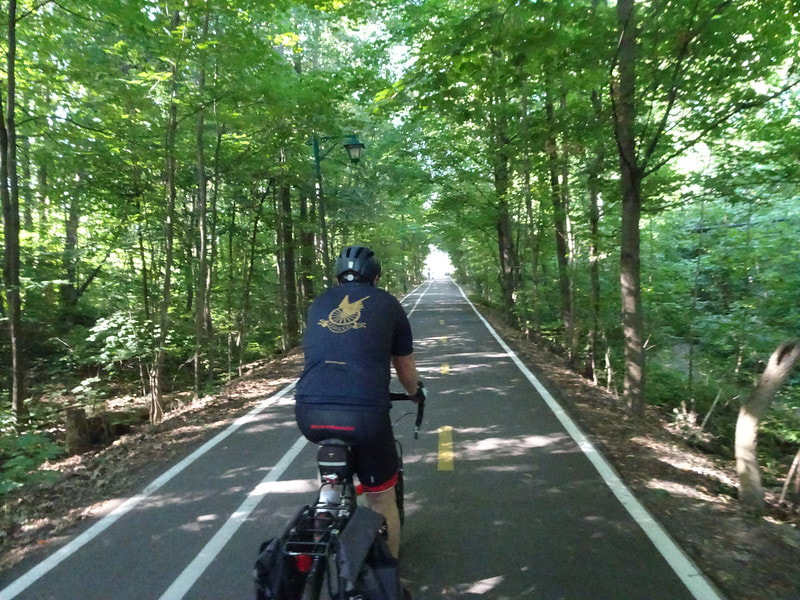 Heading out of Deux Montagnes, the members quickly needed to use their heads.
Traveling through Oka, they passed by points of past conflicts as well as more recent soothing herbs. 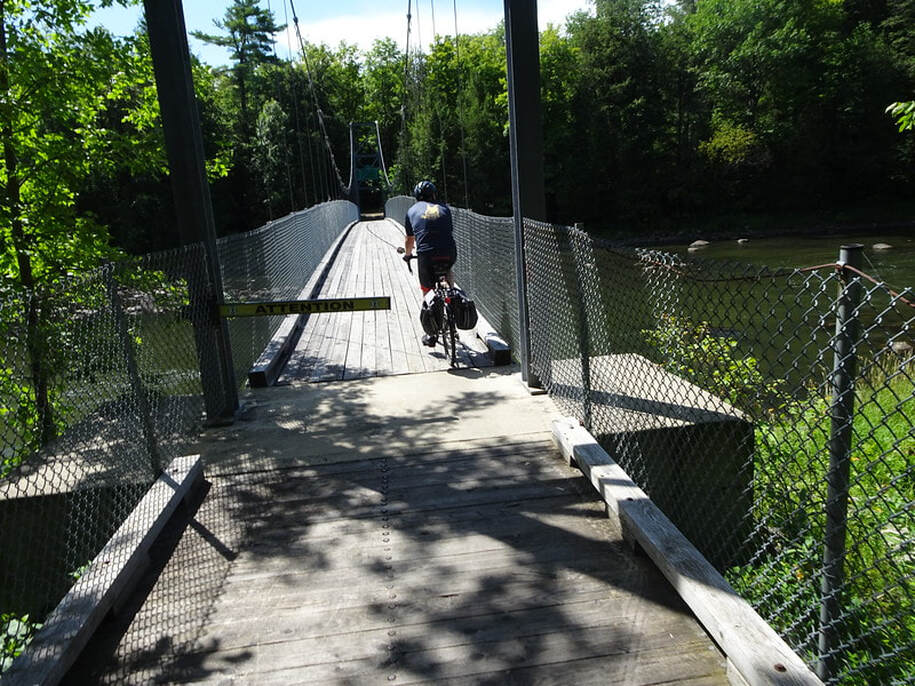 Taking in the sights of Saint-André-d'Argenteuil....
Near the Pointe Fortune- Carillon ferry is the Monument Québécois à la Mémoire des Héros du Long-Sault as well as the Carillon canal.
The members had lunch in Pointe Fortune, getting their sandwiches in a depanneur with a wide selection of fishing gear.
The members enjoyed exploring different routes through Rigaud.
They posed at some notable spots in Hudson, then continued on to Dorion and took the train to Montreal.
29 August Minnesota-Visitors-to-Montreal 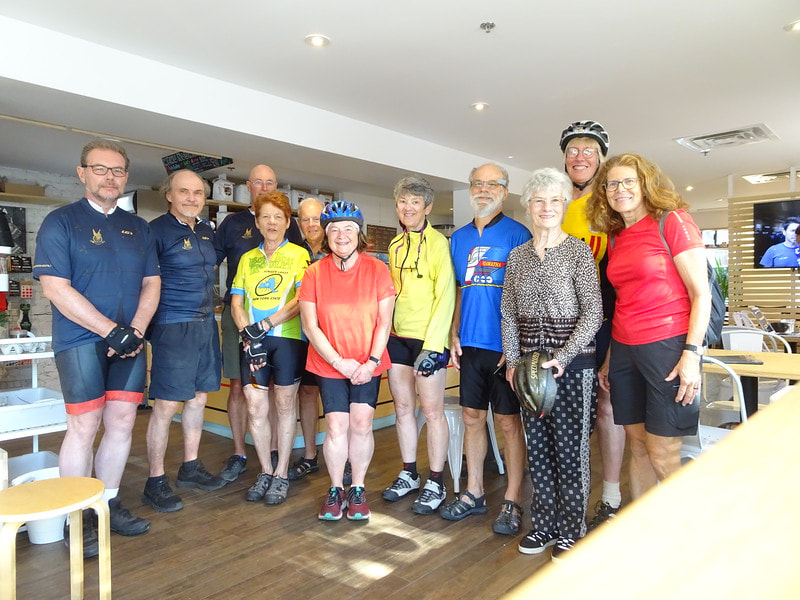 The Montreal Bicycle Club played host to a group of cyclists from Minnesota, taking them on a tour of the city. 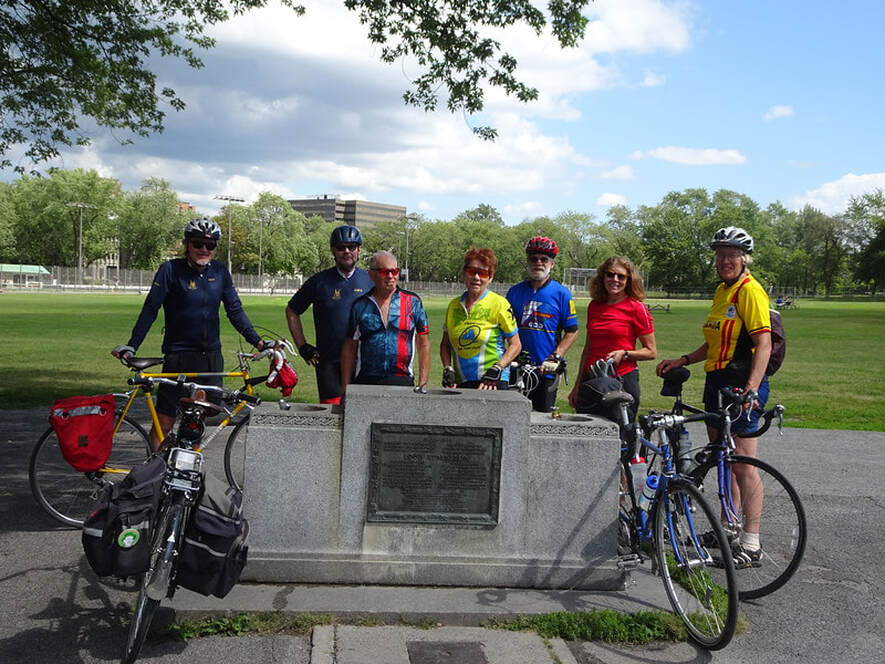 Highlights included the Angus Yards, Olympic Park, Vieux Montreal and of course, the Louis Rubenstein Memorial Water Fountain.
After lunch the group rode up to the top of Mont Royal,
Then proceeded back down the mountain, passing along the newly connected bike path on Cote St Antoine, to Sherbrooke Street.  A street that  sadly still lacks a bicycle path. 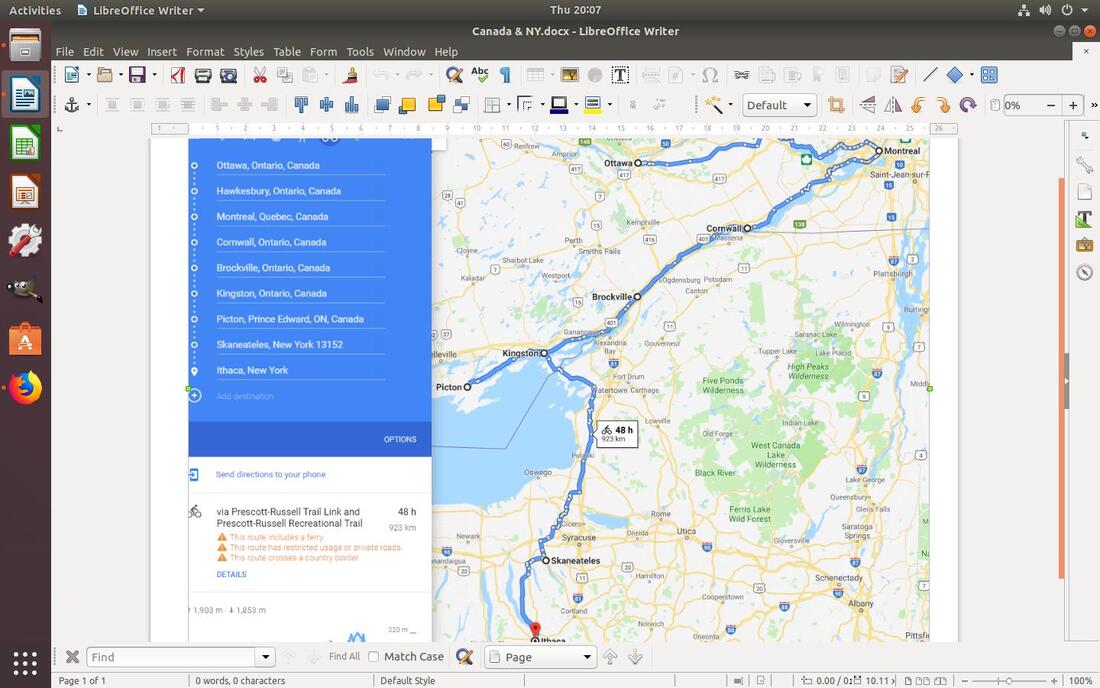 The club wishes them the best of luck on their trip from Ottawa to Montreal, en route to Ithaca.